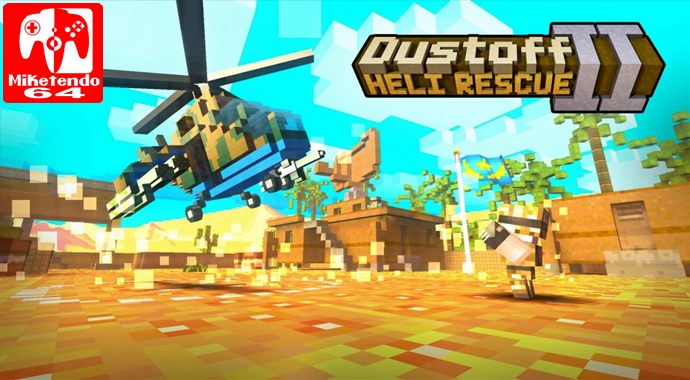 What’s that in the sky? Is it a bird? Is it a plane? No it’s a helicopter, ready to swoop in, protect the convoy and give Redfour a good hiding!

First released on the 30th of May, 2017 and developed by Invictus Games for mobile devices and tablets, Dustoff Heli Rescue 2 soon found itself getting the console treatment when it first launched on PlayStation 4 near the end of 2017 and then on Switch this very week and despite what you may have heard already, it is actually a pretty good port. No, scratch that, it’s actually a pretty good game, full stop. Said to run at 1080p when docked and 720p when in Handheld mode, Dustoff Heli Rescue 2, is a war game with a slight difference. Instead of being another war game where you are handed a gun and told to follow orders and kill the enemy forces, Dustoff Heli Rescue 2 has you sit back, relax and grab hold of a couple off joysticks because there are helicopters that need to be flown, soldiers in need of a rescue and a whole lot of bad guys that need blowing up and gunning down!

For what started out as a mobile game, which had a fuel system to limit how much you could play for free, a day, as a game for consoles, Dustoff Heli Rescue 2 has become something more. Even though the Switch version doesn’t even both with touch-screen controls that could have be used to navigate the menu screens and campaign map, but does have some cumbersome analog stick movements for the menu screens, the voxel visuals sporting, 2.5D side-scrolling action game that is Dustoff Heli Rescue 2 does feel like a good fit for Switch, due to its pick up and play nature, as each of the 35 missions it offers, often need no longer than 5-7 minutes to beat them.

Storywise, there is no story as such. You’re just a pilot in the army, battling the Redfour army, but that’s okay, because while Dustoff Heli Rescue 2 does the typical arcade game thing and have a very minor story, it is still a game that will task you with rescuing hostages, defending convoys carrying precious cargo and even dropping off cargo, to units out in the field, requiring certain goods. As for where these things can go down, across Dustoff Heli Rescue 2’s 35 levels, it features various terrains such as deserts, forests on fire, caves and even a snowy landscape where you’ll need to be careful, as snowstorms won’t only just affect how you’re piloted helicopter flies, but it can send you straight into a cliff and make you go boom!

On the subject of flying, instead of going for the usual “analog sticks controlling movements,” Dustoff Heli Rescue 2 does away with them, to instead replace them with shoulder buttons, with the L button being used to send the copter to the left and the R button, being used to go right. Should you use the two together though, you can ascend vertically, or use one of the two to slow yourself down whenever descending, so as land safely on any of the landing pads. Not only will a controlled descent limit how much damage you’ll take, but when landing inside your base, or at any landing pad available on any given level, you can use them to save your progress, use the coins you get from killing enemies and completing missions, to refill your life bar, or replenish your ammo, which is a must if you wish to beat a level in a single setting and not die. (Beating a level without dying will earn you a Star, as will completing the mission goal and beating the mission within a time limit.)

Now, another button you will need to know how to use is A, as it’s the shoot button, only instead of using it to shoot the enemy, all firing is done automatically when closer enough to the opposing force, but should you wish to converse ammo, you can press A to disengage your weaponry until pressing the button again to reengage it. But what about knowing where to go? Well, on the bottom of the screen, above your life bar, there is a radar that will dictate whether you should go left or right, tell you if you’re coming up on a landing pad, but it will also tell you where your forces are (indicated by blue markers) and where the enemy is as well (red markings.)

However, should the constant life and death situations not appeal to you, or you just find yourself unable to complete the missions you’re on, than maybe you should consider using the coins you possess for another purpose. As you play through Dustoff Heli Rescue 2, completing missions, new helicopters of the Attack and Cargo class can be unlocked, but you will have to buy them, much like buying new arsenal to use and attack. There are some great power-ups, but you’ve got to play long enough to beat their associated level and make sure you have plenty of coins to buy them. But once they’re yours, they are yours for keeps and they can make what was once a difficult level, an all too easy one. So, yes, if there was once a bothersome tank, a SAM launcher, or even a turret that proved too much for your skill, your new Apache-styled helicopter, will make it a fine of the past and the game will soon be over in no time. Still, just because you can beat the entire thing in around 4-6 hours to complete the game and get all 175 obtainable dog-tags and 105 Stars, don’t be surprised if you find yourself putting more time than that in Dustoff Heli Rescue 2, as it can swiftly become addictive and hook you when you’re least expecting it.

The action and its associated missions may get a little repetitive at times and the flying can take some getting used to, but Dustoff Heli Rescue 2, is a great little indie game that you can pick up and play at any time and do a mission or two before getting back to whatever it is your supposed to be doing at the time (work, school, eating, etc.) I realise its $14.99 price tag might be off-putting to some, since it is free on mobile devices, but it is more worth the asking price, to get the full experience from the get-go, as Dustoff Heli Rescue 2 is a game you will enjoy more than you realise. So if you’re looking for an alternative to Celeste or want Celeste and another recently released indie game on Switch, than Dustoff Heli Rescue 2, is a good choice that should surprise you.