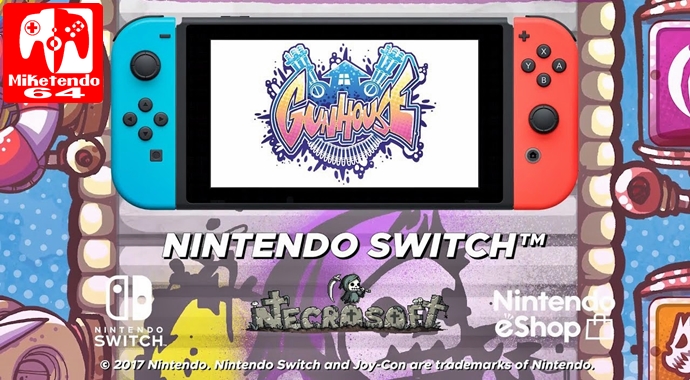 Gunhouse sure knows how to make a first impression. Between the in-your-face logo, bright graphics, and insanely funky menu music, you’re instantly drawn into its wacky and violent world. The story lays it all out for you: your orphanage is being attacked by all manner of crazy critters, and it’s up to you and your increasingly improbable arsenal to take care of business… through the majesty of match-4 puzzle mechanics.

The puzzle segments are pretty unique – the closest comparison I can make is perhaps that they play a bit like Panel de Pon (or Tetris Attack, for those of you who prefer gluttonous dinosaurs to adorable fairies). You move rows of blocks left or right, trying to make matches of four small blocks or more to create big blocks. Once you’ve made a match, you swipe the block off-screen to load weapons for use in the tower defense segments. Swiping to the left gives you a gun based on the type of block used (for example, a green block gives you a vegetable-themed gun while a blue block gives you an icy igloo gun), and swiping to the right gives you a special attack that essentially functions as a screen-clearing nuke.

It might sound like a lot, but you get the hang of it pretty quickly. You have to, since these puzzle bits last roughly 18 seconds before a door slams shut and you’re brought into the tower defense portion of the game to see the results of your performance. Here, hordes of enemies attempt to swarm your orphanage and make off with the helpless children inside – but it’s nothing the guns you’ve just set up can’t fix. With a mere tap of each gun, they automatically begin to fire in their own special way and (hopefully) annihilate all who dare oppose you. If enemies are bunched together, it’s best to use a Tesla gun and chain electricity between them for maximum damage. If they’re prone to moving around a lot, a homing shot from the igloo might be more suitable, and so on. Once all your guns are depleted or a certain amount of time has passed, you’re brought back into the puzzle mode to power up all over again. Between levels, you can even level up your guns, as well as buy new ones.

It’s a fun gameplay loop, and it goes on for as long as you want it to thanks to an infinite amount of levels, but it quickly becomes evident that there’s not a whole lot of depth here. The 3×6 play area of the puzzle segments offer little room for wacky chaining or combos like in other puzzle games, and the tower defense bits aren’t really skill based at all. It’s more of a casual pick-up-and-play game, then, which brings me to my sole complaint – the pricing. On mobile, Gunhouse costs a reasonable $2.99. On Switch? $14.99. As far as I can tell they’re identical in content aside from the Switch version featuring optional button controls, which the game was clearly not designed for and only slow you down compared to the touch controls. Unless you absolutely fall in love with the gameplay, what you get is not at all in line with the price tag.

At least the visuals and sound try their darnedest to give you some bang for your buck. The graphics are phenomenal, with an utterly bonkers art style that keeps you consistently enthralled despite the simple animations. The soundtrack composed by Disasterpiece is also worthy of high praise – the 27-second long loop that plays on the main menu alone is likely to have you grooving for a dangerously long time.

Great gameplay, awesome art, and some truly groovy beats combine to create a puzzle/tower defense hybrid that’s well worth checking out – just not for $15.