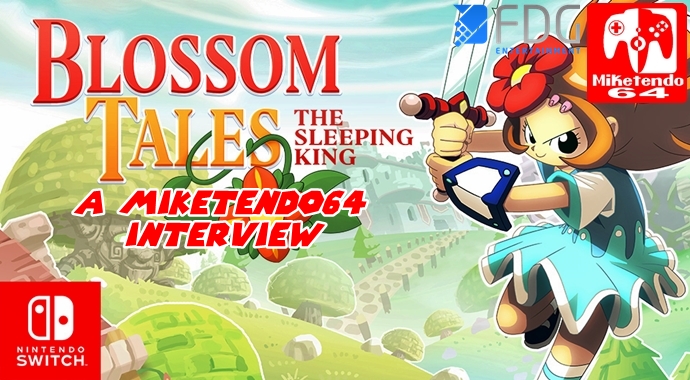 [Interview] From Kickstarter to Success on Switch! We Talk Blossom Tales with FDG Entertainment

With Blossom Tales: The Sleeping King, being the beautiful Zelda like game that it is and releasing this week, much like we had the opportunity to talk to FDG Entertainment about Oceanhorn and a made for mobile Zelda game, we also had the chance to talk a bit about Blossom Tales! So, in our usual fashion, here’s how we got on:

In typical interview fashion, would you be so kind as to introduce yourself to our readers and tell us a bit about your involvement with Blossom Tales: The Sleeping King?

Philipp Döschl: I’m Philipp, Co-Founder of FDG Entertainment and Executive Producer. I’ve been mostly overseeing the project from a distance, providing feedback and helping wherever I can. Now, before and after the release I’m handling most of the communication with press, reviewers, etc. and trying my best to make sure everybody hears about this wonderful game.

Thank you both, and now with the introduction out of the way, we can properly commence with the interview.

Blossom Tales in a Nutshell:

Miketendo64: For our readers who have never heard of Blossom Tales: The Sleeping King, what is it and what is the story behind it?

Joannis Xenakis: The story is being told in the form of a bedtime story from grandfather to grandchildren. The player will take on the role of Lily, Knight of the Rose to save the Kingdom of Blossom from eternal darkness.

Miketendo64: Although Blossom Tales did originally release on Steam, it is to be a console exclusive to Nintendo Switch. How have you found the porting process and how does it run?

Joannis Xenakis: Porting the game was a relatively easy process thanks to our partner Engine Software who we have had a positive experience with other games in the past. The game runs at 60 FPS in both handheld and docked mode.

Lily is Going Fast (Faster than before at least):

Miketendo64: Some complaints for the Steam released concerned no way to quick select weapons as various buttons, such as shoulder buttons on controllers, weren’t used. There was also no real way to re-aim the bow without shooting, and some slow walking, so for Switch, have any of these previous yet minor issues been addressed?

Joannis Xenakis: We’ve increased the movement speed slightly. This change will make it to the Steam version as well.

Miketendo64: Given the amount of love and hype Blossom Tales has been shown since its release, which then escalated when news of a Switch release came along, it does appear like Blossom Tales could have quite the successful run. So what are your expectations for its success?

Philipp Döschl: To be honest, the Steam release wasn’t that successful, as opposed to the Switch release. It took less than 24 hours for the Switch version to double the Steam version’s lifetime sales of about 9 months. So far we super happy with the sales and the response so far. The first reviews that popped up after the embargo lifted were very good and the response from players is phenomenal. The whole team made itself a very beautiful Christmas present. And personally, I’m very happy that the whole project is finally on track to hit the well-deserved break even.

Joannis Xenakis: Honestly, I just want the players to have a great time. We’ve put so many hours and love into the game and it seems like the game finally gets the attention it deserves on Switch.

The Reason Why there is no Video Capture for Blossom Tales:

Miketendo64: While not every game on Switch supports Video Capture, but is there a reason why Blossom Tales finds itself among them?

Joannis Xenakis: When the video capture feature was introduced we were relatively late in the development cycle. We really considered it, but didn’t want to take the risk of having to delay the game eventually.

A Story within a Story:

Miketendo64: Instead of being just the one thing, an epic adventure of Zelda proportions, there are instances the game pulls you out of the action, as grandfather reads his grandchildren a book. Other than being a Princess Bride tie-in, is there a particular reason this event occurs?

Joannis Xenakis: This form of narration was something we wanted to explore. It offers a lot of cool applications, like the kids interrupting the story, altering events, or arguing about what will happen next. In the end, not every idea made it into the game, but there’s a whole lot of them.

Changing Blossom Tales for the Better:

Miketendo64: Prior to FDG coming on as a publisher, Blossom Tales was almost something else entirely. Who approached who, and how has the game changed since you got involved?

Philipp Döschl: We approached Castle Pixel, the developer behind Blossom Tales. The game was on Kickstarter, unfortunately, the funding was not successful. We saw a gem in it and stepped in. The game hasn’t drastically changed in its core. However, when the game approached the finish line, we noticed it was lacking something. Joannis then sat down and put up a rework plan he pitched to us and the team with things he thought need to be changed, improved, replaced or cut. If I remember correctly, this was sometime mid-2016. We spent many hours on discussions, meetings and so on, the outcome of this is what Blossom Tales is today. The fighting system was changed, locations reworked, art was tweaked, etc… This rework and polishing took somewhere between 6 and 9 months and we extended the funding for the project. Bottom line it was the right decision and everybody in the team did a great job, both at Castle Pixel and FDG.

No Plans for a Blossom Tales Sequel, yet:

Miketendo64: While it may be too soon to say, because of the subtitle in Blossom Tales, are there plans to expand the singular game into a series by making a sequel?

Philipp Döschl: We haven’t thought about a sequel yet. We’re all pretty tired as we had a good but exhaustive year. We can’t wait to start our holidays in a couple of hours. When we’re back in two weeks, we’ll do an internal review and post-mortem, we’ll see what’s next from there on.

More to Come from FDG Entertainment:

Miketendo64: Given the old school Zelda like nature of both Oceanhorn and Blossom Tales, is this something we can expect to see more from you going forward, or is it just something that happened along the way? I’m not complaining, both games are great in their own right and you’ve definitely got an audience for both. But with Oceanhorn being the indie alternative to The Wind Waker and Blossom Tales being an indie alternative to A Link to the Past, it does make us a little hopeful that one day you’ll give us another Zelda alternative.

Philipp Döschl: How about an indie alternative to Breath of the Wild? No, just kidding. I can’t talk about the games we started in the past few months, however, it’s safe to say there’s something for everybody. You’ll see, we have a couple of cool games for both mobile and console.

Philipp Döschl: Thanks to everybody for your support, thanks to people and gamers like you and your readers we’re able to produce and publish cool games and bring some fun and joy to everybody! Merry Switchmas and a Happy New Year to all of you!

Having played and fallen in love with Blossom Tales twice in one year, what you guys over at FDG Entertainment and Castle Pixel have done, is nothing short of incredible. Blossom Tales: The Sleeping King is simply adorable and we hope its success on Switch goes on to be even greater. It’s exactly what guys deserve got giving us such a fantastic Christmas present!