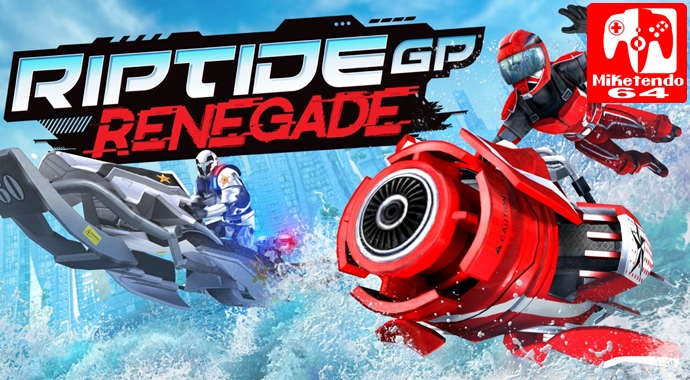 I have to hand it to developers of vehicle based games without mascot characters. They always know exactly how to keep me from giving their games even a passing glance. It’s all in the name, really – generic words like GP, Turbo, Moto, and Nitro generally signal to me that said game is likely a piece of uninteresting shovelware to be avoided. Most of the time, this line of thinking works out well – but there’s an exception to every rule, and Riptide GP: Renegade is indeed that exception. I’d even venture to say that this has proven to be my favorite racer on the Switch (after Mario Kart 8 Deluxe of course, but short of Diddy Kong Racing getting a miraculous sequel I suspect that’s unlikely to ever be dethroned).

The meat of the game is found in the Career mode, and let me tell ya – this is an impressive amount of single-player content for a budget game. For starters, there’s actually a story. Yes, a story… in a watercraft racing game. It starts off pretty hilariously, with your character being tricked into an illegal race and immediately spending two years in the slammer after being caught by the cops your rival called on you, but afterwards turns into a pretty typical “work your way back up the ranks to get revenge” tale. There are 5 chapters, each including numerous sets of events. Most of the time you’ll find yourself in a standard race against some CPU opponents, but there are also events where the goal is to pull off as many stunts as possible, elimination races where you have to constantly stay ahead of last place to avoid being knocked out, and even slalom levels where you weave inbetween colored flags. New courses and event types are steadily introduced throughout the story as well as additional playable characters and hydrojets, so you never feel like you’re stuck doing the same thing for too long.

That being said, my favorite parts of the game are still the pure, basic races. Riptide GP: Renegade is actually a port of a mobile game, but you wouldn’t know it from how high-quality the gameplay is. The physics are that perfect blend of being just loose enough to feel like you’re on water, but tight enough that missing a turn always feels like your own fault. Sharp cornering and drafting behind opponents are integral to staying competitive, but what really separates the men from the boys are the tricks. As you go through races, you earn cash to upgrade your hydrojet and purchase new tricks. Each trick is performed by pressing the analog sticks in various directions while in the air, and gives you a varying amount of boost meter based on how complicated the trick is and whether or not you’re spamming the same ones repeatedly. The key to victory is knowing how long of a trick you can pull off without wiping out upon landing, and getting greedy can quickly lead to a loss. Make no mistake, this is a skill based racer through and through.

The setting is also a huge highlight. At first, the game seems par for the course in terms of course design, starting you out in a vaguely futuristic city near a park. After a while though, you suddenly realize that you’re speeding past some wild stuff. A beach where ships are firing at a nearby military base, a desolate flooded city, and floating airships make up just a few of the crazy levels to be found. Even though none of it is pushing the system very hard graphically, it’s certainly one of the nicer looking mobile ports out there. The generic techno soundtrack isn’t nearly as impressive, but since a game like this with a big grindy campaign mode is the perfect companion when listening to podcasts, I found it to hardly be an issue.

Rounding out the package are some decent multiplayer options. 4 player split-screen is available, as well as online play. The lobbies aren’t incredibly lively, but the netcode works well and had no lag in my experience. It even has crossplay with the Steam version, for what that’s worth. It all adds up to ensure that Riptide GP: Renegade is one heck of a deal for just $10. If you’re in the market for another racer on your Nintendo Switch, look no further.

I won’t beat around the bush – this is an absolutely stellar watercraft racer that you should definitely check out. And hey, maybe if we all buy enough copies, Nintendo will take notice and make another Wave Race, eh?