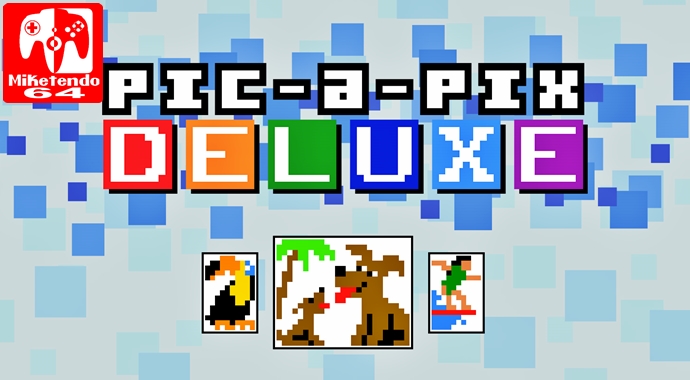 Pic-a-Pix Deluxe: Launches January 4th 2018 on Switch, with a Demo out on December 19th

With 2017 nearing its end with the passing of every day, there will come a point when we must start thinking about which well be the first game we buy for the Nintendo Switch when 2019 rolls round the corner.

Well, the good folks over at Lightwood Games have confirmed via email that Pic-a-Pix Deluxe, (an enhanced version of the colour picross game), will launch on the 4th of January for Nintendo Switch, with a demo that will be out even sooner as it will be available on the 19th of December. For anyone who likes what they see from the demo, they will be able to pre-order the game from December 19th and Pic-a-Pix Deluxe will cost: $7.99 USD / £6.99 GBP / €7.99 EUR / $11.99 AUD.

And now here’s an overview made up of comments from Lightwood Games:

So what makes it “Deluxe”, compared to Pic-a-Pix Colour on Nintendo 3DS and Wii U? There are 150 brand new colour Pic-a-Pix puzzles, designed by Conceptis. When solved, they make gorgeously cute pieces of pixel art and, of course, every puzzle is uniquely solvable using logic alone. There are also 150 black and white puzzles, the kind you’d think of as a picross puzzle if you’d never seen our colour game before! Colour Pic-a-Pix tend to be a little easier so I know experienced players will appreciate the extra challenge of going back to black.

In total, that’s 300 new puzzles – twice as many as the previous game! The puzzles got bigger too! On Nintendo 3DS, the largest grid possible was a 20×20. In Pic-a-Pix Deluxe, there are puzzles up to 35×25! Of course, as it’s Nintendo Switch, you can play with a friend – or several friends! Just connect extra controllers and up to four players can solve any puzzle in the game together. Four players on a small puzzle is a bit hectic, but you could have the whole family work together on a larger picture, or just ask someone to drop in when you need a hand.

Handheld mode has touch screen controls – the first Picross game on Switch to include this feature 😉 You can touch the grid to paint squares or move the cursor by dragging at the side or top of the puzzle. This way, you can use touch controls even if your finger is too big for the squares, but direct input is still possible if you own a third-party stylus!

For those who did not play Pic-a-Pix Colour on Nintendo 3DS or Wii U, the puzzles included with that game will be available as launch day DLC. More DLC packs with new puzzles will be added throughout the year.

Lastly, we also have a gameplay video we can share that shows off a small puzzle being completed, whilst the game is being played in co-op. Enjoy: