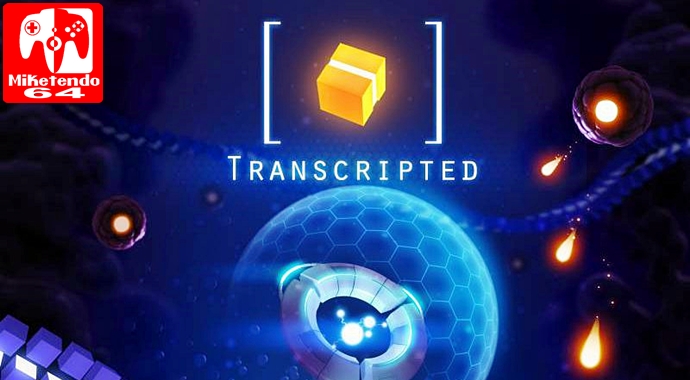 Given the amount of Match-3 type of games available on mobile devices, odds are everyone has played at least one and why wouldn’t they? It is a simple concept that every now and then, a new game tries to change this formula a little and give it a breath of fresh air. And then, we have Transcripted, a game that tries to add something new to match-3 games by merging it with a different play style.

Developed by Alkemi and out on the Nintendo Switch as of the 23rd of November, Transcripted is a game that mixes your usual match-3 puzzle game with a twin-stick shooter and has 25 campaign levels and 6 challenges and there is also a skill tree to improve the nanoprobe according to your needs.

As soon as you start the campaign, you are introduced to 3 characters that are involved in the story: Adam, your character that controls the nanoprobe under the command of Professor Dahl, the boss responsible for the research, and NADIA, the AI and your guide as you fight through the levels. In the story, you and NADIA are controlling a nanoprobe as you try to discover more information about a disease, how to eliminate it and some secrets before the infection spreads.

A game like this didn’t need to have a serious story, but the fact that it has, helps contextualize the game and makes for an interesting inclusion. The performances by the actors aren’t terrible, but it lacked a bit of emotion in a few sentences near the end and although I didn’t expect a mindblowing story, what we do get is a good one with a few plot twists.

To complement the story, the game presents a soundtrack that fits the game well, but I didn’t find one that was catchy or really memorable. Even then, it fits its purpose and sets the tone of most of the stages nicely. Also, the general presentation is good as the game has a consistent thematic in its menus and in-game, that evokes the DNA thematic, and the HUD, the evokes the panel of a sci-fy machine, and was well-thought most of the time. During gameplay, the colors in the pseudo-DNA differentiate from the the other elements, which helps keep the focus and easily comprehend what color are in the chain.

My only real complaint about the presentation is the texts. In TV mode, they are acceptable, although small, but when you get to portable mode, they are very small and I had, sometimes, to force my eyes to be able to read it. Another idea I would like to express is that HD Rumble support would have benefited the gameplay and made it feel like an great Switch experience, as opposed to a good one.

But even with all the setup, if the fusion of game styles wasn’t done properly, it wouldn’t work. But it does, even with some small problems in a few of its ideas. The base gameplay is that you have to destroy deadly pathogens, by shooting at them, and they will drop cubes. By passing over these cubes, you capture it and can throw at the Pseudo-DNA, trying to form pieces with 3 or more of the same color and even chains of elimination, until you fill a DNA bar in the top of the screen.

Most of the stages follow this basic format, and it works, but it took some time to click with me on how to fully proceed with the mechanics and HUD and learn the new enemies that are presented along the way. The game has a few helpful tutorials/hints the pop in the corner and you have to press X to read, but you’ll want to open them in moments, in which you aren’t overwhelmed by enemies as it is easy to take damage when you return. But when you get the hang of it, you will feel that everything gets easy and flowing.

When the game tries to bend the rules to make for a different experience, that’s when I felt that it didn’t hold up as well. They do this in 2 different ways: boss battles and defend the pseudo-DNA. Every 5 stages the game presents us with a kind of boss battle. I don’t feel that it is very necessary for this kind of game, but a few of them are well placed in the story and fit the mechanic, asking you to remember and use things you lived through the last stages, but none of them were really memorable to me and in one, they totally forget the match-3 part of the game, which breaks the flow a little and I didn’t feel challenged by it.

The stages 11, 12 and 13 invert the game and asks you to protect the pseudo-DNA from being destroyed. This concept could have been great if perfectly executed, but they weren’t and instead, we got something a little bland and mediocre. Because you don’t have full view of the pseudo-DNA and it also moves, even if slowly, it wasn’t uncommon for me to be trying to avoid it to be destroyed in one place, but in the part that I couldn’t see, it was destroyed and the DNA chain moved and I accidentally helped destroy the chain. I had to stop playing level 13, because I was getting nervous.

One thing that I really have to praise the game for is the ability to adjust the difficulty level for the twin-stick shooter and for the match-3 separately, allowing a person that is better in one to adjust the settings to match their skill. Also, the skill tree helps adapt the gameplay even more to your playstyle and makes you feel more prepared and ready to face a new level. Leveling up skills is easy and I hardly needed to repeat a stage to get better and, consequently, more XP and when I needed/wanted to, almost never it felt like a chore.

Finally, there are 6 challenges in which you have to play with only specific upgrades and weapons in search of the highest score possible and a place in the leaderboard. They offer a fun experience that is only limited by how long you can survive and feel progressive as you need to get a certain amount of points in one to unlock the next.

Transcripted tries to mix 2 types of gameplay and while it could have been a bad game,  fortunately, it’s not, as it is able to maintain a good quality experience throughout. There are however some bugs and missteps, but they’re nothing a few updates can’t help fix most of them. As for the price, given the fact it only costs $7.99 US dollars, if Transcripted is the kind of a game you’d happily play, I would recommend picking it up as it is something some Switch owners will greatly enjoy.