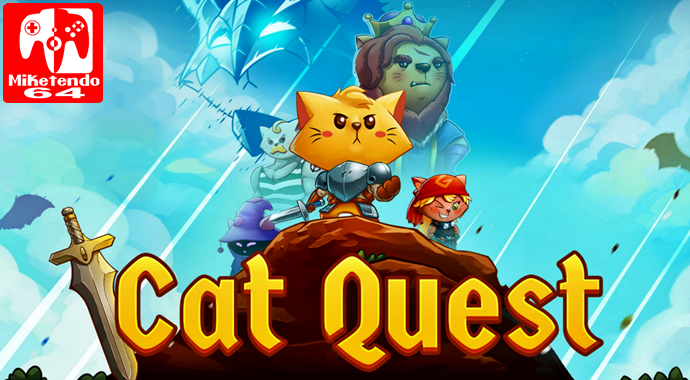 One of the greatest things about the Switch is its hybrid nature. When you want to play an epic, meaty game like Super Mario Odyssey or Breath of the Wild, the dock is waiting for some big screen action, but when you want a quick burst of fun, games like Puzzle Adventure Blockle and Kamiko are there to keep you company in handheld mode. With its huge map size and easy-to-master battle system, Cat Quest is an action RPG that seeks the best of both worlds, but unfortunately falls just a bit short of the mark.

Cat Quest claims to be an open-world RPG, and while it may be playing fast and loose with the traditional definition of “open-world” it’s not too far off the mark. Once you’ve completed the basic tutorial, you’re given the freedom to explore nearly every inch of the map to fight enemies, complete sidequests, and obtain stronger gear. I found that I’d acquired enough experience to reach Level 26 before I’d even begun to touch the main story quests. Combat is typical hack ’n slash fare, although you’re also given the ability to obtain magical spells that allow you to harness fire, ice, and electricity, as well as other tricks like creating spiked traps and healing yourself. It’s all good fun for the first hour or so, but it soon becomes apparent that Cat Quest’s biggest problem is also its most subjective: the repetition.

Simply put, you’ve seen everything this game has to offer within mere minutes. Players with any skill will quickly realize that it’s possible to take on what should be late-game sidequests and enemies from the very start of the adventure since the combat remains static throughout. Run up to an enemy, spam attacks and magic, dodge out before they hit you, rinse and repeat. Since neither story nor side quests ask you to do anything but go to an area and clear out an area full of enemies, whether or not this quest is worth your hard-earned cash is entirely down to whether or not you enjoy the combat enough to spend 8-10 hours doing the exact same thing over and over. The lack of variety in the game’s presentation doesn’t help matters. Visually, the game has a nice clean cartoon style that looks fantastic, but there are very few environments to explore. Dungeons and caves all look nearly identical, and the locales found on the main map aren’t particularly varied either. The music is equally samey, with generic fantasy tunes and repetitive jingles serving as the score to your tail.

Whoops, did I say tail? I meant “tale”. Sorry for the slip-up, but after suffering through this game’s writing you might just have the same pawblem- er, problem. It’s great when a game doesn’t take itself too seriously, but Cat Quest’s plot is almost entirely inconsequential. I found myself quickly skimming through most of the dialogue as nearly everything involves a generic fantasy trope or a corny pop culture reference. Ha ha, there’s an archaeologist named Cara Loft. Ho ho, a character talks about watching the show House of Parchments starring Hank Overwood. In addition, the cat-related puns that permeate the game get tiring very quickly. There’s only so many times I can see a character wax poetic about how paws-itively purr-fect my fur-ocious battle skills are before I want to claw my eyes out. Have we learned nothing from Bubsy?

Ultimately, there’s simply not a whole lot to say about Cat Quest. The writing is uninteresting, the combat is swiftly mastered, and tedium is quick to set in when playing for long stretches. This feels like a game much more suited to mobile devices where you’re likely to enjoy it in short bursts, and unsurprisingly this is also available on phones for a whopping $7 less. If the premise of a casual open-world RPG interests you and a lack of button controls aren’t a dealbreaker, perhaps consider checking this out on a different platform.

Cat Quest spreads a thin amount of gameplay over a lengthy journey, but if you can stomach a lot of repetition and some extremely cheesy dialogue, you might just find that this kitty has its claws in you.