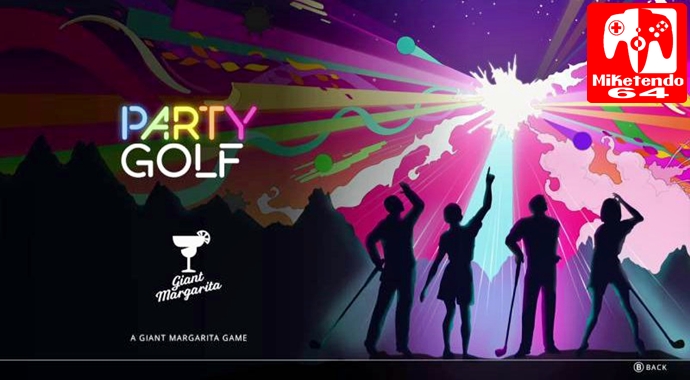 For most gamers, golf games are a love-it-or-hate-it affair. Some can’t get enough of the hitting the links, checking the wind speed and direction, making sure you’ve got the right club selected – others just find the whole ordeal to be a complete bore. Party Golf tries to bridge the gap between these two disparate groups by simplifying the genre’s traditionally complicated controls, setting it on a 2D plane, and letting up to eight players go wild with every gameplay modifier they can imagine. What you’re left with is one heck of a multiplayer game that’s a little more Party than Golf, but sure to be a good time no matter which side of the green you stand on.

Upon starting up the game you’re presented with the immediate option to play a Quick Game, but don’t be fooled.  While playing a no-frills round of golf has its charms, it doesn’t have the staying power to last for long, and that’s where the Game Modes come in. Party Golf comes preloaded with over 100 rule variants ranging from the simple (least shots wins, giant golf balls) to the insane (golf sumo wrestling, Flappy Bird golf). Want to give your golf balls some wacky shapes so they’re near impossible to get into the hole? You can do that. Want to make every player’s ball stick to each other when they touch, forcing them to work together to reach the hole? You can do that. Want to play a round of Golf Deathmatch where you forgo reaching the hole in favor of straight up killing your opponents?… Well, unfortunately that’s not an option, bu- no, wait, you CAN do that. Name a nonsensical and/or moronic way to play golf, and you can probably do it in this game.

Don’t think you’re limited to what the game gives you either. Should you come up with some kind of bizarre variant that even the developers didn’t manage to think of, simply create your own custom rule set and tweak everything to your heart’s desire. You can change the flag position, set whether the edges of the screen kill you or harmlessly bounce you off, even change the gravity. There a seemingly endless amount of options – so many that the game even gives you a good 6 warnings not to touch various aspects of it unless you’re an advanced user that experienced with the game, lest you unwittingly… make a crappy game mode? It’s all perhaps a little heavy-handed for a silly golf game, but with so many game mode presets you may never even need to touch the editor anyway.

With multiple players (the default limit is four, although there’s also an eight player shared-controller mode that I couldn’t quite figure out how to activate) Party Golf is a blast, but unfortunatelym the single-player content is a bit lacking. The game allows you to play with AI and give them different difficulty settings such as Angry, Thoughtful, and Twitchy, but regardless of what you do they refuse to play anything but standard golf and will under no circumstances use any power-ups or abilities, leading to dull matches where you easily trounce them by simply using the basic tools given to you. There’s also a Trials mode which initially sounded promising, but actually just turned out to be a series of endless endurance challenges to see how many courses you can complete under various special conditions and with a shot limit. Again, fun with friends, but a total snore by yourself – and there’s no online play, so any solo gamers looking for a great golf experience on their Switch are better off checking out Golf Story.

Both visually and aurally, Party Golf gets the job done and nothing more. Every course is comprised of the same extremely simple pyramid background and plain dotted foreground, and the music… well, I sure hope you like nonstop techno. There’s a clear focus on substance over style here, which makes Party Golf’s somewhat poor performance a bit disappointing considering how little seems to be going on under the hood. Although it’s far from unplayable, there’s occasional stuttering to be found during gameplay, the auto-playing videos in the menu (which appear to be taken from the PS4 version since Sony mascot Toro can be seen as one of the player’s avatars – is this his first appearance on a Nintendo platform?) always glitch out at the beginning and awkwardly freeze at the end, and the game even crashed on me at the end of a round. These issues were a very small blemish on an otherwise enjoyable experience, but they’re worth noting nonetheless.

If smacking a rocket-powered banana-shaped golf ball into a hole while dropping mines to blow away your friends sounds like your idea of a good time, Party Golf is the game for you. If it doesn’t… what’s wrong with you?