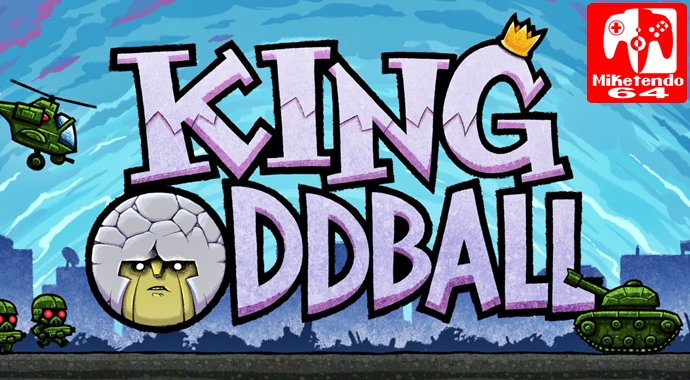 10tons domination of the Switch’s eShop is continuing with King Oddball, a one-button physics-based puzzler about ending the world. There’s not much to the game, but it is a satisfying little puzzle title built around a simple, addictive gameplay hook.

You are tasked with defeating the humans in King Oddball, to do so you must simply press “A”, or tap the screen with correct timing to release a boulder from the circular King’s long, sticky tongue that waves from left to right at all times in a semi-circular motion. If you time your shot just right you can get your released boulder to smash into (and destroy) all tanks, foot soldiers and helicopters in one turn. In most stages you are given three boulders to play with, if you chain three destructions in a row, you will win a boulder back. If you manage to hit yourself with a boulder, you will get to use the projectile again. It’s simple, addictive puzzling at its best.

It plays like a simpler version of Angry Birds or the fantastic Boom Blox games of Nintendo Wii fame. You line up your shot, fire and hope for the best, that’s all the game asks you to do. You can play the entire thing with one hand. This isn’t surprising given the game’s iPhone origins. There is a little more to the game than just tapping the touchscreen or pressing “A”, however. If you mess up, a press of the “-“ button will restart the level for you (or a tap of the restart symbol placed in the top right of the screen. You can also pause the game by pressing “+” (or with a tap of the pause symbol). You will be restarting the stages a lot, so the “-“ button will see a lot of use here.

As with most physics-based puzzle games, there is a lot of trial-and-error involved in King Oddball. You will scream in agony as you send your last boulder through a small gap and out of the screen instead of hurtling it towards an enemy’s unsuspecting face (I say unsuspecting, but they all just stand there, seemingly waiting for their grisly untimely demise at the tongue of their circular King). You’ll mostly breeze through the game’s 120+ stages, but there were a few that made me sweat (one in particular, took me around 30 attempts to beat). Just remember how the boulder rolls and bounces off each enemy and obstacle, learning the game’s physics will help no end! While the game isn’t very difficult to beat, you will never tire of seeing one boulder successfully take out all enemies on screen. It’s a very satisfying feeling throughout the five or so hours you’ll spend on King Oddball.

During these five hours, you’ll never complain about repetition, despite the game’s repetitive nature. Each stage is similar, yet different. You’ll have to tackle obstacles such as bricks that take a couple of hits to destroy, sand bricks that slow your boulder to a halt and shielded enemies that require more than one hit to take down (later on in the game, some enemies and even bricks will be surrounded by multiple shields). The difficulty scales naturally so you won’t have to deal with red-herring shielded bomb blocks until late on in the game for example. Indeed, there is more to the game than the standard level-after-level technique its peers employ. You are graced with a simple map screen in King Oddball that consists of nine large squares with a good number of stages in each. You can tackle any of the stages in whatever order you like, but you cannot move into the next block of stages until the current square is finished – the world map will fill with colour upon clearing each block in a nice touch.

Indeed, there is even more to the game than this. Some blocks will come with a different stage icon that includes the likes of overall statistics, smart bonus worlds and even an achievements list. The best of this lot are the bonus worlds. One sees you attempting to tackle each stage armed with just one boulder, another gives you a grenade (that takes a little while to explode) and one arms you with Unicorn horns instead of boulders. In fact, when I played through the game (over Hallowe’en, hence the screenshots), the boulders were replaced by pieces of candy and the King himself was wearing a pumpkin crown instead of his standard attire. I wonder if something similar will happen at Christmas? Little touches such as these make King Oddball more enjoyable than it perhaps should be.

Despite the little touches and neat gameplay, King Oddball feels cheap. You won’t pay much to play the game, but it doesn’t do much at all to wow. The art-style is cool and quite eccentric, but the enemies are bland, lifeless things. You’ll wish there were more things to crush, or at least that what you were crushing fought back to some extent even by moving just a little bit (the helicopters do) or by being far more animated even in a stable state. It looks like a free smartphone game and it is indeed free to download on iPhone and Android. The soundtrack, too, is bland, repetitive and forgettable, even becoming annoying at times when you have to replay a stage for the twentieth time. It’s a polished enough product but it feels cheap and will never win any awards. The thing is though, it doesn’t have to. King Oddball is a decent puzzle game that’s perfect for short bursts of play, just as it would be for free on your smartphone.

King Oddball is a decent little puzzler with quite a few neat little tricks up its sleeve to add depth to its simple, one-dimensional gameplay. It’s a cheap game that will give you a good few hours of fun enough puzzle gameplay perfect for short bursts thanks to its addictive nature, but you’ll have just as good a time with it on your smartphone, entirely for free if you smartly avoid micro transactions. The satisfying feeling of destroying all enemies on screen with just one boulder will never go away, but you may feel a little silly for paying for something that is free and just as much fun on your phone.

P.S. Keep an eye out for the moustaches that appear from time to time, you may just unlock something pretty cool.