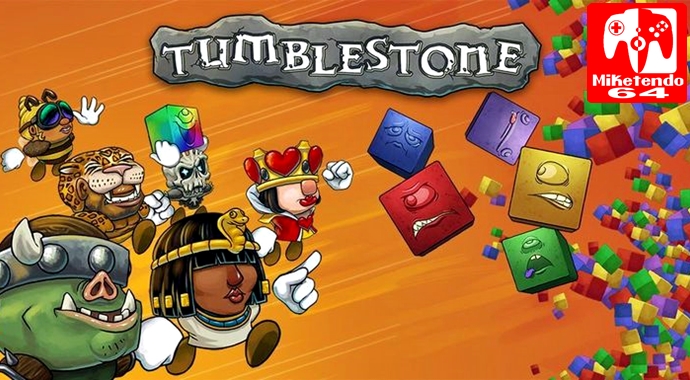 When it comes to Nintendo Switch vs Nintendo Wii U, the Switch wins virtually every battle going, but what about the battle of The Quantum Astrophysicists Guild’s Tumblestone on Wii U vs Tumblestone on Switch?

Previously released on a whole range of platforms, which includes smartphones, on the Wii U, Tumblestone was a pretty good indie game and now thanks to its recent release on Switch, it is back in the hands of Nintendo fans once again, but while it is still very much so the game fans and players know it to be, the Switch version is a touch different. Online multiplayer is gone and there no new features and content of any kind, so first impressions, things aren’t off to a good start.

But hey, let’s not outright shame it just yet, because Tumblestone still has plenty of fight in it and this review is still just starting, so let’s talk about what the game does have. For starters, it has a Story Mode comprised off 11 worlds and can easily take 40+ hours of hardcore, up all night gaming just to beat the whole thing. Then again, why spend your nights playing it, when on Switch, you can take it and Tumblestone anywhere you want thanks to the console’s portability? With relatively short levels that get progressively harder with every stage, any time is a good time to whip out Tumblestone and give it a play as both a single and a shared experience due to the fact that local multiplayer is still very much so alive.

Now, with regards to how it plays, for all intents and purposes, on the surface Tumblestone looks like your simple match three puzzle game, but in reality it is anything but. In order to match three, you have to actually be able to shoot three Tumblestones that are the same colour consecutively, because failure to do so, is grounds for failing, which means it is time to restart the level! What makes it worse is you can only shoot the blocks that are unexposed and on the “bottom row” of their corresponding line, so even if you do have plenty of options available to you, without the right strategy, failure is the only thing you will encounter, and with Tumblestone getting immensely harder right from the get-go, by no means is Tumblestone an easy game.

In fact, despite how easy it’s graphics would make you think the game is, it can get nightmarishly hard before you even finish the first world, but the good news is, even if you can’t for the life of you, figure out what needs to be done and when it needs to be done on any given puzzle that happens to stump you for quite some time, while Tumblestone is in fact a lengthy single player game that features leaderboards, Quests (a whole bucket load and then some,) but it’s also a pretty good multiplayer game as well.

With support for up to four players, there is never a reason why a bunch of you can’t just get stuck right in and race to see who can clear a puzzle the fastest in Puzzle Race and decorate the screen a tad, by playing as one of the many different characters that can be unlocked via progressing through the game, as can modifiers. Or you can try your hand at one of the other two multiplayer games which are Tug of War and Battle and on the off chance you don’t have anyone to play with and still want to play some multiplayer games, you can always battle against a team of bots whose difficulty can be adjusted all the way up to Nightmare Bot and yes, bots on that setting, do very much so live up to their name.

But if the multiplayer games aren’t enough for you and you’re not quite ready to learn what became of the Tumblecrown (Story Mode events,) there is one other thing you can try and that is Arcade. With Arcade, three other games are available for your gaming pleasure and they are Marathon, Heartbeat and Infinipuzzle, which is another thing that lives up to its name as Infinipuzzle is puzzle in which there are Tumblestones waiting to be matched and you can just keep on plugging away until you finally come undone by making a single mistake!

Personally, Arcade really didn’t do much for me as the games seemed a tad on the dull side compared to the main story, which introduces new mechanics with almost every other level when starting out, but the local multiplayer mode is the best place to go to make Tumblestone be the best that it can be and even if you spend all your time there playing and not in the main story, where you can unlock other characters, than worry not. Should you visit the options and turn on Party Mode, every modifier and character can be unlocked for multiplayer and sure you will forsake being able to save your stats of whatever you do when playing with Party Mode activated, but the price is worth it, just like the actual game.

If it wasn’t for the fact that Switch does allow you to play Tumblestone anywhere, at any time, there really wouldn’t be a good incentive to buy the Switch release since it is by no means the definitive version, as the Wii U does win this particular round. However if you do love a good puzzle game of sorts and have never played Tumblestone before, than purchasing it now is a sound investment as it is packed with quality content that can be enjoyed by most who are willing to give it a go.