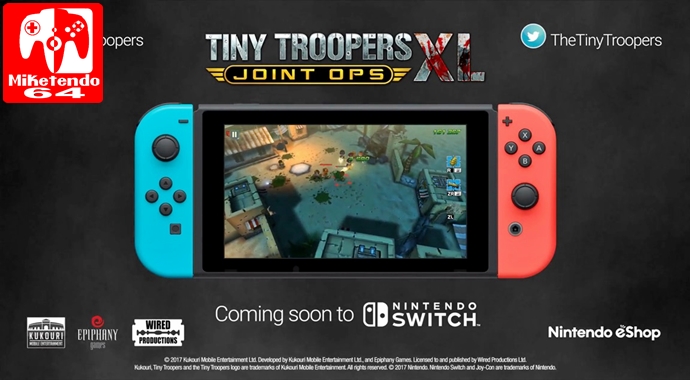 Looking for some more twin-stick action for your Nintendo Switch to satisfy an itch Neon Chrome and NeuroVoider, can’t quite touch? Well you’re in luck, because a little later on this year, Tiny Troopers Joint Ops XL is coming to Switch and you can read the news for yourself, right here:

The most decorated release of Tiny Troopers ever, Joint Ops XL allows perspective soldiers to make full use of the Nintendo Switch’s touch screen, or use the Joy-Con controllers or Pro-Controller for classic twin stick control, as they:

Tiny Troopers Joint Ops XL is an epic bite-sized arcade shooter, filled to the brim with action-packed mini maps of mayhem! Take control of your tiny troopers as you battle evil adversaries from around the world with a multitude of weapons. Recruit specialist mercenaries such as Medics, Machine Gunners and the Elite Delta Force to subdue enemy insurgents! Collect medals, dog tags, Intel and more during the course of each mission to ensure victory.

“Tiny Troopers is a modern arcade classic and simply great fun from start to finish.” said Leo Zullo, Managing Director, Wired Productions, “It’s a perfect game to play on the go and the flexibility that players will have on Switch will be an unparalleled experience.”

Tiny Troopers Joint Ops XL will be available through the Nintendo eShop in time for the holiday season.