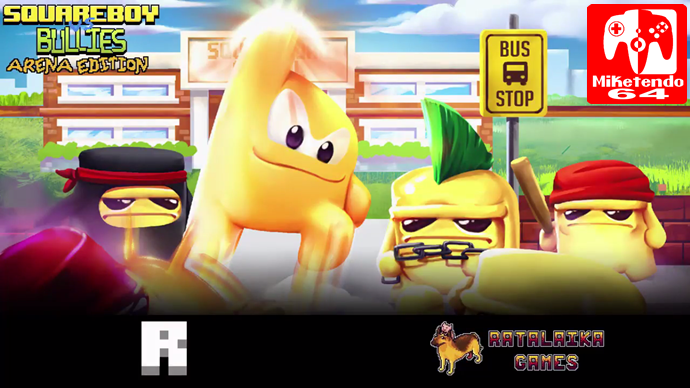 I’m going to be honest, if you told me a couple of months ago I would play a game where I’d play a yellowed coloured Squareboy, who is not a boy that is square-shaped and does battle against bullies, I would have laughed in your face. Just messing, I wouldn’t have done, but I wouldn’t have believed you, but this weekend I did just that and now it is time for me to share my thoughts on what is the latest game that Ratalaika Games has lined up for the Nintendo Switch and yes, just like it’s title implies, Squareboy vs Bullies: Arena Edition is a game about fighting bullies!

Now allow me to properly start by saying the game is not perfect and it is maybe a little too short for its own good. Sure Squareboy vs Bullies may have been fine when it released back in 2015 as a game for mobile platforms, but Squareboy isn’t just on mobile platforms anymore. It’s coming to Steam, PlayStation Vita, Nintendo 3DS and Nintendo Switch and while the game has been improved and tweaked to be a game that will work as both a handheld and console title, it could have done with a bit more done to it.

Granted developer Rohan Narang has added an all-new arena mode that is comprised of 4 stages and exclusive to Nintendo Switch support for local co-op that applies to both Arena Mode and Story Mode, but this dog could have done with a bit more bite. Packed with 14 achievements and 14 levels in the game’s story mode, the levels are a little too long winded for their own good. Had they features some sort of gimmick or bar to detail your progress, it would have been alright, but it doesn’t. Instead all you can do is try to stay alive for as long as you can before collecting the medical kit to recover life, while taking on a whole bunch of bullies until you’ve beaten just enough, to move on to the next area of any given stage.

Doing this once or twice on a level is fine, as you can work out exactly when you should grab your life, but it doesn’t work out like that as there could be at least 3-4 areas you need to clear just to beat a level and I don’t know about you, but without a progress bar in place, or a number shown, displaying how many more bullies you will need to beat up in order to move on, Squareboy vs Bullies soon gets a touch boring. When playing alone, despite my efforts to feel sympathetic to the titular Squareboy, who at the start of the game gets the living daylights beaten out of him, before waking up in a dojo and having a sensei teach him how to fight, the only time I was ever properly engrossed was when I was playing in handheld mode.

I don’t quite know why I didn’t like the game when playing by myself with my Switch docked, but I just really wasn’t a fan of it. Everything felt like it would take forever to happen and yet in handheld mode, it didn’t feel that way at all, as it felt faster. Although interestingly enough, the second co-op play was triggered, the TV Mode issues ceased and everything felt…better. So I am definitely glad Squareboy vs Bullies for Switch does have that particular exclusive feature, as it does make the Switch version the definitive version of Squareboy vs Bullies: Arena Edition, but Squareboy had the chance to be so much more than what it is now and it just didn’t happen and because of that, I went from being vastly interested to somewhat disappointed after one hour of playing, Still it is a game where you can tell bullies what for and hand their yellow behinds to the,. So I stuck it a little bit longer and while my opinion of it may not have changed all that much, as least I was still taking names and teaching lessons in pain for a good couple of hours which followed.

By no means is Squareboy vs Bullies: Arena Edition one of Ratalaika Games’ finest ports for Nintendo Switch as I would have liked a lot more added to it to fill it out a bit, (especially since it can be a tad dull when playing alone whilst the Switch is docked,) but Ratalaika only handled the porting and Western publishing of the game and not adding more content. Still Squareboy is better than Ratalaika Games’ last Switch offering (36 Fragments of Midnight.) So although it is not perfect, it is cheap, it is simple and if you’re worried it will take up too much of your storage space, it’s only 77 MB, so it’s small as well and it is a sign of better things to come as the next game to come to Switch that has had Ratalaika Games involved with it, is a total knockout, so even if Squareboy isn’t for you, The Count Lucanor might very well be!