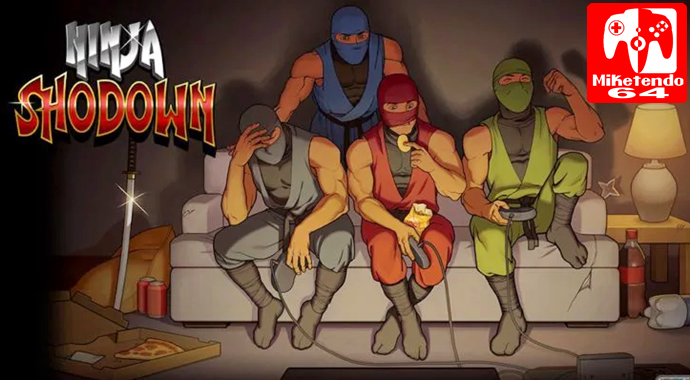 Ninja Showdown is all about being stealthy, Cunning and most importantly being able to dab!

If you can’t dab you will definitely not survive in the intense ninja battles. I say this because whenever you win a battle your ninja will dab. I found this quite funny the first time I saw this and still is quite funny now. If you decide your chosen weapon won’t be your own 2 arms you can always use the chosen ninja weapon the shuriken.

These shurikens can be used multiple times so if you miss your opponent you can always go and collect it. This is useful as you only have a few at your disposal, you can however destroy boxes and hope to find shurikens in them. The other weapon you can use is the trusty katana. This is a close ranged weapon used to get up close and personal with your enemies. The only problem with using this weapon is that it sometimes doesn’t recognise your input, you then will go running straight into anyone in your way.

This is very frustrating as you lose a life anytime you run into them. This is where I think the controls need to be improved as they just aren’t up to scratch. They feel loose and aren’t efficient enough to rely on them. I had to slowly approach enemies, which I personally think defeats the point of being agile like a ninja. Enemies also randomly appear through doors, which is a good surprise but not very good when you are in front of the door. When the evil ninja spawn they will immediately kill you leading to a loss of 1 of your 3 precious lives. The controls are also a little too sensitive when moving across platforms. The ability to double jump has led to some epic comebacks from near death encounters, so I can say that works fine.

The art style is very simplistic and meant to mimic the looks of old retro titles from the 90s. It does look nice but some of the foreground objects look a little rough. For example the brick pillars don’t match the colour scheme of the other parts. This isn’t a big deal but if it’s meant to be a retro callback I would appreciate the same art style across the full game. The stages are well designed leading too some fun fights. They have multiple levels for fun fights, which makes you jump about the full stage. The gameplay is fun when it works and allows for some great ninja confrontations.

The game is at its strongest in local multiplayer where you can team up with up to 4 ninja friends. When you go local multiplayer you can choose your own game mode, zone and level layout. Game modes include: Last Ninja, Battle, Coin and Crown. My favourite mode is the coin mode, you have to collect as many coins as possible. There are also 5 unique zones to pick from. They all look well designed and serve as a great background.

The level layout is interesting as you can choose how big you want it to be. To distinguish yourself between the other ninjas you can choose a different colour costume. There aren’t too many colours but you have your standard primary colours with a few extra ones. In terms of replay-ability you have trophies that you can collect. You gain trophies by collecting so many coins for example or killing x amount of enemies. The audio in the game is really catchy and the sound effects are superb. As for the price £9 I would say it’s about right. The game is really fun all in all but I wish the story was more developed. If it had a prominent storyline the game would feel complete but without a developed story it feels like it’s missing something.

Overall Ninja Showdown is primarily a game best payed with people and not alone. The controls are wonky and could limit the amount of enjoyment you will get out of it. It does have a great retro sound track and lots of dabbing ninjas. If this sounds like a game you will enjoy I would definitely say it will be an excellent purchase. But if not, it’s a hard buy with the ever-growing amount of Nindies appearing on Switch.