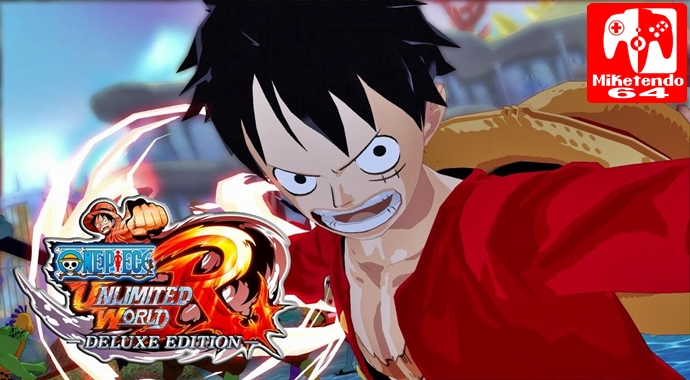 For the players who did not go out of their way to buy a SNES mini today, but still have cash burning away in their pockets, there are two large games worth your consideration and since we’re not reviewing FIFA 18 today (that review comes later,) let’s talk about One Piece: Unlimited World Red – Deluxe Edition!

While One Piece may not be anything new as it is a game that has made an appearance on a whole range of platforms, including both the Nintendo Wii U and the Nintendo 3DS, which it was actually first released on back in 2013 for Japan, at lease the Switch version does come with enhanced graphics and all the DLC! So if you purchase it from the eShop, one single payment and download is all you’ll need to do to get the entire game straight on your Switch!

So right away, One Piece: Unlimited World Red – Deluxe Edition is off to a good start, a very good start if you consider the fact that local co-op is supported, (not a new feature by the way,) be it Story Mode or Battle Coliseum, your One Piece adventure does not have to be a lonely one as a friend, a lover, or a sibling can be there with you every step of the way and somewhat insane journey, but before we carry on down that path, let’s first address just what the heck is One Piece. Well One Piece: Unlimited World Red – Deluxe Edition is a licenced video game based on the hit Japanese manga written and illustrated by Eiichiro Oda.

One Piece first made its debut back in 1997 and covers the adventures of one Monkey D. Luffy, a boy whose insatiable appetite lead him to eating a Devil Fruit, which resulted in his body gaining the properties of rubber. Still, just because he is the main protagonist, as with any story, there are those who accompany the protagonist and for pirate Luffy, his companions are the Straw Hat Pirates and together they’re exploring the Grand Line in the hopes of discovering a lost and ultimate treasure, which is known as “One Piece.” But why seek such a prize? Well for one, it will allow whoever has it to become the next Pirate King and with Luffy being the pirate that he is, of course he desires such title!

Now its premise may not mean all that to a few of you reading this, but One Piece is so popular that it is the best-selling manga series to date, having sold over 416 million copies and because of that popularity, more than 30 One Piece video games have been made, more than 10 animated movies and yes, it’s had animated TV series as well. So long story short, One Piece: Unlimited World Red – Deluxe Edition is a big deal and while One Piece: Unlimited World Red wasn’t as high praised as it could have been back in the day, it is now on a console where the players can appreciate it even more. Granted it is a better port, with no real features as such that is still no reason to shame it as One Piece: Unlimited World Red – Deluxe Edition is a role-playing game of sorts that does also double as a decent brawler.

When first booting One Piece: Unlimited World Red – Deluxe Edition up, instead of diving headfirst into the main story, I actually decided to start with the Battle Coliseum and swiftly lost five hours of my life. I’m not saying I regretted the 5 hours of constant fighting and battles, I’m just saying the Battle Coliseum mode can be pretty big in its own right and although it can feel something of a standalone addition at times due to the way it’s played, handled and has its own story. But it is not a standalone affair as there are plenty of rewards that can be won via your efforts in the ring against Bosses, winning duels and undergoing scrambles, as in addition to unlocking a whole load of fighters, with more becoming available the more you advance in the rankings, there’s also content for the main game in the form of extra quests. Yes there are items that can be unlocked as well, but there are Quests and lots of them and they can all be accessed from the inn.

But just to properly convey how large the Coliseum mode is, after the first 5 hours of constant gameplay, I only managed to accomplish 47.2% of all available rewards and still just managed to be eligible to compete in the Promotion match to enter the A League, after having lost it the last time round and having to start all over again from C League. (This is actually a set event, so when you are in the same boat, you too will lose and start over again.) As for things you can actually expect to do in it, there is a Boss Rush battle, which requires you to beat 5 levels packed with bosses (essentially the fighters you can play as and unlock,) as some will consist of 2 bosses working together.

Simple 1-on-1 duels, Special Matches where you are required to play as a certain character and even modes like Scramble, which does have various difficulties (Easy, Normal and Hard.) Still there’s more, as there is also Battle Royale and Scramble and while some may seem a bit dull compared to others due to the scale of them and the little number of stages there really are, the Coliseum mode is still a great way to get a feel for all characters One Piece: Unlimited World Red – Deluxe Edition and try out their unusual combos. After all, while Luffy can extend his limbs, not every fighter can, so they each have their own way of handling themselves in battle. For Robin it’s using hands and arms that come out of the ground. For Nami it’s her staff and weather controlling abilities and for Hancock, it’s hearts and her charm.

By no means is every character great to play as, but thanks to a really god teammate AI in effect, even the harder to play as characters can make for a could COM controlled ally on some stages, just try not to die, because when you do, you will have to play as them and although I would like to talk about the Battle Coliseum even more so than I have, I think it’s only fair to give the actual main story the same treatment, so  it’s time to touch on what it does right, what it does wrong and things you can do in general.

Firstly, it has an original story of its own that is very One Piece in the sense that there is some hilarity, there are some plot-twists and a whole lot of other One Piece-like shenanigans, even though the story is about the crew of the Thousand Sunny (the Straw Hat Pirates) who come ashore of the “The Island of Promises,” as it is original character Pato’s desired destination. Only in the space of 5-10 gameplay minutes, everything goes from being okay to horribly wrong as all of Luffy’s crewmates have been kidnapped and in his efforts to get them back, he’ll find himself visiting places he’s been before and fighting notorious characters from previous games, the series and the actual manga.

Now like I said, the story is very One Piece and being an Unlimited game, it is quite like previous Ultimate games, and is portrayed as being an animation being brought to life thanks to its visual anaesthetic it has and the accompanying soundtrack. It’s also pretty cool how Trans Town is used as a hub world for the game as it literally becomes a town of your own making as Luffy becomes responsible for restoring it and helping it go via the placement of pharmacies and more, but it’s a shame the levels and bad guys are just not as good as they could have been. While the backgrounds on certain stages can be immensely impressive, the actual layout themselves can be a little too repetitive to the layout to the earlier stages of the game. What makes it worse though is exploring areas you’ve previously visited is something you’ll be doing a lot of as there are some areas that can only be accessed via certain characters because of their skills and some quests demands you backtracking, so it would have been nice if each stage was a bit more original or just different to the last one, but it is what it is and there is no changing it now.

Personally, the above issue isn’t that too severe, as I can take it or leave it, but my Player 2 really didn’t like it, but I think the AI for companions is a little too good as computer controlled allies can and will often easily dispatch of those easy to forget foes, but hey, each stage has a Boss and the Boss battles are always exceptional thanks to dazzling combos and introductions that you know mean business! In fact the whole set-up would have been perfect, if everyone playing the game was a lifelong fan. The majority of the time, One Piece assumes you know the ins and outs of the series and when it doesn’t it gives you an occasional reference to help you out, but this is something of an oversight if Bandai Namco was hoping to create new fans thanks to the Switch release.

Still just because there is plenty of repetitiveness, terrible camera angles at times and an odd Strong Word system that doesn’t really make that much of a difference, One Piece does deliver on great and easy to master action. Fun to do Special attacks. Intense cut-scenes and a large enough world for players to enjoy on end, so although there are a range of negatives at play, I do feel as though One Piece: Unlimited World Red – Deluxe Edition is a game that does merit checking out. It is fun, it’s downright bizarre, some of the female characters really need to wear better clothing items, but it does come across as being a game that was meant for Switch despite previously releasing everywhere else. Plus for the sake of repeating myself, local co-op play is supported, so at any time a Player 2 can drop in and drop out at the press of the button and One Piece can be played with just the one Joy-Con controller, so if you’re after a multiplayer game you can buy Day 1 when you get a Switch if you haven’t got one already, One Piece is as good as any.