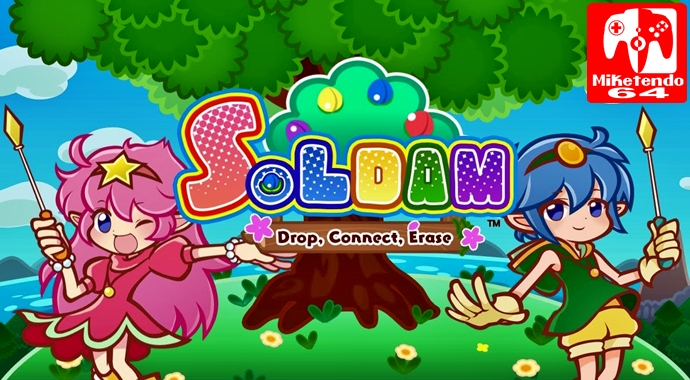 September 21, 2017 4:08 am Published by themancalledscott Leave your thoughts

The falling block puzzle game is one of gaming’s most reliable genres. Though they tend to be simple on the surface, the gameplay of the genre that Tetris built tends to be deeper and more complex than it at first appears, making for immense replay value and pure, unadulterated gaming fun.

One of the more popular falling block puzzlers of the early 90s was the arcade title Soldam, which has found its way onto the Nintendo Switch with updated graphics while still maintaining its classic charm. Though Soldam (now boasting the subtitle of “Drop, Connect, Erase”) may not be one of the best block puzzlers out there, its simple twist on the genre is another reminder why these types of games will always be fun.

The basic premise of Soldam is the same as any other title in the genre: blocks fall from the top of the screen, and threaten to fill up every last space. You need to match up the blocks by their respective colors to eliminate them. The more you manage to eliminate, the higher your score. But should the blocks make it to the top of the screen, its game over. Soldam comes with a twist, however. Instead of falling blocks, it’s fruit that falls down from the heavens (called “Soldam fruit,” in case you were wondering where the strange title comes from). The fruit always comes in groups of four, thus still technically making a block. You can rotate each quartet of fruit in order to match the colored fruits up with other fruits of their corresponding color, with an entire row needing to be made the same color in order to eliminate it.

There’s another major twist in the usual puzzle gameplay in the form of “flanking,” which ends up being Soldam’s biggest draw. You see, even if you run into a tight spot and need to place mismatched colors in an otherwise consistent row, you can still rectify it by placing the proper color on top of (or to the side of, or diagonally from) the misplaced color, which will then “flank” the misplaced color, and change it to the desired color.

Of course, you’ll have to be extra careful as the game goes on, because if you make too many mistakes, it will be all the more difficult to try and flank them. And as a match goes on, additional colors will be added (you start with only two). And you can only flank through one color. If a blue fruit gets in the way of the yellow, the red fruit can’t flank through it.

It’s a really simple concept, but it proves to be a lot of fun the more you play it. It may not turn the genre on its head like Tetris Attack or Tetris Battle Gaiden, but Soldam is nonetheless addicting and mentally stimulating, as any self-respecting puzzle game should be.

On the downside of things, Soldam doesn’t boast a whole lot of variety. Along with the traditional mode of trying to get a high score, there’s also an “endless mode,” two-player versus matches, and challenge mode, which puts you into a series of quick objectives (eliminate so many rows within a set number of turns, destroy several rows at the same time, etc.). There’s definitely fun to be had here, but none of the additional modes add a whole lot to the experience.

Soldam may not rank as one of the best falling block titles I’ve played, but its simple mechanic of flanking proves to be a very engaging concept, and the game is complimented by cute visuals and characters, as well as a catchy soundtrack. Soldam may not be the perfect puzzler, but it makes for a fine addition to any collection for fans of the genre.