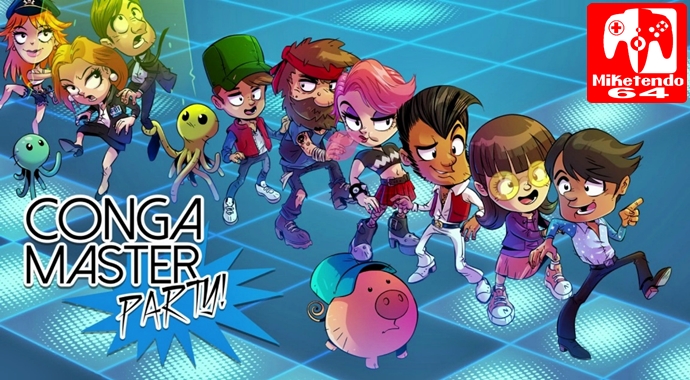 While the unusual, but brilliant Conga Master Party won’t be making its Switch debut until next week, it is currently playable at TGS 2017 and it is getting the attention it deserves:

(Indie pixel party-game Conga Master selected as one of just eight finalists for coveted award, is playable on the show floor at booth number 9-A61.)

Thursday 21 September 2017 – Videogame publisher Rising Star Games, on behalf of development studio Undercoders, is delighted to announce that the multiplayer party arcade game Conga Master has been shortlisted for the ‘Sense of Wonder Night’ event at Tokyo Game Show 2017. The game will also be playable on the show floor at booth number 9-A61. Media attending Tokyo Game Show 2017 are invited to play the game and to come visit and talk with the developers at the booth.

Conga Master is being considered as one of just eight finalists of the Sense of Wonder Night event, which awards the most experimental, creative and unconventional games of the show. The judging panel is formed by a group of indie developer experts and creators from several countries. More information can be found on the official Tokyo Game Show 2017 website, here.

The Sense of Wonder Night event will be streamed live on Friday, 22 September at 17:30 – 19:30 (local Tokyo time). The presentation is conducted simultaneously in Japanese and English. “We’re super-excited that Conga Master has been selected as one of the finalists of the Sense of Wonder Night of the Tokyo Game Show, among so many awesome indie games,” said David Jaumandreu, CEO of Undercoders. “For us, attending the event is a huge honour and a great opportunity to share details of the game’s design and development, as well as to meet up with and receive valuable feedback from so many indie game experts.”