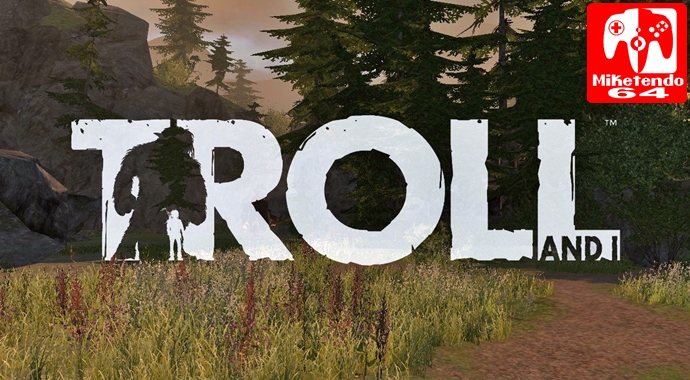 [Review] Troll and I (Nintendo Switch)

When Troll and I was first revealed for Nintendo Switch, I was excited and then I remembered how it did how badly people took to it when it released earlier this year back in March and now that it’s finally here, sadly it’s nothing worth writing home about.

I so wanted to enjoy Troll and I and there were a few moments I really did, like within the first 10 minutes when I was really immersed with the game and the setting it was trying to sell me, but it just went so bad, so fast and now here I sit, writing what is now one of the hardest review I will ever have to write, but before I say what I have to say about Troll and I, there is one thing I do have to say. I have seen some of the reviews Troll and I got, particularly one by Destructiod and while the game may have its faults, I would never write about this new release in the way Destructoid reviewer Patrick Hancock wrote about it. (Click here to see his atrocity.)

If you are reading this Patrick you should be ashamed of yourself. By all means speak your mind and voice your opinion, but as a writer, you should know there are more plenty of other words and terms you could have used, instead of using the same one over and over. Bad game or not, did you even try to review it? But I’m getting off topic, so I’m going to direct this review back to what I think of Troll and I and before I write about what goes on in the game, first I need to write about how it plays. Or to say it more bluntly, how badly it plays.

By now I’m sure you’ve all heard about the “game ending glitch” discovered by Nintendo Life? Well here’s the rub, I’ve had the game for nearly a week and have had to start over three times and yet, I never encountered that issue once, but I did experience plenty of over issues instead. For instance, when encountering loading screens, prior to a “fix” I myself did, the loading screens never ended. I once waited a full two hours to see if the game would suddenly kick in, but it didn’t. So I’d have to press the Home menu button, close the software and load the game up a game and resume playing from where Troll and I last autosaved, but when everything is loading, half the screen would disappear entirely, especially when engaging in a bit of co-op play, plus there’s plenty of frame-rate issues.

The worst glitch however I encountered, which was plenty in itself, was with the climbing. Normally for Otto to climb, he would need to use the little outcroppings and ridges to scale a cliff-face, only for me he never did (until I fixed it.) I would be tasked with climbing up a certain ledge, but no matter how many times I tried to climb it, Otto would never use the ledges and follow the correct path and sometimes I couldn’t even climb at all, because Otto would suddenly fall and although he was directly above the group, he would remain in the falling animation, When playing in co-op and this happens, every time I would try to “leave co-op,” the software would immediately force itself to close.

Well, after the umpteenth time of finding myself stuck because Troll and I was doing its best to stop me from proceeding, I took to various means in the hopes of sorting Troll and I up. I tried hitting the Home menu and turning my Switch off by holding the Power button. I tried deleting the game altogether and downloaded it again from the eShop and starting a new game, but still nothing worked, so I went a little out of the box. I went into settings and I changed my Switch’s region and guess what, the game stopped bugging out on me. I don’t know why it works, but it does and it’s only temporary. After a couple of hours, the glitches would return, framerate will drop and I’d need to change the region again, but as soon as I returned it to the region I had originally, the game would become immediately worse when playing it.

Granted changing the region again would temporarily fix the digital version of Troll and I, I received, but it’s a hassle going through such a thing over and over that you soon find yourself debating as to whether or not you should continue, but I did continue and now that I have said what I needed to, it is time I actually start talking about the game itself, so here’s me doing that, Developed by Spiral Tower and originally planned to be published by Square Enix, only to then be revealed to be published by Maximum Games, Troll and I is the story of Otto and a Troll named Troll. (It’s not very creative I know, given what is wrong with the game, it would be foolish to focus on Troll’s unimaginative name choice.)

The pair aren’t childhood friends or anything like that, but they are in a way kindred spirits as they are two lost boys running amok in a forest after devastation arrives. For Otto the devastation is the destruction of his village, causing him to be separated by his mother and for Troll, the devastation is a hunting expedition from the UK who have been sent to track down Big Foot and bring it back alive. Only as part of their efforts (a whole lot of explosives,) holes begin appearing in the ground, in which monsters crawl out of and begin attacking everyone they encounter. But don’t worry it is okay, because it’s not too far into the game before Otto and Troll find each other and begin to uncover the mystery of everything that is going on in the game’s Scandinavian setting and while Otto’s attacks may prove feeble against those he encounters, Troll’s attacks are far more devastating.

It goes without saying, Troll has the upper hand in a lot of aspects, but this is a game about teamwork, so while Troll is good in a fight, there are times where Otto needs to battle a horde of enemies on his own, but at least he can do so with a varied arsenal. It sucks he can’t pick up the swords and guns dropped used by those you encounter, but with materials and items that can be acquired all through-out Troll and I, Otto can craft a range of hard hitting weapons and spears that when thrown, can cause devastating damage, especially when they are the explosive kind.

In addition to the fighting, which there is a lot of, there is also a lot of going separate ways so Otto can dismantle Troll traps that can kill Troll instantly, there’s puzzle solving and foraging and if you’ve you’re not a vegetarian, you can always eat the meat of a boar you hunt down in-game. (Warning, Otto does “cut up” the boar and there is a hole left in the recently deceased animal that allows you to see a couple of bones and guts.) There’s also a lot of puzzles which can either be frustrating or a little too easy. And then there are some that are just a little too complicated than they have to be, By this I mean, all you have to do is go to a certain location and find something like a dead body and retrieve a key from it, but even with the game’s map that came with the Switch version, but added to other versions via an update, the map isn’t as clear as it could have been with the objective markers at times, so you find yourself spending more time having to figure out where exactly it is you need to go and how to get there, as opposed to the amount of time you’ll spend doing when you’re there.

Also as far as the exploration of the game goes, you will need to be very observant as there are discoverable Idols found all over the map, which are used to upgrade abilities and stats for both Troll and Otto, whom when playing on your own, can be played alternately, but when playing co-op mode, the screen will be split and each player will play as each character and I’ve got to say, Troll and I is a lot better when playing with someone else as you can then work together and do stuff at the same time as opposed to making one character do one thing and then swapping to the other to do something else. Only thing is, co-op mode proved to glitch more and my Player 2 isn’t as forgiving and tolerable as I am, so she soon got bored of gritting her teeth and playing through it, so I soldiered on without her.

Good news is though, the graphics really aren’t as bad as some reviewers are trying to make them out to bet. Yes they aren’t the best in the world, but they are decent and the cut-scenes are pretty good at times, but the thing that Troll and I does best, is the relationship between Otto and Troll. By no means are they anything like a buddy movie as all the banter is one sided and Otto sounds like he wants to be a character in the TV show Vikings, if that character’s voice was devoid of all emotion, but I liked seeing how they were together and how they interacted. It was actually the relationship between them that kept me playing, as I wanted to see more of it, but they’re no Banjo and Kazooie and now that I feel I have said almost everything I possibly can about this game, it’s time for my final word.

If there was any game I would flat out not recommend to someone, than Troll and I is that game. There was a reason why it was so poorly received the first time around and despite efforts to improve upon it, Troll and I is not good port whatsoever. Given how bug ridden it is, it’s a wonder how it passed QA, and it’s a shame Troll and I is bad, because I really wanted it to be good. I wanted the Switch version to be the version that redeemed itself, but despite all the gimmicks and mechanics the game had going for it, the bugs are just too much. Some games on Switch cost a little more than they’re worth and in Troll and I’s current state, it’s not Worthing the asking price, but it could be, if efforts are made to fix it, but that won’t be for a long time, if at all.