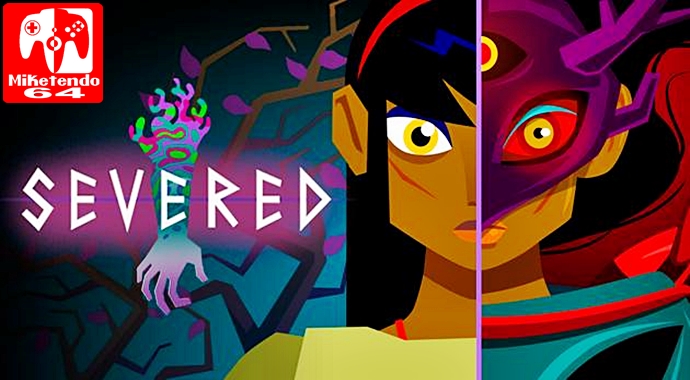 It’s not every day you get to revisit and review a game you previously reviewed for another platform, but it does seem to be something that is happening more often and this time the game being revisited, is none other than Severed!

Developed by the Toronto based DrinkBox Studios, (best known for Guacamole), Severed first made its debut on a Nintendo platform, when it released on both Nintendo Wii U and Nintendo 3DS in September, 2016. It was for both platforms I reviewed the game for, back when I was doing the Jacktendo Reviews, only now that it is on Switch, it is time to see how much Severed has evolved and the answer is, it hasn’t. 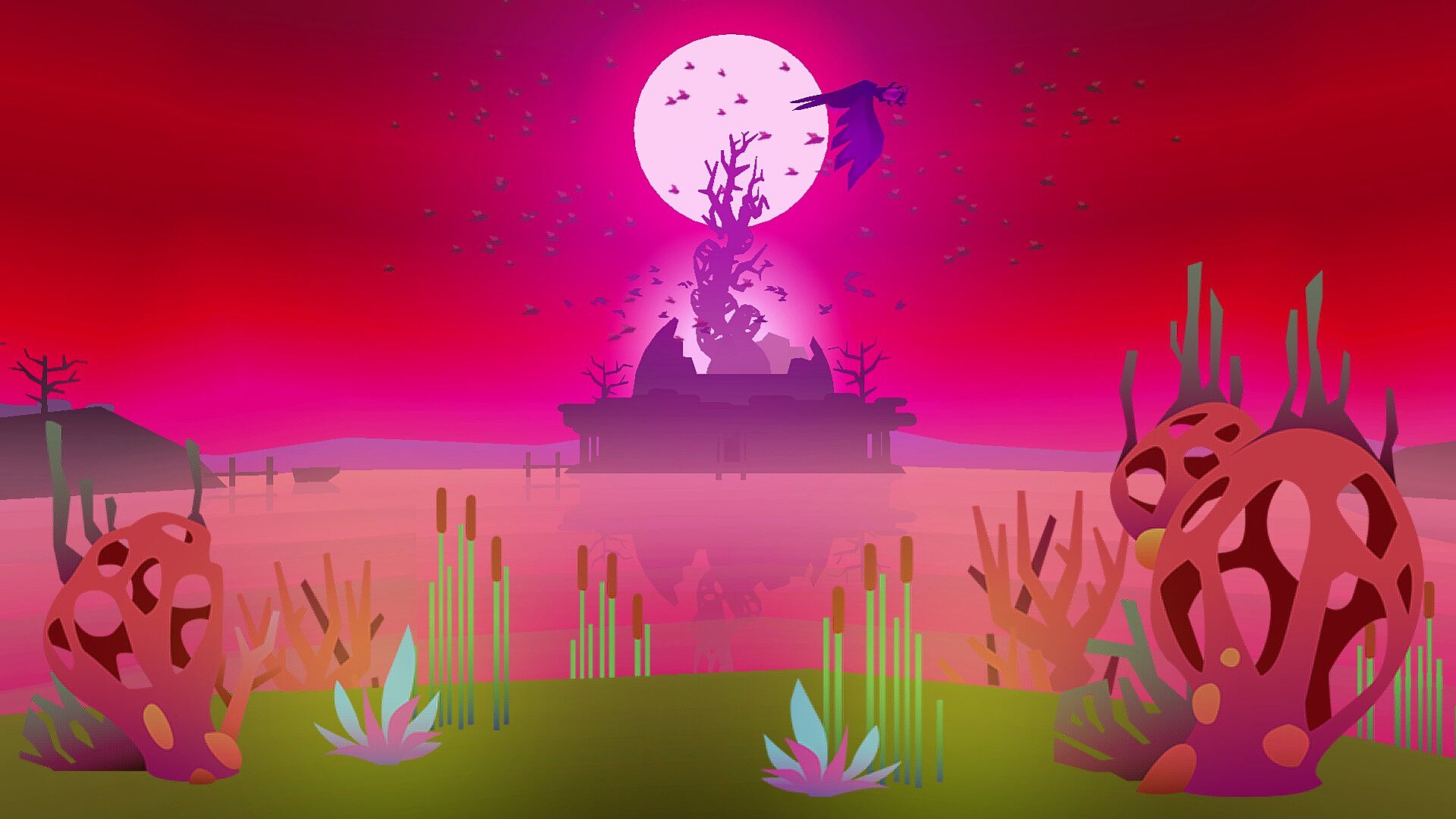 Do not for one second misconstrued what I said above, Severed is a good game and I do not mean to say a bad thing about it, but if you’re hoping the Switch version has extra content or handles and looks better than previous incarnations, then it’s time to dash those hopes. Other than the fact that when you dock your Switch and the TV screen tells you it can only be played in Handheld mode, there is nothing Switch specific about Severed, as it really is just a straight up port.

Still, simple port or not, Severed is still a good game and if you never got round to experiencing it last year, now is just as good a time as any to give it a try and while when I last wrote about Severed, there was nothing I didn’t cover, here’s me taking what I wrote before and molding it into something a little newer for 2017.

So what is the story to Severed and just who is its protagonist? Well taking center stage in this vividly grotesque, yet beautiful world, is Sasha a one armed girl, who once upon a time, was taught how to fight with a sword by her warrior of a mother. The game begins with her waking up in a zany and oh so strange word, where despite a certain attractiveness it has to it, there is also an eerie sense of foreboding darkness.

Taking in her surroundings, her family is nowhere to be seen, so she walks towards her family abode, only to have everything she every knew to be real and believe in, spiral out of the nearest window as she is confronted with a peculiar and all-knowing being. A being who sees her armed with a living sword, tells her what is what and gives her a purpose and that purpose is to recover her family and see them brought back to the place they once called home.

Now I wouldn’t say Severed has a terrible story, as it does become an intriguing experience, but having played it now on three different platforms and giving it three chances to wow me, it still doesn’t do anything for me, but while the story may have failed me, it doesn’t mean it will be the same as you. But I just keep finding it really hard to be wowed by it, when the story is spoon-fed to you in between multiple and very repetitive battles. Plus it is all too easy to skip a vital piece of dialogue, by pressing the screen or button at the wrong time.

Fortunately, while the story may not have been to my liking as much as I wished it would have been, the soundtrack is just as good as ever, but it is still hit and miss, as while some scenes it catches the tone perfectly, there were plenty of scenes where the soundtrack felt a bit too much, or not enough. Regardless though, the music is still better than the combat system at play, which even on Switch and without a stylus, I find to be too easy. To fight, all you need to do is swipe the screen at your enemy in the right direction, do a long swipe to deal more damage and swipe at the right time to counter.

In fact for anyone used to playing touch-screen games and swiping in general, the combat for Severed will be a doddle, as even when playing through Severed on its hardest setting, gamers used to using their fingers will find enemies offering them little to no threat at all. So while it seems easy for them, the fact is, you only really need to fight each monster twice, to get a feel for them in terms of how they attack, how long it takes before they attack and how they move, before you the none finger swiper gamer can kick their butts with ease as well. One consolation to this though, is while the battles against lesser enemies are just way too repetitive, at least the boss battles do mix it up with a little panache. But there’s not many boss battles and there’s a gauge (or more when facing multiple enemies,) at the bottom of the screen, which lets you know when a monster is going to attack next, which does away with the element of surprise.

Still, at least there is some variety to the enemies you face, in the form of tougher forms who require a little more effort to beat them, until you’ve acquired the ability to steal an enemy’s buff (or buffs if you’ve been upgrading your skills tree.) Once such a trick is yours, even the toughest of foes is tough no more, which again makes Severed feel like a walk in the park. But hey, if you want to make the game harder for yourself, choose its most difficult setting and when playing through it, limit yourself as to how many times you use the skills tree to learn new skills and level them up (which is done via using monster parts, you acquiring by severing your foes, when filling your focus gauge during each and every battle.) Also be sure to not pick up Heart and Brain pieces, so as not to extend your life and mana gauge.

Or to make the game even easier, ignore most of what I just said in the paragraph above, charge head first into battle every time and do your best to fill your focus bar so that way when you have dealt ample damage to each enemy, you can then sever their limbs and wings from their body and put them to use by upgrading your skills and the like, as you can easily make yourself an overpowered warriors well within the first two hours of playing through the game. Oh and make sure you collect the Heat and Brain pieces, as they’ll greatly help.

However there is more to Severed than just repetitive battles and collecting body parts as there is a map on the top right corner of the screen, which when pressed, will expand. There’s achievements and there’s a whole lot of exploration. By no means is Severed as large as The Legend of Zelda: Breath of the Wild, but it does have plenty of areas to explore, secrets to uncover and puzzles to solve that can easily take you 7 hours of playing, just to see, do and find everything, which is good.

The world Severed is set in and some of the characters you see it in, is what make Severed such a great piece of work, so if you do choice to play it, brace yourself for there is a whole lot of a twisted dimension begging to be seen, but there’s not enough of it. Not in my book anyway. I said it before and I’ll say it again, I love the world Sasha’s adventure takes part in and would love to see it appear in another game, but until such a thing actually happens, I guess I’ll just play Severed over and over again, because even though it is not a game that really appeals to me, it is something I find myself going back to, over and over and in a weird roundabout way, I’m kind of chuffed about that and because I’ve prattled on too long, I think it’s time for the final word, don’t you?

Being just a port that is limited to only being played in Handheld mode, it’s hard for me to just state that Severed on Switch is the best possible version when it’s not. Out of the Wii U, Switch and 3DS versions, the Wii U one is actually the best platform to play Severed on, but that does not mean it is not enjoyable on Switch because it is. It feels smooth, it’s a game with world worth looking at and getting yourself lost, in but despite everything it has going for it, I feel the Switch version could have been more than it actually was, but it is still a good game to have on your Switch regardless, so if you feel like adding a DrinkBox Studios title to your collection, than that is exactly what you should do!