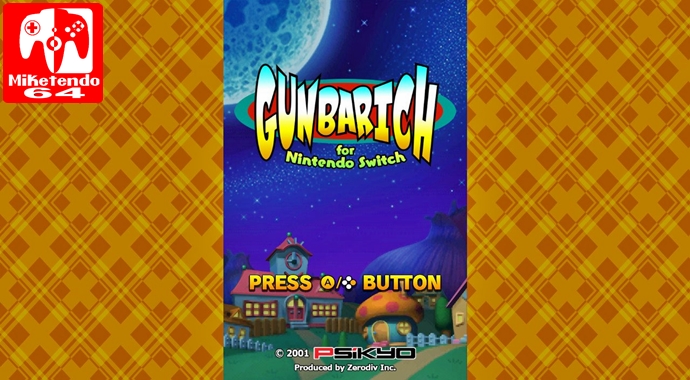 Guess what guys? After reviewing one of the recently released Zerodiv games this week, I’m going to be reviewing another one and this time around, I’m talking Gunbarich!

Just like the case with Strikers 1945, Gunbarich is another arcade recently brought to Switch that was initially developed by Psikyo and published by Zerodiv Inc. Unlike Strikers 1945 though, Gunbarich is not a game first born in the 90’s as it made its first appearance in 2001 and while there are some who wished Gunbarich remained in 2001, there are those who are glad to see it make a return as it did go on to be a bit of a popular game in Japan.

Only now, thanks to a global release on Switch, anyone all over the world can enjoy it, but it is a game that can be enjoyed? Honestly, it depends entirely on you. Gunbarich is not a game everyone will enjoy, as it is essentially a block-breaking game, with some shooter and pinball elements to it, so while it promises a mildly interesting mix-up, there’s not enough pinball and shooter elements to allow this anime styled creation stand out like it should!

The good news is, gameplay and the controls aren’t as bad as you might imagine them to be. A is used to enter and use your flippers. B is for back, with + being able to open the option menu, with the left analog stick being used to move the cursor and move the player, of which there are two to choose from when starting a new game. For those of you who wish to play as a boy, you can pick Grutan, or you can pick Marion to play as a female, who is the very same Marion from the Gunbird games.

Once a character is chosen it is time for various lessons in magic that will eventually lead to becoming a great magician, should you live long enough to conquer the 7 worlds and you won’t. Not at first anyway. While Gunbarich is essentially a very simple game where you just need to hit a pink ball repetitively and break all of the bricks within the one minute time limit to reach the next level, while lots of monsters and hazards stand in your way.

Hazards such as walls that move and switches that can be turned on and off by hitting them, causing blocks to appear. Then there’s monsters that can shoot bullets at you, but its okay because you can use your flippers to repel them. Failing to do so can have them shock you, paralyzing you in place, until you break free be moving the left analog stick. But even if you survive all that and are able to stop the pink ball from falling beneath you, upon reaching the third level of every world, a boss battle awaits you and if you’re not careful, you will lose lives rather quickly. The good news however, is if you lose all three lives, you can of course choose to continue, at the risk of losing all the points you earn, but even then the continues are limited, unless altered.

For the players who can’t beat Gunbarich, in the settings menu it is possible to give yourself 9 lives and set continues to unlimited, but if that makes the game far too easy for you as you can now easily keep going until you eventually win, you can also set continues to 99, or a much lower number like, 3. However if the shoe is on the other foot and Gunbarich is too easy for you, you can of course reduce the number of lives you have and lower the continues, so if you want a challenge, you can tailor make your own one and that is fun as it will force you to do better when playing and strive to collect the extra lives when they appear, as well as the other power-ups/items such as Hyper, Wide, Multi, Great Magic and Speed Down.

Now as much as I would like to write something else about Gunbarich, there isn’t actually much more I can write about it, except for the fact it is a game that will save your score when finished and can easily be completed within an hour (depending on how many lives and continues you give yourself, or how skilled you are,) but other than that, that’s everything. Gunbarich is by no means a large game and with me here with nothing else to say about it, it’s time for the conclusion and final score!

Armed with nice visuals and tunage than that of Strikers 1945, Gunbarich isn’t a bad game and does stay true to its original incarnation, but while it is rather decent and maybe just worth its asking price, I certainly think Strikers 1945 has the edge on it. I like Gunbarich, it’s really not that bad, but if I had to choose between it and Strikers 1945, I would pick the latter 99% of the time, but that’s probably because I like to shoot things in videogames (I have been playing a lot of Splatoon 2 lately.) Regardless of how I may feel about it though, if you’re looking for some pinball-like action on Switch, it is here and its name is Gunbarich, only you will have to excuse the poor English grammar as there are plenty of typos and mistakes, but not enough to ruin Gunbarich outright.