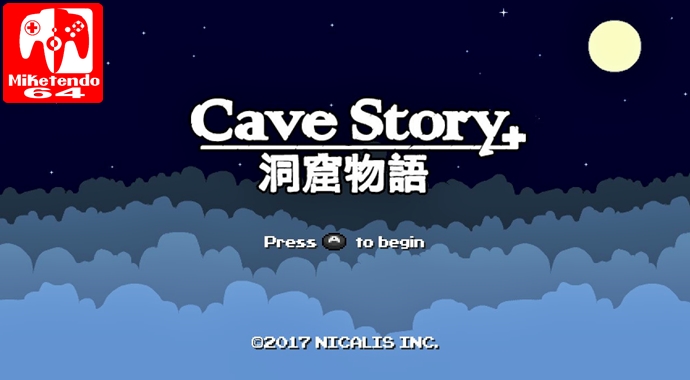 With the Nintendo Switch being the new Nintendo console on the scene, it is understandable that anyone who has developed or published an indie game would like to bring it the Switch if possible and while many have done so already, not every one of them has done it to the scale Nicalis are doing it!

Not only are they bringing a whole array of titles to Switch for this year and 2018, but they’re also doing a physical release for every single one of them and while the physical release of Cave Story+ has yet to happen, it is available now digitally and it is most definitely worth checking out.

Originally released back in 2004, Cave Story was the Metroidvania game that appealed to fans of the platform-adventure. A game that was so good that it would on remain on PC, as it would find itself coming to a whole array of other platforms in the years that followed, which includes the likes of the Wii, Nintendo DSi, Nintendo 3DS and now the Nintendo Switch. Still it wasn’t just the original version that made its way to the newer consoles as Cave Story was rebranded as Cave Story+ and Cave Story 3D for 3DS.

So being as though it is a game that has been around the block many times, just how does the Switch version differ to the others? Well, being the latest version to release, it features all of the good content the game has got over the years (Jukebox and the remastered graphics from the WiiWare version,) but the Switch version has also received a few graphical tweaks and a couple of “bonus stages” that were “never seen before.” But if that’s not enough for you, soon it will actually see the addition of co-op play, which will also be an exclusive feature just for Switch.

As for another update that is on the way to release next month, is the option to change Cave Story+’s graphics to those used for the original game, for the purists who need their does of 2D heaven, but then that is content that is neither here nor now, so let’s focus on what Cave Story+ on Switch does have and where better to begin than its story?

Cave Story+ is pretty much a game that lives up to its name, a game that has a story set in a cave, but don’t write it off just yet, because this story is the tale of a hero named Quote, with no memory of who he really is, stuck on a floating island he will soon find himself trying to protect as an megalomaniac villain named “The Doctor,” threatens its very safety as he wishes to use the Red Flowers to turn the peaceful Mimigas inhabitants and use them as an arm to take over the surface world. There is of course a little more to the story, but even though Cave Story+ is an old game, I would rather avoid spoiler altogether. What I will say though is while Cave Story+ is a rather cool game you can blitz through in a couple of hours (depending on what kind of a difficulty you choose,) be prepared to play through it more than once as there are many different endings to experience, but the levels are wonderfully designed so re-experiencing them more than once won’t be an issue. Plus with plenty of save spots to go around, even if you only have 10 minutes to play, you can certainly make some headway.

As for how you play, the controls are simple and very easy to use. X allows you to access the equipment screen, A is used for jumping and B is your go to button to fire any and all weapon you collect throughout the game. But since you can only use one weapon at a time, while you can of course go to the equipment screen to change your current loadout, you can easily just scroll through them with the R and L buttons, but if you need more than just a campaign mode that comes with weapons that can level up and down, and life that can be expanded by Life Capsules, there is also a challenge mode that will test your skills to complete it in the fastest possible time. A time that will then be uploaded to the leaderboards for other players to try to best.

Last but not least, the Jukebox is still present and each of the game’s tracks can be played in 4 different ways and while it’s nothing new, it’s the little things like this that goes down well with the fans and helps compliment the delightful package that is Cave Story+ for Nintendo Switch.

Depending on who you talk to, Cave Story+ is one of the games you simply must play if you consider yourself to be a true gamer and the Switch version is no exception. Sure it costs more, and is pretty much the same as seen on other consoles, but it is the version you can literally take with you anywhere that will soon become the definitive version just as soon as the co-op patch comes along, so even if you don’t buy it now, you will be buying it later on this Summer because Cave Story+ really is that good and has aged wonderfully well!