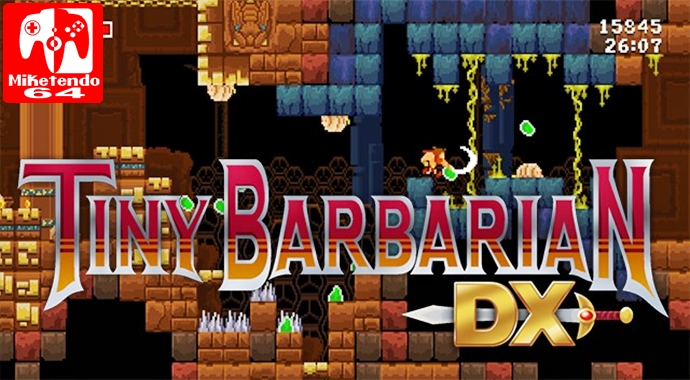 SANTA ANA, Calif., July 19, 2017 — Nicalis, Inc. announced today that physical copies of Tiny Barbarian DX, the company’s upcoming sword-and-sorcery platform game for Nintendo Switch, will feature a dynamic cover illustration by world-renowned artist and character designer Susumu Matsushita. The game is currently scheduled for release in the fourth quarter of 2017 with an MSRP of $29.99.

Mr. Matsushita is best known as the legendary artist who created cover art for hundreds of issues of Famitsu, Japan’s longest-running and most highly respected video game magazine. He is the creator of Necky the Fox, Famitsu’s mascot who appeared as a playable character in Nintendo’s Super Mario Maker via the Mario Costume mechanic.

Tiny Barbarian DX is an action-packed side-scroller that combines platform jumping with sword swinging, expertly blended with retro pixel art and loincloth-stirring chiptunes. After seeing gameplay footage and studying the production art created by StarQuail Games, Mr. Matsushita agreed that his immediately recognizable character rendering style would be perfect for the game’s box art. “Tiny Barbarian DX is a game I’d like to play,” he says, “and it’s been a while since I felt that!”

In addition to magazine covers, Mr. Matsushita’s acclaimed artwork has graced the packaging of many other video games over the past 40 years, including Motor Toon Grand Prix, Maximo and even the original Hudson’s Adventure Island for the NES and TurboGrafx-16. His Tiny Barbarian DX illustration shows the Tiny Barbarian and his counterpart Tiny Barbarina riding on the fearless Wasteland Wildcat while enemies from the game surround them on all sides!

Retail copies of Tiny Barbarian DX will also contain a full-color instruction manual that includes a featurette on the making of the box art. It describes Mr. Matsushita’s creative process, details his preferred art supplies, shows photos of him working at his drawing table and even identifies the 1960s rock instrumental that he listened to while he created the cover!

Developed by StarQuail Games and published by Nicalis, Tiny Barbarian DX is planned for release on Nintendo Switch in the fourth quarter of 2017.