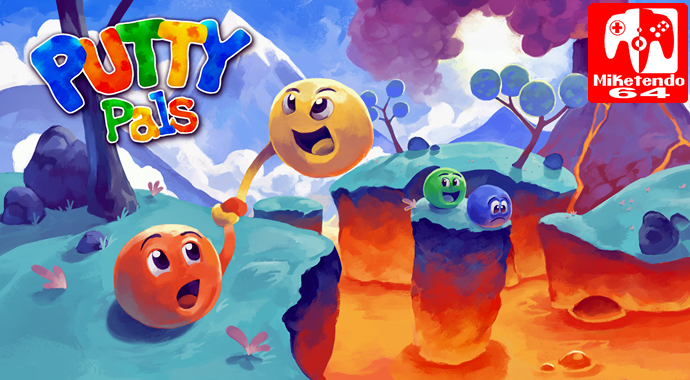 Once again another game has been confirmed for Switch and this time around it’s the rather colourful Putty Pals and first impressions alone, it is an Indie must have!

“That good huh?” Yeah I would say so, and by the time I’m done with this post, I’m sure half of you will say the same, so here is a video that does a great job of showing of what the game can do, followed by an overview that not only covers game description and features, but platform plans and history. Let’s do this!

Putty Pals is a colourful, bouncy, and squishy cooperative two-player platform puzzle game, challenging two players to communicate and solve problems together. Players must guide two cute, brightly-coloured balls of putty through over thirty levels of obstacles and hazards in a vivid, cartoonish world.

The two characters can cooperate in a variety of ways. They can flatten themselves to form a high-bouncing trampoline, link hands to swing each other through the air, and much more. Colour-coded puzzles mean that both players will need to do their part to get the heroes back home.

Putty Pals will be coming to the Nintendo Switch and has currently been released for Windows PC and Mac. As it was developed in the Unity engine it can be ported to almost any platform, so the team at Harmonious hope to announce PlayStation 4 and Xbox One versions in the near future.

In October 2015, Putty Pals was a simple university project being shown at PAX Australia as part of the Swinburne University of Technology’s Games and Interactivity booth. It was immediately a big hit with the public, drawing particular praise from families with young children who have very few games they can all enjoy together. This success at PAX Australia convinced the recently-graduated development team to bring Putty Pals to market as a complete product, and Harmonious Games was born.

In February 2016 the new studio began working at The Arcade, Melbourne’s shared working space for the games industry. Being surrounded by developers with countless years of experience and chatting with them daily about the game-making process was invaluable for the fledgling studio. The friendly, collaborative atmosphere of The Arcade has definitely expressed itself in the deeply cooperative nature of Putty Pals.

So did it work? Are you totally hooked on getting Putty Pals when it comes to Switch later on this year? Let us know!