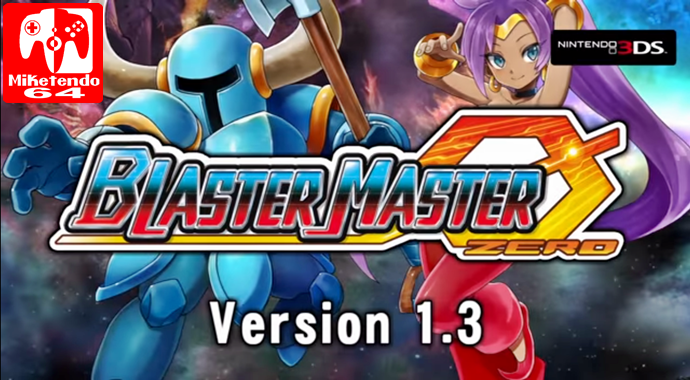 Get ready to have another reason to play Blaster Master Zero again, as two new DLC characters are on their way and the first one drops this week!

Revealed in an all new press email straight from Inti Creates, a new Version 1.3 update is on its way for both Nintendo Switch and 3DS versions of Blaster Master Zero and when it arrives on the 6th of July, so will EX Character Shantae! Yes that’s right, the Half-Genie Hero herself is coming to the world of Blaster Master Zero and just like before with the other DLC characters, for the first two weeks she will be available as a free downloaded.

Anyone who fails to download her during those two weeks can still get her, but it will cost you $1.99, but if she’s not what you’re looking for from DLC, then how about this? Shovel Knight also joins the battle as another free for two weeks DLC character, on the 3rd of August and we have a video of the two in action, right here:

We’ve also got plenty of photos and some character details that can be seen here:

Shantae joins the underground adventure as a playable character in EX Character Mode! Fascinate the mutant hordes with the power of magic and fancy dances!

During top-down view segments, use your Magic Meter to perform various magical attacks.

Fireball: Shoot a ball of fire that flies in a straight line.

Storm Puff: Call forth a cloud that fires lightning bolts. You can also move around while the cloud is attacking.

Monkey Dance: On side view maps, transform into a monkey that can climb on walls and jump much higher than normal.

Mutant Dance: Turn into a cute little GX680 mutant, trudge around, and fire away!

Elephant Dance: Transform into an elephant that can smash enemies and obstacles with powerful tackle attacks!

Shovel Knight joins the underground adventure as a playable character in EX Character Mode! Steel thy shovel and dig your way through the depths of the planet! For shovelry!

Shovel Blade: Wield your shovel and strike enemies up close and personal. Use it to destroy blocks and cracked walls that block your path.

Shovel Drop: On side view maps, press down while in mid-air to perform a Shovel Drop. When you use this and bounce off of enemies or blocks, you can jump even higher.

During top-down view segments, use your Magic Meter to use various relics.

Fishing Rod: Cast it into a pit, and wait for a bite!

Phase Locket: Escape from all harm…briefly.

War Horn: Clear space around you with a powerful blow!

Armor: As you explore the subterranean landscape, you may come across some new gear…

I said it before and I will say it again. It really is great to see Inti Creates going to such lengths to keep Blaster Master Zero going, especially when it was both a game and a series that deserved a comeback and now that it’s got one, Blaster Master Zero is going away any time soon! And if you never picked up the game in the first place, you might want to consider picking it up now. Not only is it affordable, but it is thoroughly enjoyable. But if you need to try before you buy, well there is a demo available now, so there’s nothing stopping you from giving it a go.

After all, you might just met the next Switch/3DS game you’ll fall in love with!