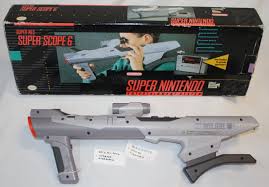 The days of the light guns. From its humble beginnings with a Zapper Gun on the NES for Duck Hunt and Wild Gunman – the days of shooting at the TV soon evolved into heavy artillery.

In todays review we take a look at the Super Nintendo’s Super Scope 6.

The plastic bazooka was bundled with a cartridge of 6 games.

Once choosing the Blastris option you are given a choice of three games to choose from – Blastris A, Blastris B and Mole Patrol.

These games were the equivalent of Tetris and SEGA’s Columns. You shoot away the blocks to fit the pieces in the gaps. It was a simple idea and clever shooter but tricky to master.

This involved protecting a garden from evil blue moles by shooting them. Much like Whac-A-Mole – this was one of the fun games that never got dull. Hitting a red mole speeds up the clock and increase the speed of the moles that appear. It featured two modes – Stage Game and Score Game.

Choosing this option gives you three different versions of the same game – Intercept, Engage and Confront.

In Intercept, the player must shoot down incoming missiles before they reach the opposite side of the screen. If the player misses more than five missiles then the game is over. Mario makes a cameo appearance piloting a plane chased by Iggy Koopa riding on a rocket.

Engage sees a player shoot down enemy fighters and incoming missiles before the players ship’s fuel runs out. You can shoot four bullets at a time but it takes some time to reload.

And last but not least Confront sees the player fight off an incoming invasion of enemy ships. In a similar style to other games like Space Invaders and Galaga – leaving the enemy ships too long it will attack. Unlike the other games this has infinite bullets.

Though showing its age now – and finding an original glass front TV to play this on as it doesn’t work on HDTV or 4K – the variety of games and compatibility was very small. It had hits like the Terminator 2: Arcade Game and Lemmings 2 but it wasn’t one you found yourself playing all the time even though some of the games were fun.

We won’t be seeing a new Super Scope anytime soon. Though the games could be ported over to the Nintendo Switch on the Virtual Console. Like Wii-U’s Duck Hunt was modified for the Wii-motes. In a way it’s a shame to see these games fade away into the past but this will always remain another Nintendo memory.