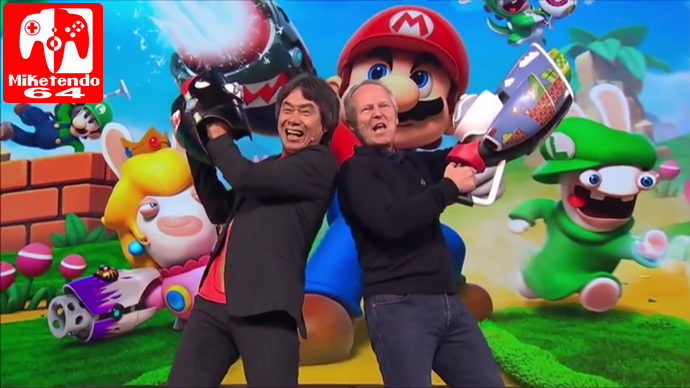 Now that Mario + Rabbids has been officially announced, all kids of details and videos are coming in and we’ve gone ahead and compile them for you. But before we make you read anything, first we’ll get you watching and we’re going to start with the announcement trailer:

And now that we’ve got the videos out of the way, it’s time to take a look at everything the Mario + Rabbids Kingdom Battle website has to say for itself:

This is the story of the unexpected encounter between the most iconic hero in the history of video games, Mario, and the irreverent, chaotic and adorable Rabbids. Embark with them on an adventure and discover the Mushroom Kingdom like you’ve never seen it before! A new world that the Rabbids have turned upside down, but that is full of secrets and winks to the classic games of Mario!

It is in the hardest moments when the heroes are born. Discover an epic team made up of eight heroes, each with its own personality.

Embark on an epic journey with Mario, Rabbid Peach and Rabbid Luigi to save your friends and restore order in the Mushroom Kingdom! Explore a huge world, solve mind-boggling puzzles and defeat unpredictable enemies on the battlefield.

Mario and his friends will use unusual weapons to engage in fierce combat against their enemies. Each character has its own arsenal to fight against a variety of rivals. Control a team of three characters and venture into the most explosive challenges!

Are the enemies coming for you? In my video game It’s more likely than you think! But do not be afraid, we’ve come up with a handy and useful guide to putting Rabbids on your site effectively. In Mario + Rabbids Kingdom Battle, your team is the backbone of combat. Each character has different abilities, weapons and techniques that you can use to stop your enemies’ You decide which team member is the most appropriate in each situation.

There are some rules of combat that you should know. Take a look at the battlefield, find out where your enemies are hiding and find the best strategic points to defeat them. Take cover when retaliating, then shoot right at the target! Repeat it over and over and you’ll become a first-rate shooter in a heartbeat.

Each character also has access to cool skills that can change the course of the battle in your favor. Each member of your team will be able to access a skill tree in which you can unlock upgrades and skills as you progress through the game.

Techniques such as Mario’s Hero View, which allows you to shoot an enemy moving within your line of sight, can offer a huge tactical advantage. It is important to always remember what skills you have available and use them appropriately to deal the damage or keep your partners safe and sound.

With so many weapons, skills and techniques to unlock and discover, you have many possibilities to modify your team and your tactics and that suit your style of play. But we will not extend further in this article, we know that you are willing to go out there and beat some! Keep these tips handy and remember to always do it with style.

The world of Mario + Rabbids Kingdom Battle is full of crazy characters, beautiful landscapes and worlds dedicated to explore. Today we will offer you a small advance of the world of Old Gardens.

Ancient Gardens is the first world you’ll find on your journey through Mario + Rabbids Kingdom Battle. As its name suggests, it is a mystical place full of vegetation, creatures, crystalline waters and, since the Rabbids arrived, some stinking constructions, among other rarities.

The Gardens used to be a quiet and peaceful place; The Goombas roamed the earth with their grumpy happiness. Now, however, the annoying Rabbids have taken over and painted the area with their characteristic color of chaos. It’s up to you and your team to regain power!

We are convinced that you will love exploring the Gardens. There are many treasures to discover and many surprises that you may recognize during the journey. Take your time to enjoy its amazing splendor!

And just in case you need another reason to check out this game when it launches later on this year in August, how’s this?

That’s right, Grant Kirkhope is writing the music for Mario + Rabbids and for anyone who likes to buy things from the Ubisoft Store, they can purchase official figures pertaining to the game and you can take at them for yourself by visiting the link below:

Stay tuned for more Mario + Rabbids news as plenty more is on its way!