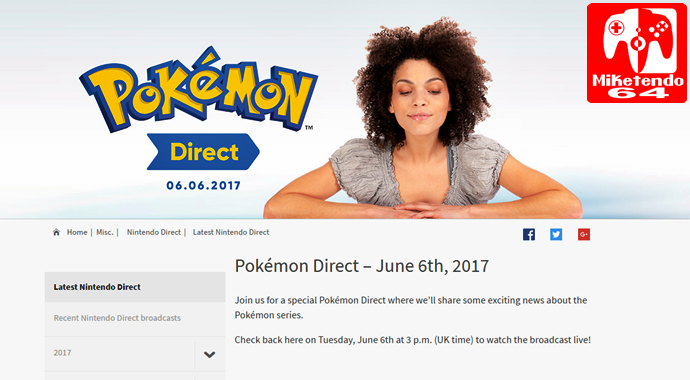 Time to dance with delight Poké fans as The Pokémon Company have revealed that on the 6th of June, 2017, a very special Pokémon Direct will take place!

There has been nothing specific stated about what the Direct will show, but it will only last for 8 minutes, so although there’s plenty of time to reveal a new game or even a remaster, just don’t get your hopes up too high, as we’ll most likely be told to expect more details regarding the game during E3, which takes place next week.

Now I thought about keeping this strictly news focused, with no trace of speculation, but I can’t help but wonder what exactly it is you at home would like to see? The Pokémon Direct could literally be about anything. For example it could be PokéLand focused, which is then revealed to be one of Nintendo’s forthcoming mobile games, but made in partnership with The Pokémon Company. Then again, it could be Pokkén Tournament for Switch, and being 8 minutes long, it means there’s plenty of time for all fighters from the arcade version (arcade version has more than the Wii U version), to be confirmed plus Gen 7 additions Incineroar and Bewear. (Be honest, those two would fit right in!)

Or it could be the very thing many of us are hoping for and the Direct official announces Pokémon Stars for Nintendo Switch. Whatever the reveal is though, it is bound to be a great one, which means missing it is not an option! So for those of you who are keen on watching it, below is a list of the following times the Direct will take place, followed by a link that you can use to watch it:

When the event is over, coverage of the news can be seen here:

Or you can see coverage of whatever is revealed here at miketendo64.com. The choice is yours.