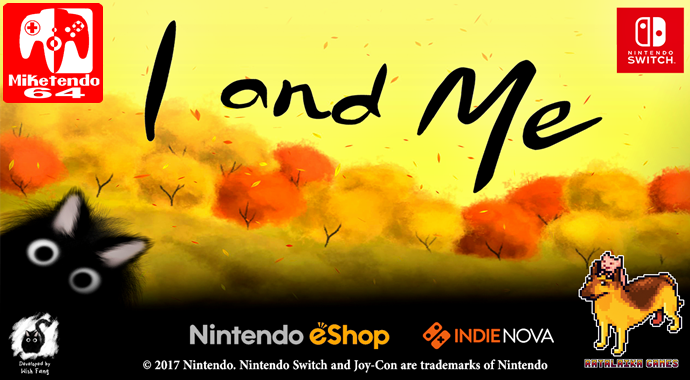 I hope you’re sitting comfortably because we have some Switch news that might just rock your socks off.

While we have shared news regarding Ratalaika Games’ works in the past, today we got officially a reveal a game for the Nintendo Switch, which even Ratalaika Games haven’t even said or hinted anything about and that game is I and Me.

The name should be familiar as it got quite a bit of attention over on Steam and now it is set to do the same as Ratalaika Games will be handling the North American and European releases, with Rainy Frog Games handling the release for Japan. The worldwide release will take place in the month of July (next month) and will be Ratalaika Games’ first released game for Nintendo Switch. (Although Ratalaika Games handled the Switch port of Plantera, which releases in Japan on the 8th of June under the name of Plantera DX, Ratalaika is solely responsible for the port and not the publishing as Rainy Frog Games have that honour.)

As for what kind of game it is and what you can expect from it, the answers can be found in the official announcement, (which has been sent to us in advance). Happy reading:

Ratalaika Games – A few weeks ago Ratalaika Games revealed ourselves to be Nintendo Switch™ developers. Only since said reveal, we have only revealed two games for Nintendo’s new platform, so let’s change that.

We will not be sharing the release date just yet, as it has yet to be finalised, but we have prepared a special announcement trailer for you to watch, as well as a brief overview and a summary that covers some of the game’s features.

I and Me Overview:

“If there were another me, observing myself from the perspective of a spectator, how would I regard another me? How would I get along with the other me?”

Previously released on Steam, I and Me is a puzzle platformer by Chinese developer Wish Fang. A game where you control two cats simultaneously and must perform the same action.

Players will need to manage both of them at the same time and let them coordinate to complete the adventure. The game has four chapters based on four seasons with a total of 92 levels. Sometimes you must think carefully, and in some places you need to be flexible. The soundtrack of the game is soothing with orchestra and piano music, each season has its own style.

Please be sure to like us on Facebook and follow us on Twitter to stay up to date with all of our Nintendo Switch news as we have plenty more in store for you and will share it all when the time is right.

But that’s not all, for we also have a number of screenshots to share and the promise of I and Me news in the coming weeks as Mietendo64 will actually be hosting a Nintendo Switch giveaway, in which will see us give away download codes for the newly announced Switch title.  Details on how you can win a code will be shared later on this month, so until then, here’s a quick gallery of some I and Me imagery: