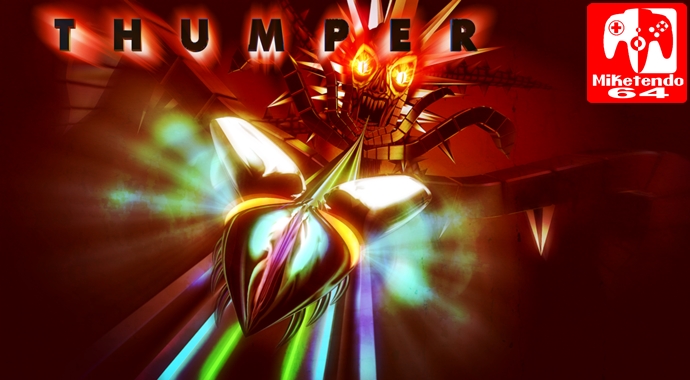 Designed by a small team of two and originally released back in 2016, Thumper was the violence/horror rhythm game that left a mark on all those who played it, especially when playing the PlayStation VR version of the game and now it has made its way to the Nintendo Switch eShop!

Granted the game is a port, much like many of the other games playable on Switch, but you know what? It works tremendously well. So well in fact that in TV Mode it is 1080p and runs at 60fps whether in TV, Handheld or even Tabletop Mode, which means there really isn’t all that much difference between the Switch and PS4 versions of Thumper. So not only does Thumper run great, but being the unconventional rhythm game that it is, it looks great too and has an epic, heart pounding soundtrack courtesy of Brain Gibson. (As well as being the composer for Thumper, he’s also the bassist for Lightning Bolt.)

But all of that is good and all, but if you never played Thumper when it first come out, or got round to it when it released in the Switch eShop this week, than there’s a good chance you that other than being a self-described “rhythm violence,” have no idea how the game plays, so let’s correct that. In third-person view, players control a space beetle, which travels at a blistering speed in an attempt of escaping “rhythm hell,” in the hopes of reaching “synesthetic heaven.” Only it’s not going to be the easiest of journeys, as the space beetle must confront its nemesis (essentially a giant mechanical head, which is described as being from the future), and complete 9 levels that requires successfully navigating dangerous obstacles such as high-speed tight-turns and more.

The fact that Thumper only having 9 levels might be something that puts off some players due to possessing such “minimum content,” but that is not the case. While it is true the game does feature 9 levels, Thumper has both a Play mode (the main campaign,) but there is also a Play+ mode and each level is made up of segments, which do add to the game’s longevity. Plus you know what else adds to the game’s longevity? Just how difficult it really is!

Thumper won’t just challenge you, it will shape you, mould your will and then crush your spirit. Sure the earlier stages are thing as they subtly get you used to the controls and perfecting your timing to pressing the button to hit the lit “notes” that scurry along the endless track, but as soon as the basics are beseeched upon you, the game literally becomes a rollercoaster and that high you feel upon completing level one, is about as high as you’re going to feel for an hour or two, because if you can survive and surpass Level 2 within the next 20 minutes you play, then get ready for a descent into literal hell. Not every game makes people cry, but Thumper is definitely one that tries its hardest and that’s not bad for a game that essentially requires only a single control stick and button to be used when playing. (And yet despite the whole one stick one button thing, Thumper on Switch doesn’t support playing with a single Joy-Con.)

One thing that Thumper does have in its favour other than its in-game leaderboard, is the fact that lives are infinite so even when you do die, die again and just keep on dying, you can keep on playing and every time you do have to restart, instead of restarting at the very beginning of the level and working your way back to the segment you were on, you restart from the segment your own (meaning if you die on 2-4 you will resume on 2-4, but will do so at the beginning of the segment.) Even better though, should the level/segment prove too difficult for you, you can always quit and resume playing later on from where you left off. After all, the further down the rabbit hole you go, the more the basics go out the window and you find yourself forced to mastering much more advanced “techniques.”

As for what happens when you make it to the end of every segment, your performance will be evaluated, resulting in you getting a rank and a score and when you complete every segment on a level and survive the epic boss battle that awaits, your scores are all tallied together for a final level score, but just in case you’re still thinking about the constant dying aspect the game has, the space beetle can take one hit, it’s not always an instant death, just most of the time though.

Besides thanks to being the Switch version of the game, this version of Thumper comes complete with HD Rumble, and when the Joy-Con Controllers are undocked, they really show off just how vibrantly they can shake, in reaction to all that goes on whilst playing, as a means of accentuating every it, impact and crash to ensure a more immersive experience that is intensely physical. But with HD Rumble is not your “bag,” you can of course lower the Rumble intensity and even turn the HUD off, which would be pointless, since it’s not going to improve your performance. The only thing that can do that is practice and lots of it.

The fact of the matter is, Thumper is a hard game, even from the get-go and it gets insanely worse before it gets better, but for this writer who enjoys a challenge, it’s not a problem. It is however a problem for other players as this is something that could put off a considerable amount of Switch owners. Furthermore, while the earlier levels and stages are something you can play and tolerate in long sessions, but after Level 5, shorter play sessions are recommending, as anything longer than half an hour is a just a good way to frustrating yourself unnecessarily due to dying for the umpteenth time. Regardless of it all though, I did enjoy Thumper, I did enjoy the music and I especially enjoyed the torment, but I’m a sadist anyway, so I’m giving Thumper a smooth 7/10. While it is not a game I would recommend to everyone with a Switch, to those of you who do enjoy a challenge, it is something you will want to check out if you haven’t already.