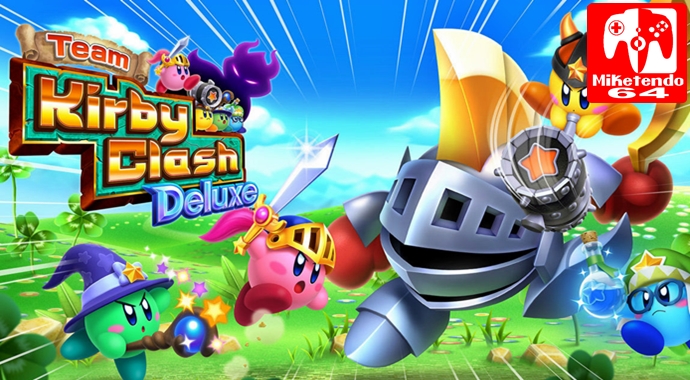 When playing Kirby: Planet Robobot, did you ever find yourself wishing the sub-game Team Kirby Clash would be made a fill title in its own right? Should you have answered “yes” then rejoice for Team Kirby Clash Deluxe is that wish come true, whilst standing as the first of three Kirby titles announced and planned for release in 2017 for the Nintendo 3DS, in celebration of Kirby’s 25th anniversary.

Unlike other Kirby titles, Team Kirby Clash Deluxe is the first ever free-to-start Kirby title, which is very similar to the sub-game it almost shares its name with, but does possess some noticeable improvements, which includes all new stages and bosses, but before we get into that, first let’s start with its story. In a faraway land, exists the Dream Kingdom, a once peaceful and a beautiful land that now finds itself under attack from a sudden onslaught of enemies and its only hope to have peace restored, is if a willing team of Kirbys step forth!

It may not be the best story in the world, what with it being one we’ve had time and time again, but it’s Kirby so you know it’s going to be different to what we normally get, but do expect a lot of similarities to The Legend of Zelda: TriForce Heroes and I mean a lot. Team Kirby Clash Deluxe shares a similar style, set-up and even feel, but then lacks a top down world, as it takes a side on view instead and skips puzzle completing entirely and has its levels focused purely on the games “epic” Boss Battles.

Still the boss battles are no laughing matter. In fact should you find your team too ill-equipped for battle, foes such as Kracko, an Ordeal Boss, will easily devastate, so ensuring they are wearing the best armour and wielding the best weapons available is something you will want to make a priority. But I’m getting ahead of myself, so let’s dial it back a bit and pay a trip to coverage of actual gameplay.

With the opening story shared, our Hero Kirby finds himself in a small hub world, a place where Gem Apples grow upon the Gem Apple tree that can be found by the insightful Bandana Waddle Dee. Why insightful? Well he’s the Waddle Dee who will tell you what’s what and where to go, starting with a visit to the Grasslands where you can get your first battle underway against the Colossal Waddle Dee. Still there’s no rush to begin the battle as players can choose to change their class between the available 4, which are of course Sword Hero, Hammer Lord, Beam Mage and Dr. Healmore.

Each class has something of its own to bring to the table, such as the Hammer Lord being able to deal greater damage at the cost of poor agility. Sword Hero can move, attack and use a shield to provide shelter to allies, whereas the Beam Mage can fire beams and freeze time, as Dr. Healmore can whip up an assortment of potions that go a long way to healing teammates when stood in the Healing Area. But just because there are four different classes, it doesn’t mean your team needs to consist of 1 Kirby of each class. Should you wish to have a team of 4 Sword Heroes than that is exactly what you do.

After all, such a thing is handy in the earlier stages of the game as the technique can earn you a handful of Gold and Platinum Medals. (In order to get the illusive Platinum medal on each stage, you will want to deal as much damage as you can to the boss/bosses in as little amount of time as possible.) But it’s not just medals you can earn from defeating bosses and stages, but also EXP to level up your teams stats (which includes vigour, but more on that later) and items such as Light, Fire and Water Fragments that can be used to craft gear you buy from Magolor’s Shoppe. You will however need Gem Apples should you wish to buy anything from the game’s store though, as Gem Apples are the game’s only form of currency, so it’s a good thing they grow on the Gem Apple tree. Only when starting out, the tree doesn’t offer much in the way of harvesting, so it’s a good thing you can collect apples from it once every 12 hours and get them via completing the game’s 256 Heroic Missions that can be completed in all manner of ways, which includes buying three items of gear from the Shoppe.

But because we are not yet done talking about Gem Apples and what they can buy, here’s another paragraph dedicated to their use, starting with the tree. While it is tree the tree offers little when starting out, should players choose to hasten their advancement in Team Kirby Clash Deluxe, they can of course opt to spend some real-world money on Gem Apples, thus causing the Gem Apple tree to grow should the required amount be purchased. (For the first upgrade, the player must purchase 50 Gem Apples that they can then use in the Shoppe to buy weapons, armour and even items such as the Champions Codex’s, which in turn have special effects of their own.) But this is optional, and not a necessity.

Something else that is optional but not a necessity is using amiibo as amiibo can be scanned in daily to receive Fragments that will go a long way to seeing your supply expanded for when the time comes to buy an item/piece of gear you sorely desire. And something else that fits the bill (operational, but not a necessity) is inviting random players (aka Wandering Adventurers) to your game for free once a day. Not only will these players come bearing gifts, but they will even stick around to fight three battles, so should you find yourself unable to best one level in particular, this could be the way you go about beating said troubling level until the time comes when you have further advanced and can do it by yourself. (Team Kirby Clash Deluxe also supports StreetPass, so StreetPass Adventurers can be encountered as well and serve in a similar manner.)

Still if playing with actual other players is what you desire, than rejoice for as well as Team Quest (the main mode, in which you play yourself with CPU operated teammates,) there is of course Wireless Quest, a mode in which you can play with other players towards the same goal (beating the boss within the time limit, completing Heroic Missions and should they fall, collect every Power Tablet piece to summon forth the Team Meteor in a bid to deal a devastating blow to the enemy boss.)

For both modes of play, failing to defeat a boss within the time limit does not end in immediate failure as players can choose to redeem a couple of Gem Apples to add another 30 seconds to the clock, but should they all fall in defeat, due to failing to heal one another with food that falls throughout each battle, or entering a Healing Area, again Gem Apples can be used to restore the team to life. However, since you can revive one another during battle, this is of course your best bet, since you are much better off using your Gem Apples to purchase access to locked quest levels and well needed arsenal.

Just don’t expect Team Kirby Clash Deluxe to be a game you can play for hours on end, as each level does require a certain amount of Vigour (aka Stamina) and once it’s out. You are of course unable to try your hand at another quest, until either enough time has passed and Vigour has restored or you use Gem Apples to speed up the process, in which case it would be a waste. Why? Well one such item that can be purchased is the Code of Vigour Codex and there are quite a few volumes of it and every time each one is purchased, the amount of time it takes for Vigour to replenish is shortened. There’s also the fact that levelling up also refills your Vigour, whilst improving it as your stats get a well needed boost.

For a game that did in fact start of as a mere sub-game, it is interesting to see what it has become due to being given this chance, and it is really enjoyable as well, even if you’re not a Kirby fan, so with everything I’ve said up until now, I think it’s time for the conclusion!

If you are looking for a free-to-start Kirby title that comes across as being something reminiscent of TriForce Heroes meets virtually any Monster Hunter game in existence, then Team Kirby Clash Deluxe is that game you seek. Sure more locations other than the 6 it has now, would have been nice, but with a total of 256 Heroic Missions for players to complete, many of us will be investing a lot of time into the game, especially those of us who have a Kirby: Planet Robobot save file as such a thing allows us the right to purchase gear and armour from Robobot. But Team Kirby Clash Deluxe is something of a delightful game to play, so I’m going to be nice and give it a 7/10. It’s not really my cup of tea, but it is enjoyable, it’s free to download, so it doesn’t cost anything to give it a try to play and it is something I would recommend. So much so that if you haven’t downloaded it already, I employ upon you now to do so, as there is a very good likelihood that you might actually enjoy it and on that note, here ends this review!