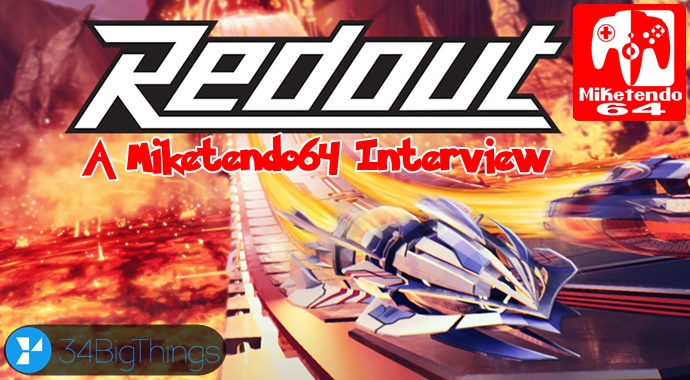 The Nintendo Switch doesn’t have one fabulous, futuristic-styled racing game launching on the new console this year, but two as Redout will also be making its Switch debut and while we may not have been able to secure a FAST RMX interview, we did land a Redout one! Join us as we hear from Giuseppe Franchi of 34BigThings, as he opens up on the upcoming title:

Hi Giuseppe, thank you for taking the time to do this. Would you mind starting things off by introducing yourself? Telling us a little about your role with Redout and give us a little background on 34BigThings?

Giuseppe Franchi: I’m Giuseppe Franchi and I’m the Lead Game Designer. Basically, I was the one drawing the racetracks, placing splines and adjusting them point by point, the one who for two years, played with input systems, physic forces, steering and acceleration curves, grip force variables, until we found a combination that we all liked.

34BigThings is a company we started in 2013. We were 3 friends who took got our Masters in Video Games abroad: we decided to move in together and begin working in our shared living room. We were doing work for hire, until we started playing around with our own prototypes.

In 2014, the Redout prototype came. We started expanding since then, to properly complete the game and keep other B2B projects alive in order to sustain ourselves: today we’re about 30.

Redout in a Nut Shell:

Miketendo64: Right from the get go and for our fans who don’t know, what is Redout?

Giuseppe Franchi: Redout is the fastest Anti-Gravity racing game you can imagine. It’s so fast that your blinking routine will change: I guarantee you will feel your eyes dry after a race – it happens to me. It’s low poly, colourful, beautiful, elegantly designed with an innovative dual-stick control scheme and a super-high skill ceiling. It’s a labor of love we squeezed out of sleepless nights and weekends, it’s our idea of a blazing-fast unforgiving test of skill, reminiscent of the classics of the past. If you think you’re good at racing, now’s the time to prove it.

Miketendo64: Being so you are only a company that started in 2013 and four years later you already have three games, one of which (Redout) is coming to the Nintendo Switch, how does it feel knowing you’ve accomplished so much, in so little time?

Giuseppe Franchi: I still have trouble understanding what’s going on. To think that we, as a company, may have something to say in today’s videogame market is empowering to say the least.

Miketendo64: Well you guys deserve it. You do some great stuff!

A Tribute to the Classics:

Miketendo64: Now in your description on the website, its written Redout is “a tribute to the old racing monsters such as F-Zero, WipeOut, Rollcage, and POD.” I’m guessing you guys would have to be something of a fan, so which racing series is your favourite and why?

Giuseppe Franchi:  I used to play a ton of racing games when I was a kid. The ones you mentioned, plus more underground stuff such as Dethkarz and Killer Loop. One of my personal favourites of all time is Screamer Rally, which made me buy my first 3DFX video card. But I’m also a big fan of Need For Speed III (the old Hot Pursuit) and NFS Underground, Monster Truck Madness II, Colin McRae Rally, TOCA Touring Cars, the Gran Turismo series, GRID/DIRT, and especially Trackmania. Trackmania Nations Forever was the most played game on my laptop while I was taking my Master’s in Games. It’s such a beautiful, entertaining and well-crafted game.

Miketendo64: So while the Switch might not be seeing the release of a new F-Zero title any time soon, it will see the release of two indie racing games, FAST RMX and Redout. Are you at all concerned about how Redout will fair in terms of sales, due to potentially receiving competition from FAST RMX?

Giuseppe Franchi:  Honestly, the anti-gravity racing genre has been so neglected for so many years that I’m happy FAST RMX is coming too. I’m also really happy that the Wipeout Omega Collection will hit PS4: players who love the genre are starved for these kinds of games.

If we had 10 valid titles competing against each other the situation would be different, but current things standing I think we can make our own fortune. If the game sells well or doesn’t, it will be down to us.

Miketendo64: Given developing games is never easy, no matter how much experience you have in the industry, so what are your highs and lows during Redout development?

Giuseppe Franchi:  We still have to write a proper post-mortem, because we feel Redout is still in development, but I can think of a couple of episodes.

A low point was at the end of 2015, when we initially predicted to launch the game and realized we weren’t ready for it, by far. So much that we decided to take all the time it was needed in order to properly finish the game and have a product we could be proud of: we ended up releasing in September 2016.

A personal low was in Las Vegas, when we showcased Redout at EVO. There, I realized the driving model I had put together in two years, something I though was rock solid and one of the game selling points, was in fact terrible. Players kept crashing into walls, couldn’t read the track and had no clue what the next turn would be, and their vessels had not enough steering power to properly respond to their input. It’s not that we didn’t test with other people before: just that I didn’t expect hardcore gamers to have so much trouble.

It was soul-crushing to see professional Street Fighter players struggle, constantly slamming into barriers and blaming themselves for doing so, but at the same time it was illuminating. I couldn’t wait to go home and make adjustments. After that event, we worked on the turn signals and on the ship responsiveness, and our game improved a ton overnight.

Launch day was unbelievable, as positive reviews kept flocking in and our forums started filling up with appreciation, intelligent feedback, screenshots and let’s play videos. I felt like I’d spent three days floating on a cloud. I couldn’t believe so many people would actually understand what we tried to accomplish, and appreciate the game so much. I’ve never felt that way before.

34BigThings Do Have an “Overly Ambitious Project” in the Works:

Miketendo64: When all is said and done with Redout what comes next for 34BigThings?

Giuseppe Franchi: Hard to say at this point There are a lot of viable options open for the company and we’re evaluating carefully what to do, including an overly ambitious project we already started working on. Personally, I’d love to see what we could do as a studio at this point. Keep in mind that Redout was fully self-funded, so we had to do work on the side while developing it – which caused so many overtimes, headaches and delays. Now the situation has changed and I’m super excited to test ourselves again on a fresh canvas.

Miketendo64: Well whatever it ends up being, best of luck with it!

Miketendo64: We live in an age where dlc is becoming more and more common. Are there any plans to support Redout with more additional content and updates long after its Switch release? Or is it a case of “Get it done, get it out and get on with the next one?”

Giuseppe Franchi: Hah! We’ve never stopped patching the game since launch. In fact, we’ve released 6 patches, adding ship liveries and color schemes, global leaderboards, multiplayer lobby chat, cockpit view, fixing a ton of bugs and improving performances (especially on VR), plus releasing a whole DLC for free with 5 extra racing tracks on a new environment. So no, this is definitely not a case of “push the game out of the door and see ya folks”. This is our first time receiving this much attention and we want to build a good reputation as developer.

Miketendo64: Well since we’ve yet to talk about the tracks and the apocalyptic world they tracks preside upon, let’s talk courses! Which one is your favourite and which one has been on the receiving side of complaints?

Giuseppe Franchi: I think my favourite track has to be Cairo Simoom. With its S turns, the open left turn that climbs above the river, and the blind right turn that dives inside a rocky canyon. I think that track has a unique rhythm to it and really rewards good drivers, besides looking effin beautiful. I also like the new Europa tracks, although some players on our forums complained about the lack of side barriers – there are some points in which you’ve got to pay attention in order not to fall off the track, and especially Surface Sprint as it is really tricky.

Miketendo64: Onto a question I should most definitely ask, since the release is imminent and we’re literally less than two weeks away from the release of the Nintendo Switch, will you be purchasing the console and what Switch titles are you most looking forwards to playing?

Giuseppe Franchi: I’ve never owned a Nintendo console, shame on me. I’ve played a lot of Nintendo games when visiting friends, but I think I might finally decide and get my first one with the Switch. I’m looking forwards to playing Fast RMX and Zelda and am hoping for a new F-Zero!

Miketendo64: A New F-Zero? I think a lot of us are hoping for that, and Metroid!

Giuseppe Franchi: Don’t give up easily, keep being a good sport, and do open multiplayer lobbies!

Giuseppe, you were absolutely fantastic, so thank you for taking the time to answer our questions. I can’t wait to play Redout on the Nintendo Switch!

One thought on “[Interview] Racing towards the Nintendo Switch (Redout)”