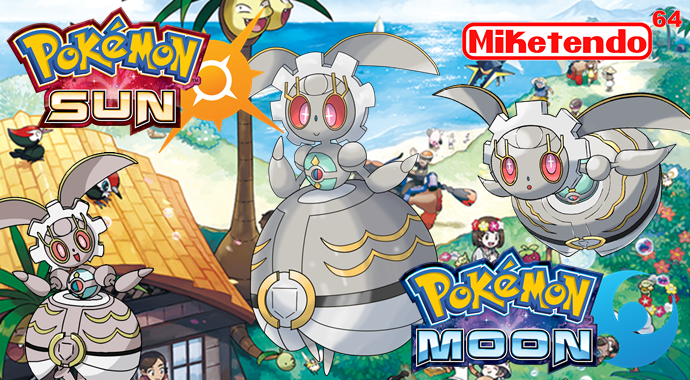 Trainers, the time has come to claim your very first Mythical Pokémon in Pokémon Sun and Moon and we’re on hand with our Miketendo Guide as to how you can get your very own Lv. 50 Mythical Magearna.

In order to get Magearna, you will need to complete the main story (become Alola’s first Champion after beating the Pokémon League), so if you haven’t yet, then that is the very first thing you will have to do. To those of you who have beaten the game, fire up your QR Scanner and scan the QR code you see below:

*Warning! QR Code can only be scanned once per game.

Once scanned, you will need to go to the Antiquities of the Ages shop, which is found in the Shopping District of Hau’oli City on Melemele Island. (The shop can be found inside the Hau’oli City Mall, which is the building closet to the right of the Pokémon Centre).

At the Antiquities of the Ages shop, you should notice a man dressed in a yellow t-shirt with blue strips and blue shorts. This is the deliveryman for Pokémon Sun & Moon, who you should recognise easily provided you claimed Munchlax via Mystery Gift and transferred Ash-Greninja and all the items you obtained from the Sun and Moon demo, as he is the one who gives them to you.

Talk to him and he will hand over your Magearna and then leave before a small discussion will ensue. When said discussion is over, you are left with two things to do. The first is celebrate you have acquired a Mythical Pokémon for Sun & Moon, and the second is to try Magearna out in battle.

And since this is a guide, it’s only fitting we also provide details regarding the Pokémon, so here it is:

Description: “Magearna is a Mythical Pokémon that was created by a scientist of uncommon genius 500 years ago. Magearna has the power to perceive the emotions, thoughts, and feelings of other Pokémon. If a Pokémon is injured, Magearna will feel the other’s pain and suffering and will try as hard as it can to save that Pokémon.

Magearna’s real body is the spherical construction in its chest called the Soul-Heart, created by a scientist who gathered the life energy from Pokémon.Magearna has the ability to transform itself into the appearance of a Poké Ball! It does so when it sleeps, and apparently also when it’s sad.

Magearna’s Ability is the Soul-Heart Ability, a new Ability that no previous Pokémon has had. Soul-Heart has the effect of raising Magearna’s Sp. Atk by 1 each time another Pokémon in the area faints. This is a new Ability—one that can be put to good use in battle.”

*For anyone who would like to know more Magearna regarding Base Stats, Moves learned via Levelling up and more, be sure to click on the link below:

We hope you found our little guide most helpful and informative, but the most important thing of all to take away from all of this is the code works indefinitely, so even if you don’t complete the story this month, you can always finish it next year and then scan the Magearna QR code.