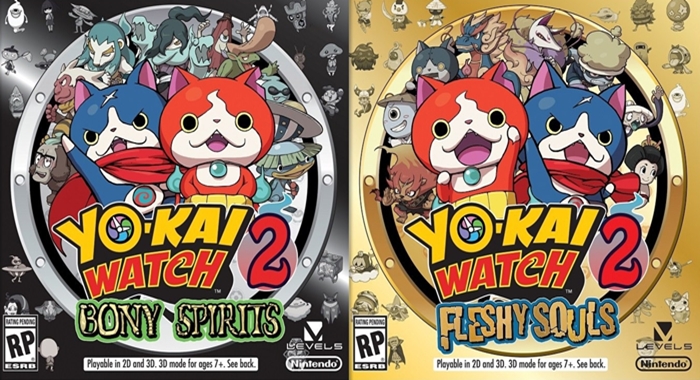 Yo-Kai Watch is proving to be something of a hit in the States, and with September getting so much nearer, it means we’re getting to closer to the release of Yo-Kai Watch 2 and both versions of it.

Just like with a main series Pokémon game, Yo-Kai has a Red and a Blue choice, expect here its Bony Spirits and Fleshy Souls, and yes they will feature some differences, such as different Yo-Kai. Except now it has been revealed that even physical and digital versions of the game have their very own bonus to offer gamers. Should you purchase a physical version of either game, you will get an exclusive Yo-kai medal from Hasbro that can be used by scanning it into the game, to give Jibanyan a new powerful in-game Soultimate Move. But just bear in mind that if you buy Fleshy Souls, you will get a medal exclusive to Fleshy Souls and not Bony Spirits, so if you want both medals, you’ll have to buy both games in physical versions.

However if you prefer to buy digital games, you won’t be getting your hands on an exclusive medal, but you will be able to battle and befriend new Yo-Kai Sailornyan or Robonyan, depending on which version you get. Clearly purchasing your next Yo-Kai adventure is not going to be the simplest of choices, but at least there is some time between now and then to decide, unless of course your mind is made up already. If that is the case, why not comment it below? We’d love to hear it.