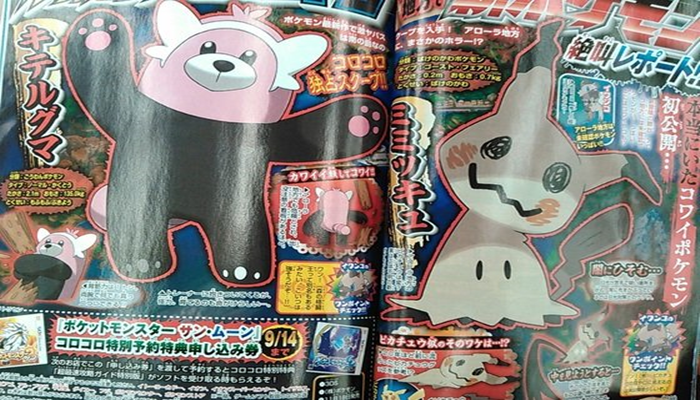 *UPDATE (13/07/16): It has also been revealed that in next month’s issue, due for release on August 12th that CoroCoro will feature a special “Southern Island Alola Guide,” which is stated to “give all the important information that you need for your journey.”

Sun & Moon may still be four and a bit months away from releasing, but the Sun & Moon news keeps coming as the latest scans from this month’s CoroCoro scans have revealed 2 more new Pokémon.

In no particular order, first up is Mimikkyu (Japanese name,) who just so happens to be one of the most interesting Pokémon we’ve seen so far of the Gen VII line-up and my favourite of the 2 Pokémon that were revealed today. Why interesting? I don’t know, maybe it’s because Mimikkyu is a Ghost/Fairy]type Pokémon that detests sunlight, so to ensure none of the sun’s rays shine down upon it, Mimikkyu hides itself by wearing old merchandise that just so happens to be a Pikachu costume that was once popular 20 years prior. It is believed that it is bad luck to attempt to remove the clothing, because by doing so, you will fall sick, due to an illness. It is also believed that Mimikkyu chose the Pikachu costume, because it wants to be loved just like Pikachu is loved and all I can say to that is don’t you worry Mimikkyu, I like my Ghost-types and when I get my hands on my copy of Moon, I choose you! I have a feeling that your Disguise ability will come quite in handy.

As for the other Pokémon revealed today, we have Kiteruguma, the giant teddy bear you won’t want to hug, because this Normal/Fighting-type has a habit of breaking things into two and even those who live in Alola are afraid of the strength Kiteruguma possess. In fact they are so afraid of it, they even have warning signs and it is believed that raising one could be especially dangerous, since Kiteruguma does like to give its trainer a hug with its strong, powerful arms, but should you decide Kiteruguma is the bear Pokémon for you, then you might want to try catching more than one as they can know the abilities Fluffy and Klutz, but the only way to know which one is best for you, is to try them both.

Just as soon as additional details emerge on these two, or even a video, we’ll be back to post about it, but until then, here’s a video from TheFlamingZebra and his reaction to CoroCoro’s reveal: