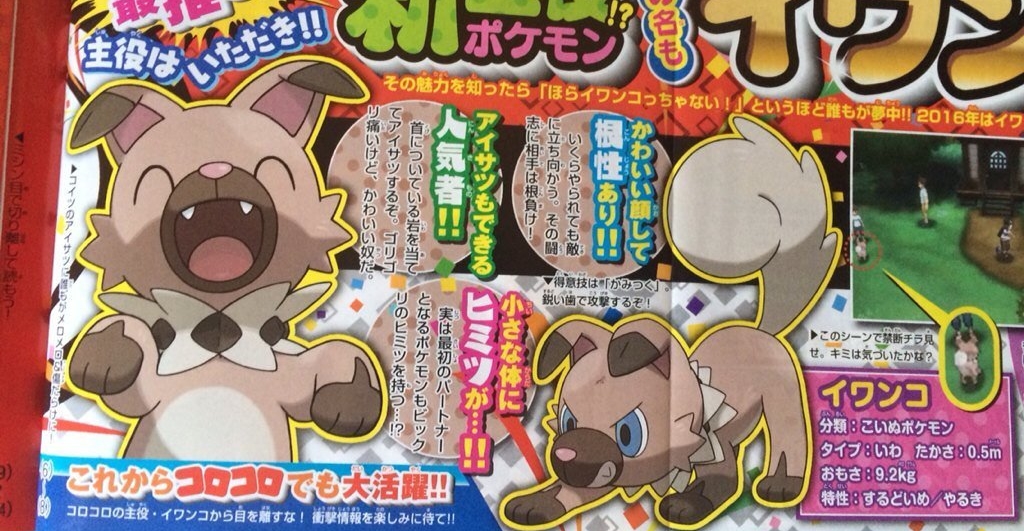 A Koala for Alola! Iwanko & Nekkoala Revealed for Sun & Moon

Well if there was any doubt that CoroCoro would only delay the huge reveal once more, all worries can now be laid to rest as scans from the upcoming easy have confirmed two new Pokémon for Sun and Moon, ones a puppy and the other is a koala!

The two new Pokémon go by the names of Iwanko & Nekkoala, but although this is our first time seeing Nekkoala, Iwanko we have seen before. Remember the unidentified Pokémon we saw in the footage when the trainer leaves the house? Yeah that Pokémon, that’s Iwanko, a Rock-type puppy Pokémon that stands 0.5 metres tall and weighs 9.2kg. Known move is Bite and Iwanko can have the ability Keen Eye or Vital Spirit. One last information shared about the new Pokémon mentioned by the magazine, hints that there is a secret involving the one we saw in the footage and its first trainer. On Serebii.net however, they hint the secret pertains to Litten, Rowlet, Popplio and Iwanko.

The other Pokémon revealed is of course Nekkoala, the half-awake Pokémon, who has the ability of Deep Sleep, which prevents it from succumbing to any status condition other than sleep. No moves seemed to have been revealed for Nekkoala, but it is a Normal-type Pokémon and is shorter than Iwanko, standing at a height of 0.4 metres, but weighs over twice as much, coming in on the scales at 19.9kg.

Still this wasn’t the only reveal we got as part of the CoroCoro scans, because as well as these two Pokémon we’ve also got news on more Pokémon distributions. Firstly anyone who attends the upcoming movie next month will be able to get their hands on a special Greninja, as part of a Greninja event based on the recent general election. Greninja will come with the ability Protean and the following move-set:

But even then that is not all because attendees to the fee will also be able to get their hands on a Pokémon Ga-Olé disc, which will contain a QR code that can be scanned for Sun & Moon to get your very own Lv. 50 Magearna. A Magearna who has the Soul Heart ability (the very same ability the Magearna-EX card possesses,) and the following moves:

All in all it has been a pretty good reveal and gives us something to really look forwards to as we move closer to E3 and the Pokémon Sun & Moon footage we can be expected to see during the event. We’ll be back as soon as we know any more on this.