This week, in the name of videogame studying, the Miketendo64 team got our hands on that all new colourful, inktastic game from Nintendo, Splatoon, and as well as doing a review on single player game-play, today, this particular piece, is actually about Battle Dojo, the head-to-head game mode, where you and a fellow gamer can take up gamepad and remote and get ready for war. So let’s ditch the story mode, no need for heading to Octo Valley, where Cap’n Cuttlefish awaits our arrival, the Octarians can wait.

Now before you start thinking this piece is going to be one of those, how to play the multiplayer mode, it isn’t, this is a piece to give you advice on how to OWN multiplayer, but unfortunately before we can get to the art of Owning, first it’s time to pick a main weapon, which comes with its own sub weapon, but upon mastery of the technique I have to share with you, sub weapons, just aren’t needed. So let’s pick a weapon, for me there’s two guns that I don’t mind trying, but for my killer technique, the Aerospray MG, is my weapon of choice. 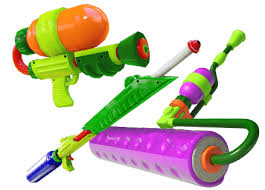 With both players ready and guns chosen, it’s time to pick a level and really, out of the five presented, it really doesn’t matter where you go, so just go with personal preference, the one you’ve mentally mapped out and know as well as the back of your hand. The five levels are as followed:

Just before you do pick your chosen battlefield, you have the option of reading battle rules, which are summed up below:

In the final minute, balloon points are worth double.

Matches are 5 minutes long, if neither player can score 30 points, the player with the higher score, wins.

Also if splatter, aka, gunned down by ink, the splattered player will lose points and return to gameplay within seconds and it is this rule that is the game changer.

You see you don’t have to be the best balloon popper to win this game, the best shooter or even the best gamer, you just have to be a sneaky bugger and the game is yours. Leave your opponent to chance down the balloons and start splattering, what you should do is get busy splattering the turf with your ink, so you can easily slide across the level in ink form. It is in this camouflaged state that you stop being a random Inkling, but a killer hunter ready to strike. Now you are the Predator, hunting Arnie in the jungle, except instead of a cool gun that blasts laser, you never got your laser licence, so an ink blaster is all you’re allowed, but still damage will be done. With your balloon inking, glory seeking challenger busy trying to oust you on points, you can spend the first two minutes of the battle, using the art of sneak attack, pooping out of the inkwork and taking down your opponent before they even know what’s happening. And if you’re that fast at taking them out, you should easily leave yourself with a couple of balloons to steal too, racking your own points up, edging closer to total victory.

Sure your constant sneak attacks will annoy your challenges, but hey, the act of Predator, is a noble gaming technique, after all, if you’re player 2, playing with the controller, player 1 already has an advantage over you, they can see both the screen on their gamepad, and the tv screen, knowing where you are the entire time, sneak attack is just that way of evening the odds, without the use of having to destroy the crates, dotted around the level and using the canned specials, cans containing a special weapon you can use for a limited time, weapons such as: Inzooka (briefly turns your chosen weapon into an ink firing bazooka)

Inkstrike (a lethal strike from above, blasting ink at your enemy player)

Super Jump (you and your opponent swap places)

However for those using the “Surprise! Surprise!” method, then there is something you need to know. If you’re an observant enough player, you can actually see your fellow player, moving around in their ink trails, in their squid form, which means as the hunted, you can spot your hunter coming a mile off. But as a hunter whose prey is trying to escape, you can still splatter them to death, preventing their immediate escape, after all what kind of hunter would you be if you let your quarry escape? You’d be the laughing stock of all the other Inkling Predators, you don’t want that now. Plus if you’re shooting green ink and there’s purple in the area, or any other colour, it’s a tell-tale sign Predator may be nearby, but be careful, turn your back for a second too long, trying to remove your opponent’s ink, they can pop out from behind you and it’s goodbye points.

But as fun as winning can be, just make sure you’re playing against a loser who can smile after constant defeat, after my fifth victory in a row, my challenger was ready to kill me and not just in the game and remember, gaming, it’s meant to be fun. Kill your opponent, but don’t kill the fun dude, Splatoon is a delightfully colourful game, like Epic Mickey, meets Predator, set in Super Mario Galaxy, that can be enjoyed by those of all ages to enjoy and play together.

So if you haven’t got it yet, do so, because even if you just played it for Battle Dojo, as opposed to the story and took advantage of its online features, it’s not the worst game with a singular function, to play over and over because two player really is a lot of fun, although I would say that, I won constantly but I still gladly await the joys of one player and will be sharing my thoughts of that, soon.