Bayonetta: The Original & The Best

(WARNING THE FOLLOWING PIECE PERTAINS TO A PARTICULAR GAME THAT IS HIGH IN SEXUAL NATURE, SO AS SUCH, IT POSSESSES SOME HUMOUR OF THE NATURE. THIS IS ABOUT THE UMBRAN WITCH BAYONETTA AFTER ALL)

Games, they always make a difference, especially when you have a really bad day at work and just want to go postal and kill all your co-workers but you can’t because it’s frowned upon and you know, “illegal.” Instead you go home and slay some fantastical beasts or decide a copy of people could really do without their brains so you head shot a couple of mo’ fo’s in whatever gun game of your choosing, but this isn’t the only type of difference games make, so this piece, is about Games in a series and today that game is the original and quite possibly, the best Bayonetta.

I got 2, I played 2 and I loved 2. May have formed a slight crush on the all-woman protagonist but she is something special, plus she reminds me of a spectacled, sexually playful brunette I knew some years ago, minus the posh accent though. So with the love I had for this series, I felt compelled to continue my relationship with Cereza but DAMN! Even after having played Bayonetta 2, I did not expect Bayonetta 1 to be, well super Awesome and far superior to its continuation. Don’t get me wrong, 2 had a good story, great game play and striking backgrounds, but 1 has pistol whipping, a very sex orientated torture scene for the First Sphere Seraphim Joy’s and a whole load of close-ups.

I’ve said all that and I have still yet to get to the story, allow me to get that. 500 years previously, two ancient clans were at war with one another, the Umbra Witches and the Lumen Sages, one clan dedicated to darkness and the other to light. Originally they respected one another and lived in peace, existing in a harmonious balance, until a sacred law was broken, a law that states no child could be born between members of each clan, but then one was. Rosa, an Umbra Witch conceived and birth a daughter she named Cereza, fathered by Balder, a Lumen Sage. Balder was exiled and Rosa was imprisoned, but the Umbra allowed her daughter to live, who went on to make a friend in Jeanne, the woman and witch, who would go on to stab her in her heart, beginning her 500 year-long slumber. The game begins with a prologue during the time the clans were at war, occurring before the whole friend stabbing friend bit.

Fast forward to modern day, we find ourselves at a cemetary where informant Enzo, is stood next to a nun, conducting a ceremony. Only the nun is Bayonetta, a witch who 20 years previously, woke up at the bottom of the lake and has no memories whatsoever of her past. However the funeral is a trap, one which a gang of Angels fall for and Bayonetta, armed with the guns supplied by Rodin, is easily able to take them out and trashes Enzo’s car in the process. It’s not long before she learns from her informant that the second “Eyes of the World” (Bayonetta already owns the first) is rumoured to have been located in Vigrid, the city of her origin, so at once she leaves for the European city and the real battles begin, especially when her past is revealed and daddy is all too happy to see her again. 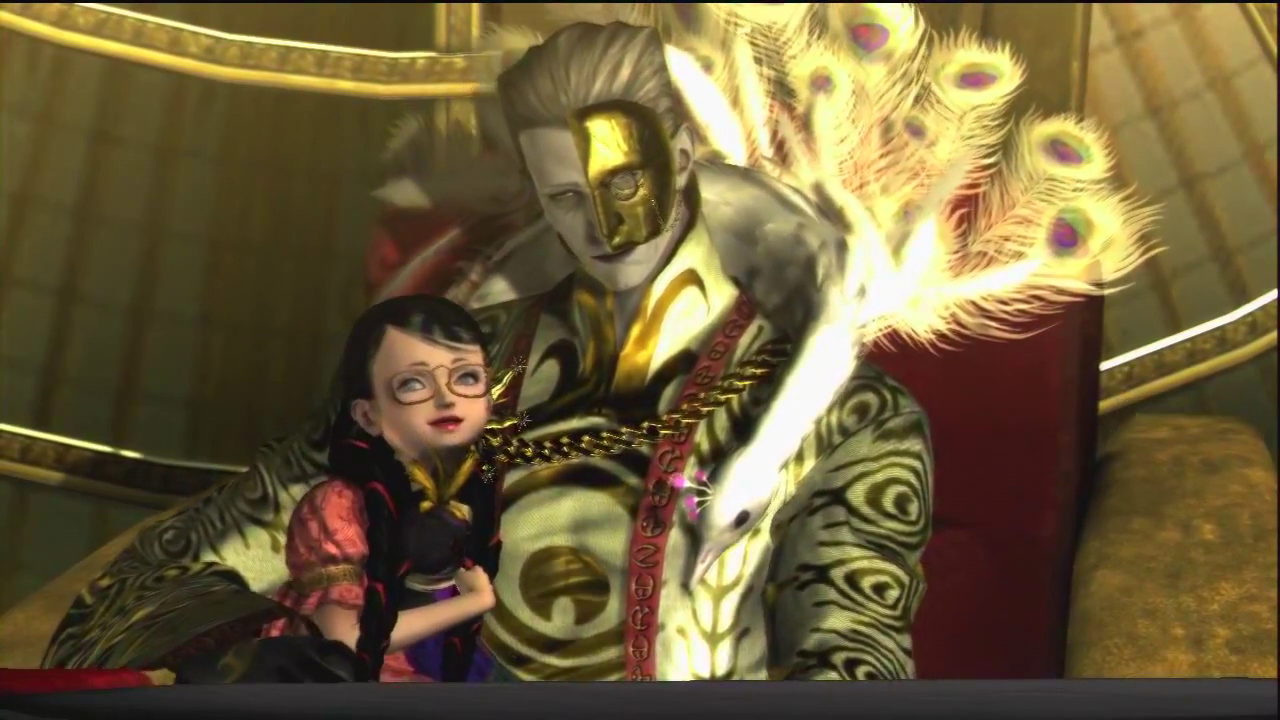 There is a great deal of difference between the two, you can tell where improvements have been made to the sequel, to better the series and give it more life, but you can also see where they have downplayed things, almost as if hordes of annoyed girlfriends and mothers all stormed into the game makers not-so secret “labs” and demanded certain actions to be taken, if the game developers desire to see the singular title become a series and honestly, I hope there are more Bayonetta games, but not if it means each one will become less so than its predecessor.

Sure the first one is full on, with a ton of great scenes, but in all honesty, it was those scenes that also made the game what it was, but also who the character really is, if you reduce it too much, well then you’re just changing the character entirely. Sure everyone has to grow up and mature a little, abide to the rules, but Bayonetta is so young, why not give her some more time to truly come into her own. To really take the gaming world full on and really show us what she’s got. I’m not suggesting she sheds the hair completely during the summons, just that this is a game that can become a franchise that can just keep going.

-The storyline draws you in, or at least Bayonetta’s charm does.

-The fight sequences are just great and they really complete the stunning backgrounds behind them. The combos alone are brilliant.

-Punching God into the sun.

-A thrilling experience is guaranteed and there are plenty of difficulty settings for gamers of all levels.

-Battling Angels whilst leaping from the roof of one vehicle to another, whilst speeding along a motorway and let’s not forget the motorbike gameplay either.

What cons? I couldn’t actually find anything wrong with this game whatsoever? Bayonetta on the Wii U is just outstandingly fantastic and is a game you can just play over and over again.

This really is a game where anything can happen and keep on happening purely because it can, so why change it, why stop it? Let’s just embrace it for the madness that it and she, is and take it from there. This game outshines it’s sequel in so many ways, just like Bayonetta 2 outclasses this one and so, Bayonetta finds herself walking in the same score shoes as she lands a well-earned 9.1/10.0 dead Angels.

We talk a lot about the future of gaming, well in my opinion, Bayonetta really is a great contender, and all I can say is I really hope there is a third instalment, because a trilogy is exactly what this game needs. If you haven’t played either game yet, seriously what the hell is wrong with you? Buy it and play it this instant.