In 2012, Nintendo Land saw its release and joining this game of games, was The Legend of Zelda Battle Quest and as I have already written, it does make for a good Zelda game, even though it isn’t Zelda. Hell I liked it so much, my review is solely based on Battle Quest, so let’s go. Zelda Battle Quest can be played with both the Wii U gamepad or the Wii remote plus. The reason for the two types of remotes is because there are two types of play, as an archer, in which the pad is used for. Or as a swordsman, in which, yep you guess it, the Wii remote is used for, delivering vital swings and Skyward Strikes. 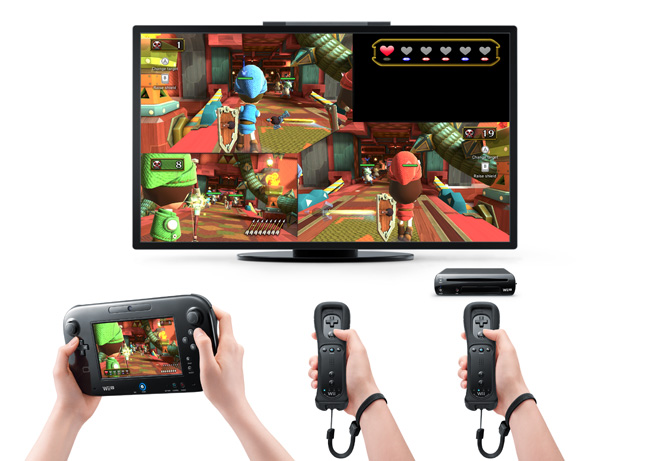 Not only is there a battle mode, which can be played Han Solo or with some off-line, in your very gaming room, friends. Then there is also a time attack mode with three of its very own levels, but sadly the use of swords are denied to us in this mode, as you can only play as a single green garbed, archer Mii Link, as you have to take out 25 enemies on each level. As for the story-mode function, well the story is pretty much the same as any Zelda story, there is an evil in the land and you alone, or with friends, are the only hope of saving the world of Hyrule from the evil beast known as Ganon. There may be no Princess Zelda, but she’d have only been a distracting here and the story worked well without her.

Oh and I should probably mention, whether playing alone, or with friends, you all share hearts, so if one of you get hit, that’s one less heart for all of you reducing your full six to five and when the lives tick to zero, it is game over, mission failed. There is also is the fact that when playing with friends, one of you will always have to be an archer, with the other or others, being swordsman and admittedly they will be seeing a lot of the action, but the archer is a key player in helping to get past the puzzles and providing vital back-up such as taking out enemy archers when are letting arrows fly at your companions, and if you are as skilled with a video game bow as Legolas is with a real one, well you actually stands a chance of earning more rupees and killing more enemies than your swordsman buddies.

Story-mode presents the gamer with nine stages, but in order to play them, you have to complete its predecessor level, but upon making it to that dreaded stage 9, Raid on Ganon’s Castle where upon reaching the end, a boss battle with Ganon himself awaits you. Succeed in the battle and the Triforce is yours and unlocking Battle Quest’s very own master quest mode, Advanced Quest and just what does AQ offer, why only another 5 stages to be completed, with an Armoured Ganon waiting to fight you once more, but know this hero, should your efforts prove fruitful and victory is yours, you like the Links before you have saved Hyrule once more and the Triforce is truly save once more and it is all yours.

Other great enemies making it into the game, which you’ll no doubt recognise are: Chuchus, Keese, Skulltula, Stalfos, with the likes of Shield Moblin, Big Moblin and Wizzrobe taking up the role as end level boss, or bosses in some stages, as well as a few others. Now what about the stages themselves? What locations do we get to see and wage battle on? Well there is the Lost Woods, Grassland Temple, Death Mountain Climb, Gerudo Fortress Trail, Sacred Grove and even Ganon’s Castle and thats just half of the fourteen stages.

Something else that makes this pretty freaking special is the fact instead of toon animation, 3D, or anything ever that we have already seen for a Zelda game, is the fact is has a complete new look, one that used a fabric aesthtic, which not only concerns the player but the world as well, the Great Deku Tree, in my opinion, has never looked greater and even when sew, Ganin is still pretty fierce. What’s more is the fact that because of this look, both enemies and players actually show their recieved damge by incorporating tears in the fabric, which has white stuffing tried tying to get out, being held in by a handful of stitches and that alone is sheer creative brillance and a testament as to how well thought out the creation of this attraction of Nintendo Land was and the same can be said for the other attractions involved.

I love this mini-game, I really do, almost as much as I love Pokemon Rumble, so enough talk, let’s get to the Pros & Cons:

-The Woolly look is perfection served up on a hot plate.

-You can play it in the comfort of your own home, alone or with some pretty great friends, which is one of two factors that make it a pretty great party game.

-The levels are long enough to be engaging, but short enough to replay over and over, meaning you can pick it up and leave it whenever you want, which is reason two why this is a great mini game.

-It has Legend of the Zelda in the title and it captures some of the gaming elements perfectly.

-It has an achievement system of stamps and Master rank waiting to be achieved, which ensures replaying previously beaten levels.

-I honestly would have preferred to have seen this game released as a standalone non-canon title, with more levels and monsters to battle against.

-Would have preferred some free movement, actually being able to control where the player goes, so that for one you can take in some of the scenery and two, to make the fighting a little more interesting.

And now, it is that time again, so without further ado, I can confirm that Nintendo Land‘s Battle Quest boasts a proud 8.8/10.0 defeated shield moblins, so if you are fixing to play a Zelda game you haven’t yet and you have a Wii U, then you should give Battle Quest a try, after all the other games that are playable as attractions, they’re pretty freaking great too and it is a good party game, maybe even better than Mario Party 10 itself.

But as always, the thoughts and opinions expressed here are those of my own and it is encouraged for you to make your own.