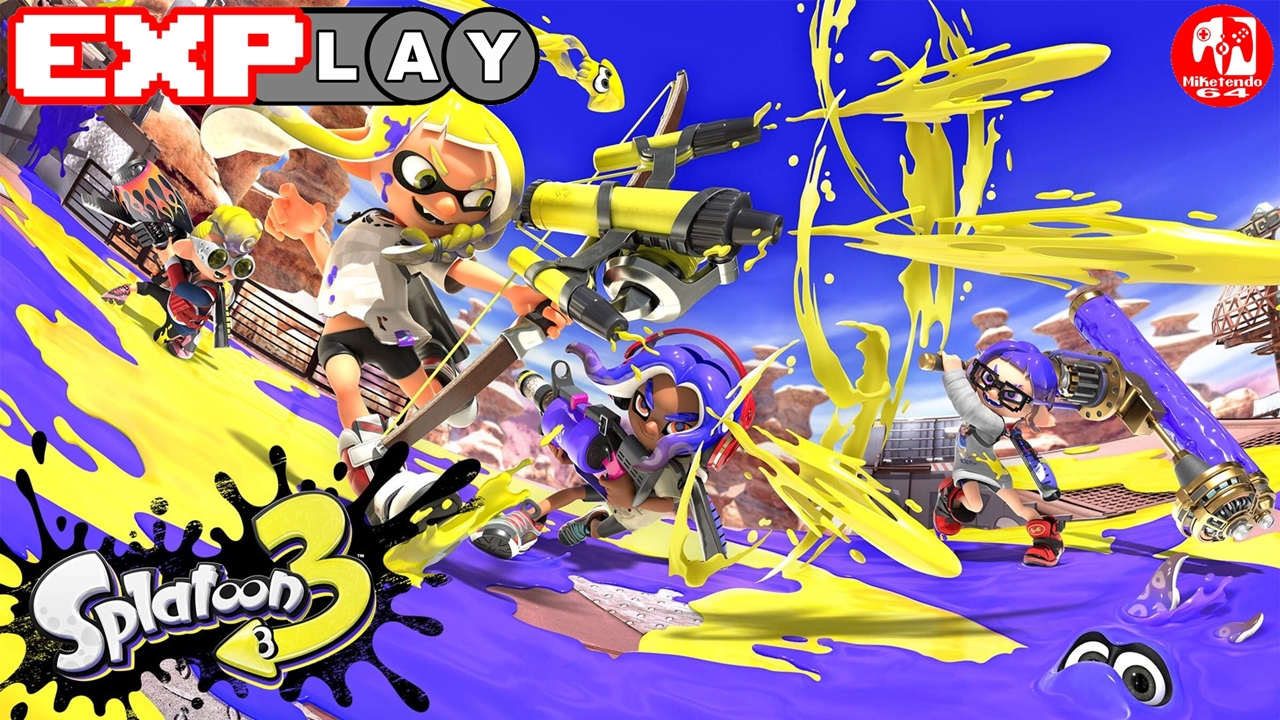 Welcome to EXPlay, (Explain & Play) the review series where we care not for scores but tell it how it is when it comes to every game we get our hands on, whilst also taking the time to include some lengthy gameplay, to give you the reader, the chance to shape your own impressions and views whilst watching and reading. In this installment, we’re covering Splatoon 3 by developer Nintendo.

Splatoon 3 is a third-person shooter game developed and published by Nintendo and as the name suggests, it is the third entry in the Splatoon series. When the first game Splatoon first launched on the Nintendo Wii U, it was a brand new IP that had released on a console that didn’t exactly have a high fanbase. However, it still managed to sell a respectable 4.95 million copies worldwide that warranted the game getting a sequel on the Nintendo Switch in 2017.

Thanks to the more successful launch of the Switch and the established fanbase of the first game, Splatoon 2 has managed to sell an incredible 13.30 million copies on Switch and now, five years after the release of the last game, we have an all-new entry in the series, also available on Nintendo Switch.

Splatoon 3, like the other entries in the series, has players controlling a Squid humanoid character called an Inkling that they can customize with clothing items as well as their hair style and eye/skin color. They aren’t the only playable avatars either as the Octolings have made a return too but you won’t have to play through an expansion pass to unlock them (like in Splatoon 2). Instead, they are available right from the start so you can choose to play as an Inkling or an Octoling from the get go.

The main premise of Splatoon 3 (and its predecessors), is to participate in online turf wars. Two teams of four players go up against each other and must use weapons filled with ink to claim as much turf as possible. This means spraying your ink over all applicable surfaces and reducing the opposing team’s turf by spraying over their ink with your own. For the most part, you will traverse the battle filled in humanoid form but you can also transform into squid form (or octopus form if you are an Octoling) and swim through your ink at a faster pace than you would running. You can also use squid form to go through wired fences or hide in the ink to ambush opposing players.

Although it is not the main objective of the game, you can splat players of the opposing team with your weapons. The ink of the opposing team is harmful to you as is your ink to the opposing team. Players who get splatted will return to the spawn zone and will rejoin the battle after a short cooldown. After the turf war comes to an end, the results are calculated and the team with the most turf will be crowned the winners. Win or lose, you will earn experience that will go towards levelling up your Freshness Level. which will allow you to unlock more weapons and gear that may have loadouts better suited to your playstyle. Rank battles also make a return but they have been retitled as “Anarchy Battles”. They still feature the same sub modes like Splat Zones and Tower Control but you can choose to play them singularly or take part in rounds of five for even more intense action.

As for the weapons themselves, many are series staples like the Aerospray MG, the Splattershot Jr, and Heavy Splatling but there are several new weapons like the Tri-Stinger which is a Bow and Arrow type weapon and the Splatana Wiper, which is like a sword. Each weapon has its own sup weapon and a Special weapon that you can use once you fill the special gauge up. New sub weapons and Specials are making their debut in Splatoon 3 with the Reefslider, Zipslider, Crab Tank and the Ink vac. Each offers a new way of turning the tides on the opposing team providing they are used wisely. The Reefslider for example, will have to ride an inflatable shark toy in one direction and by pressing ZR, it will stop and explode, splatting anything and anyone in its blast radius. This is great for large flat areas but quite ineffective in narrow spaces or areas with uneven terrain.

As for other game modes in Splatoon 3, Story Mode and Salmon Run also make a return. The story mode has the player join the New New Squidbeak Platoon (not a typo). Captain Cuttlefish enlists your help to take on a strange new threat and this time, DJ Octavio is not behind it. This new threat is hairy Octarians????!!! While the enemies may have changed somewhat, the mission remains the same: Venture through each level and reach the end, taking out any enemies and overcoming any obstacles in your path.

For those familiar with the general format of the Story Mode in previous games, you may be interested to know that there are some changes. Instead of the standard level progression of beating all levels in an area and then taking on a boss. You can simply make a beeline for the boss providing you have enough power eggs to defeat the Fuzzballs that will clear the fuzzy ink out of the way. They serve as paywalls so while you don’t have to play through every level in an area, you do have to play through enough in order to get the required amount of power eggs in order to progress onward. Another change is that the sea scrolls are no longer hidden in stages but all over each area instead. These can be hiding in plain sight and will reveal themselves when you hit a beeping red light on the ground. These lights don’t just reveal sea scrolls either. They can also reveal customization items for your locker (more on that later) Gold discs and power eggs.

Another returning game mode is Salmon Run. This co-operative online mode has a team of four players defend themselves against waves of fish-like enemies called Salmonids and collect Golden Eggs. The stage will alter somewhat as the water level rises and falls between each round and the Salmonids can come out of the water from any direction. Like with Turf War, you can increase your level (in this case “Professional Level”) which will allow you to get special gear and take on harder jobs with even more enemies per wave. Even though the standard number of waves per job is three, you can sometimes trigger an extra wave where you must work together to defeat the King Salmonid. They are exceptionally tough but fortunately, you won’t lose all your hard work if you all get wiped out.

Splatoon 3 also has a brand-new game mode called Table Turf. It is a card game against AI opponents where you must use the cards in your hand to “ink turf”. Just as in an actual Turf War, you must try to claim as many spaces on the grid as possible by using the cards in your deck. Each card you place must be adjacent to turf you have claimed and you can’t claim the opposition’s turf unless you have a special activated. It is certainly a curious minigame that requires more strategic thinking like that of chess than on the fly responses in the normal game modes.

I spoke briefly about customization items earlier when talking about the Story Mode. As is the staple in Splatoon games, you can customize your inkling with all sorts of gear like headwear, tops and footwear. Splatoon 3 takes customization to the next level and introduces lockers for you to decorate with gear you own and stickers and other items that you acquire in game. You can also edit your Splashtag which is a banner that presents your name and a title during online play and you can also select an emote that your character will act out upon winning a battle.

One last thing to touch upon is amiibo compatibility and Splatfests. Like in the other games, amiibo will unlock special gear for your Inkling or Octoling to wear in Turf Wars. Splatfests are special events where players duke it out by choosing sides in a particular theme, only this time there are three different teams to choose from. A new addition to Splatfests this time around are Tri Color Turf Wars where all three teams will compete against each other in 2v4v2 matches with the winning team at half time having four team mates and the other teams reduced to teams of two.

In comparison to its predecessor, Splatoon 3 doesn’t do much too much to improve the formula with much of the gameplay being exactly the same as in Splatoon 2. However, players may find themselves favoring new weapons over their staple favorites as the loadouts are much different between games. The new weapons types are a welcome addition and the Table Turf minigame is a fun addition that I do much prefer over the minigames in previous entries. Story Mode feels more fluid and players aren’t obligated to play through every level. Instead, players can decide for themselves to play through them all or just enough so they can get the required number of power eggs to clear their path of Fuzzballs and reach the next area.

For veteran players, Splatoon 3 will feel like a natural step forward for the series that feels very familiar but adds new features and adjustments to keep the game from feeling stale. New players on the other hand, may find themselves overwhelmed in the beginning as stumbling in to turf war to play online will have not yield promising results as you will very likely get owned by experienced players on the opposing team. Still, the option to play online and local wireless with friends along with the story mode, Salmon Run, and Tableturf Mode are still more than enjoyable and the skills you will pick up in story mode and Salmon Run will most definitely become helpful when you decide to take on Turf War again.

To round up, Splatoon 3 is Splatastic Fun to be had by all but turf war is no playground scrap. The different game modes will certainly give players plenty of alternatives should they tire of a particular game mode and want to try something different. For those that missed the boat on Splatoon 2, Splatoon 3 is what is fresh right now and in the world of Splatoon, being fresh is all that matters.