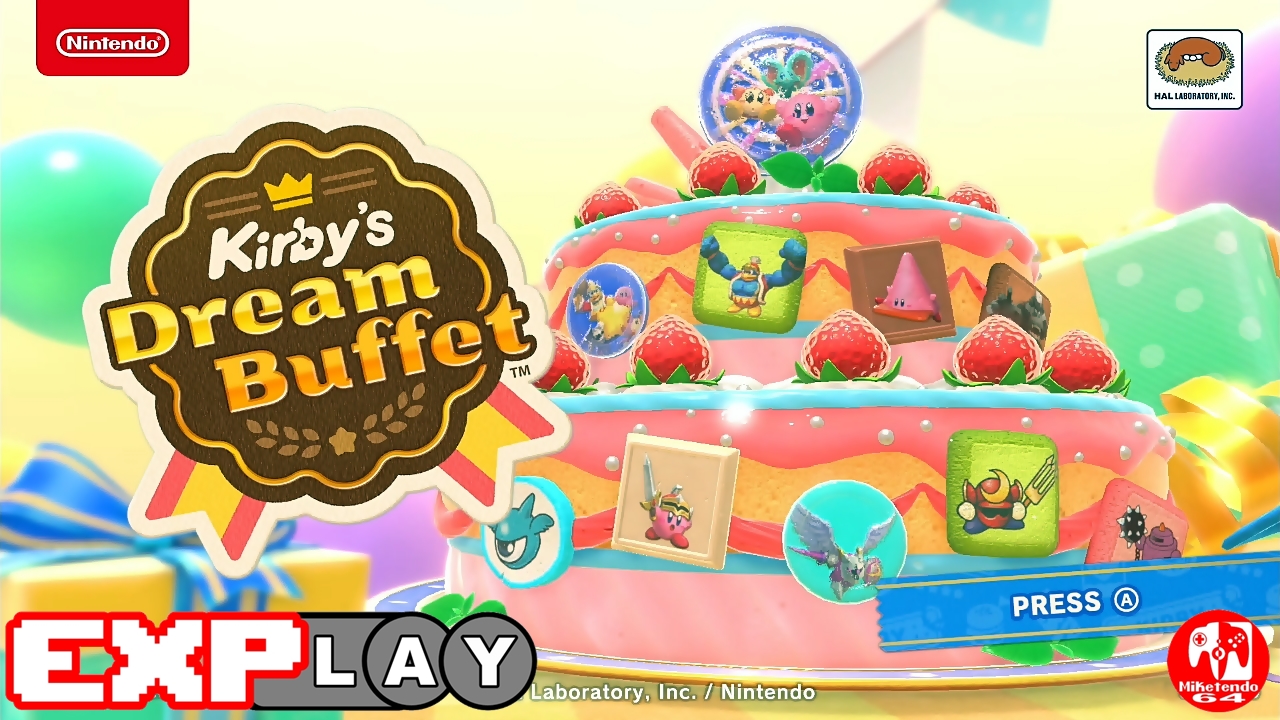 Welcome to EXPlay, (Explain & Play) the review series where we care not for scores but tell it how it is when it comes to every game we get our hands on, whilst also taking the time to include some lengthy gameplay, to give you the reader, the chance to shape your own impressions and views whilst watching and reading. In this installment, we’re covering Kirby’s Dream Buffet by developer HAL.

It was only a few months ago that Kirby had an incredible adventure in Kirby and the Forgotten Land but it looks like the loveable pink puff ball has worked up an appetite has they have a new party game called Kirby’s Dream Buffet. In this new outing, it is every Kirby for themselves as four players must eat up as many strawberries as they can with whoever eating the most being crowned the winner.

To give you an idea of what the gameplay for Kirby’s Dream Buffet is like, I would probably say it is like Fall Guys meets Super Monkey Ball. You play as the titular Kirby who must navigate their way through a series of delectable courses that are made entirely of food from sweet treats to fondue dishes and barbecues by rolling and jumping. Up to four players can play together online or via Local Wireless (each with their own console) or two players can play on a single console offline. CPU characters make up the rest of the roster to make it feel like there are more players in the game than there actually are.

The main game mode in Kirby’s Dream Buffet is Gourmet Grand Prix. It is made up of four rounds that consist of two Races, a Minigame, and Battle Royale to finish. The races are obstacle courses with many different obstacles, platforms and branching paths that have three strawberry mountains of varying sizes waiting at the end. The aim is to try and get to the end as quickly as possible whilst gobbling any strawberries in your path and eat the biggest strawberry mountain at the end. If you are beaten to the punch, you should then try to eat the next subsequently smaller mountain. Minigames are small arenas that task players to eat falling strawberries, break boxes and eat the strawberries contained inside or defeat enemies. The final round gives players one final chance to come out on top by spawning strawberries and item boxes so players can force one another out of the arena so they lose strawberries and claim what was lost for yourself.

At the end of the Gourmet Grand Prix, the results will be tallied up but not before bonus strawberries are given out for random reasons (kind of like the bonus stars in Mario Party games). This means that even if you think you are well in the running for first, you could still be bested by another player if they get all the bonuses. It really is anyone’s game in Kirby’s Dream Buffet so even if you have been falling behind throughout each round, there is still every opportunity for a comeback.

While the Gourmet Grand Prix does not take long in itself (with each one lasting around 5 minutes or so from start to finish), if you want to play any of the rounds singularly, you can quite easily offline on your own or with a friend. There is also the option of free rolling that lets you have free reign of special course that allows you to fine tune your skills without the hassle of competition.

A few paragraphs ago, I mentioned Item boxes. These can be found in any of stages in Kirby’s Dream Buffet and they can grant strawberries or food abilities. The food abilities grant Kirby temporary abilities like turning into jelly which can help him slide under cookie walls, doughnuts that turn Kirby into a wheel and give him extra speed, and even a cupcake that turns Kirby into a tornado that sucks everything up in proximity. There are several other abilities that Kirby can find including Chocolate (Stone), Chili Pepper (Fireball), Lollipop (Invincibility), and other foodstuffs that can grant Kirby a high jump, drill into the ground, or the needle ability.

Regardless of whether you win or lose in Kirby’s Dream Buffet, all the strawberries you have eaten will tally towards your Gourmet Rank. Levelling up this rank will reward you with items to customize your Kirby, to look like other characters from the Kirby series, like Meta Knight, Waddle Dee, King Dedede, and many others. You can also unlock new themes for races, minigames and Battle Royale arenas, not to mention soundtracks that will play in the background as you play through the game. You will also be given Character decorations that can be used to decorate the cake on the hub screen. It is also worth noting that whichever character decoration you put on top of the cake, will also appear as the base of your starting position in races.

All in all, Kirby’s Dream Buffet may not be the next big thing to rival other battle royale games or dethrone the likes of Fall Guys any time soon but it is well worth playing regardless. I had a lot of fun playing the game and leveling up my Kirby and unlocking outfits. Yeah, it might be $15 USD or so on the Nintendo Switch eShop but the way I see it, you will still get your money’s worth out of it. I mean, let’s look at pricing for Fall Guys for a moment. The game may be free to play but any of the costumes in game that players would really want cost like 1200 Show Bucks a pop, meaning you would need to spend money in order to get Show Bucks or grind away to get enough to purchase the outfit. The costumes in Kirby might only be Kirby series specific but you don’t need to spend any more money to obtain them.

There are some things that I would like to see added to the Kirby’s Dream Buffet. For example, I would like the option to be able to play online with two players on one console so my partner and I can play with our friends on another console, or the ability to play with more players online with hectic 8-player or 16-player matches. That aside, I do believe that the game as it stands is a very fun game and very accessible to both younger and older players alike. Younger players can also enjoy this game with more experienced players as the game constantly keeps itself balanced with the cookie walls acting as progress barriers, allowing players falling behind the opportunity to catch up, and also putting 3rd and 4th ranking players further ahead in the starting position of races to give them to possibility to turn it around and secure a win.

If you love Kirby games, or even if you don’t but do like party games, Kirby’s Dream Buffet is well worth the asking price. It is a lot of fun and if you are looking for something like Fall Guys but you actually have the chance of winning, then Kirby’s Fat Guys, uh, I mean Kirby’s Dream Buffet, is definitely one to add to the library.