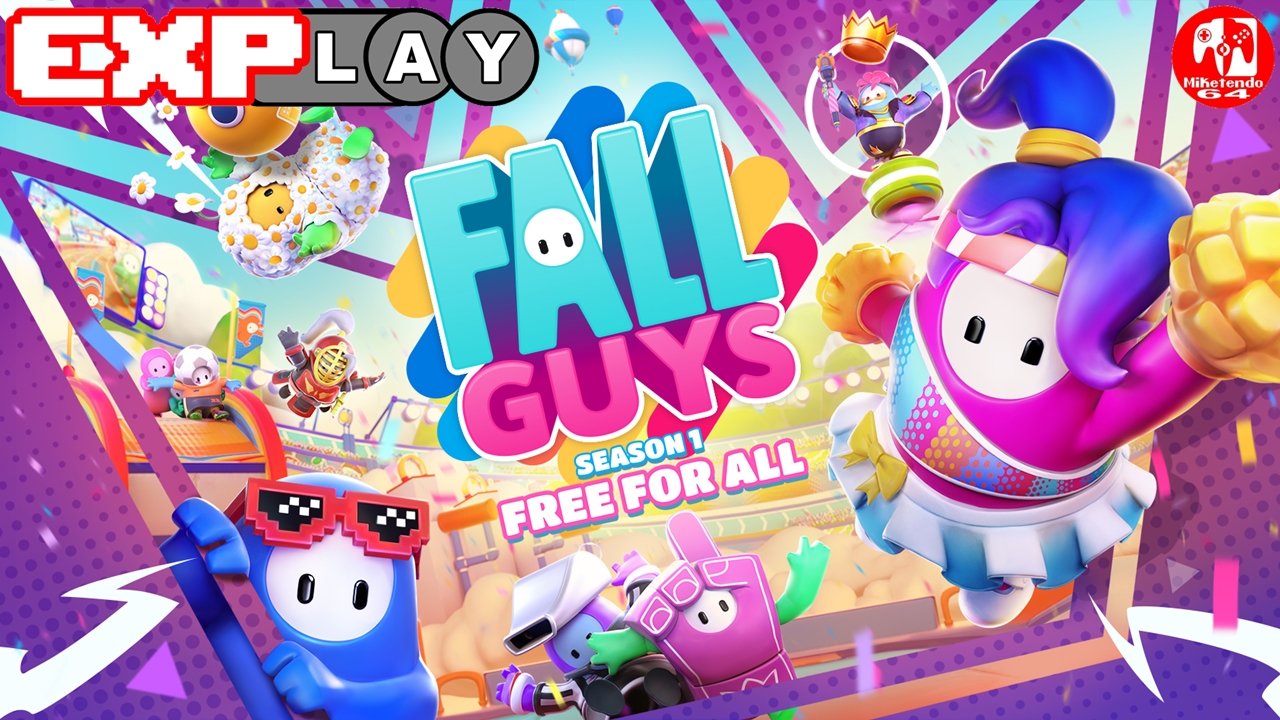 Welcome to EXPlay, (Explain & Play) the review series where we care not for scores but tell it how it is when it comes to every game we get our hands on, whilst also taking the time to include some lengthy gameplay, to give you the reader, the chance to shape your own impressions and views whilst watching and reading. In this installment, we’re covering Fall Guys by developer Mediatonic.

Fall Guys is a platform battle royale party game that came onto the scene back in August 2020. It is developed by Mediatonic and was published by Devolver Digital for Playstation 4 and Microsoft Windows. Later on, Epic Games acquired Mediatonic and the publishing rights to the Fall Guys IP. Roll on 2022 and Fall Guys has been made free-to-play on Nintendo Switch, Xbox One, Xbox One X/S, and Playstation 5 and supports cross-platform play.

In Fall Guys you control a bean-shaped character and participate in Shows. The Shows are made up of a series of rounds that take place on obstacle courses or have you compete in certain sports. You must navigate your way through each course and make it to the finish line or avoid falling into the slime to qualify for the next round. Obstacles can range from swinging hammers, seesaw platforms, rotating platforms, trapeze bars, fans, projectiles, fake doors, and more. Up to 60 players can play in a single show and after each round, that number will dwindle as those who didn’t make it will be disqualified but can still continue to watch the Show as a spectator.

The stages of each round are selected at random so you never know what might come next. Some stages will have some of their obstacles changed/altered so even a familiar course will feel slightly different and fresh. The final round is designed around a smaller group of participants and whoever is the last one standing will be deemed the winner. Depending on the game mode, you can earn a crown or crown pieces which when you collect enough will earn you some special rewards like customizable items for your bean.

Even if you don’t win, you can still gain experience and an in-game currency called Kudos. By gaining experience, you can level up to earn other customizable rewards and the Kudos can be used to buy certain items from the store, however, it isn’t the game’s only form of currency. Show Bucks is the other form which can be earned in small amounts as part of levelling up but can also be bought with real-world currency. The store has plenty of outfits for your bean character that require Show Bucks to purchase them and there are some pretty cool outfits on offer too. Unfortunately, they do seem to be rather on the steep side but if you are really enjoying the game and like the look of a particular outfit, you are probably going to buy it anyway.

So, moving on from the store and customization items, let’s talk about the controls. The controls are very simple for Fall Guys. You can move your character with the left Joystick and operate the camera with the right. The B button is to jump, Y is to dive which can come in handy to make further distances (not too far mind), and the ZR button is to grab onto things so you can pull yourself up platforms or hinder another player and slow them down. If you are not happy with the control bindings, you can change them to fit your particular playstyle.

While only one player can play Fall Guys on a single system, you can team with your friends in groups of four across multiple platforms so you are not restricted to everyone playing on just a Nintendo Switch console if you have a friend who only has an Xbox Series X, or PS4. With your party, you can participate in shows together and work together as a team in Squad Goals, battle it out in Solo or participate in the special shows that get changed frequently, constantly adding to the variety. If there are only two of you or you are on your own, you can also play Duo Shows that have players team up in pairs. Should you get fed up with getting your butt handed to you by a bunch of randoms, you can host or join custom shows by using a room code and play with your friends and people you know instead. Up to 60 players can join a custom game with the minimum requirement set at 10 so if you have enough people to play with, you can enjoy playing Fall Guys that way instead.

Fall Guys is a game I have been wanting to come to Switch since it was announced. The whole chaotic platforming battle royale appeal just seems to be such a perfect fit on Switch. I have played this game alone, with my sister and her partner, with my partner, and with MYT of The Elite Institute and their partner and even though we have been up against so truly formidable opponents, it has still been a blast to play and it is a game I will keep coming back to again and again!