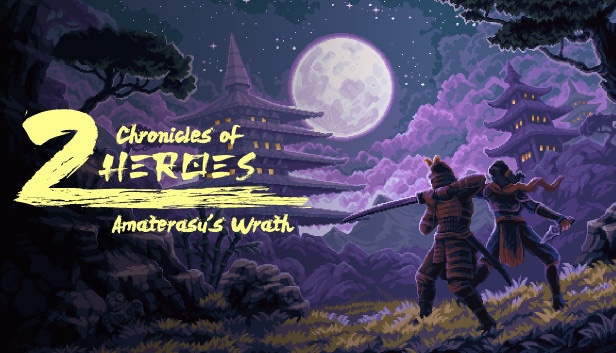 For anyone who was interested in Infinity Experience’s Chronicles of 2 Heroes, the platformer has successfully met its crowdfunding goals on Kickstarter and will grace all platforms later this year.

What’s more, a physical release for the likes of PlayStation 5 and Nintendo Switch is in the works, along with a demo available on Steam. For the full announcement of today’s news, we have it here:

Chronicles of 2 Heroes has successfully concluded its Kickstarter campaign. Published by Catness Games, this retro platformer has raised close to 34,000 euros, well above the 10,000 euros set as the initial goal. Thanks to that massive support, it’s gorgeous pixel art will shine on all platforms by late 2022. Don’t forget the physical and collector’s editions for PS4, PS5 and Switch!

This Italian retro platformer by Infinity Experience stands out for its main mechanic: switching between the protagonists in real-time! Kensei is a samurai unable to jump but lethal in close combat. Ayame, on the other hand, is as agile as fragile. Both siblings have different combat styles and more than 20 abilities to unlock. You must combine their power if you want to save feudal Japan from Amaterasu’s wrath and her army of fearsome yokai.

Once the campaign it’s over and thanks to 608 backers, Chronicles of 2 Heroes will add a lot of extras. For example, a physical and a collector’s edition for PS4, PS5 and Nintendo Switch in collaboration with Tesura Games. A boss rush mode has also been confirmed, so you will fight consecutively against huge bosses like Gashadokuro, Nobumasa and Tengu. You can find more details about the stretch goals achieved right here.

Chronicles of 2 Heroes has a demo on Steam, where you also can wishlist it. If you have backed the project on the eligible tiers, you will soon receive access to an Early Access beta. Don’t miss anything about the project by following Infinity Experience on Twitter and join their Discord community.