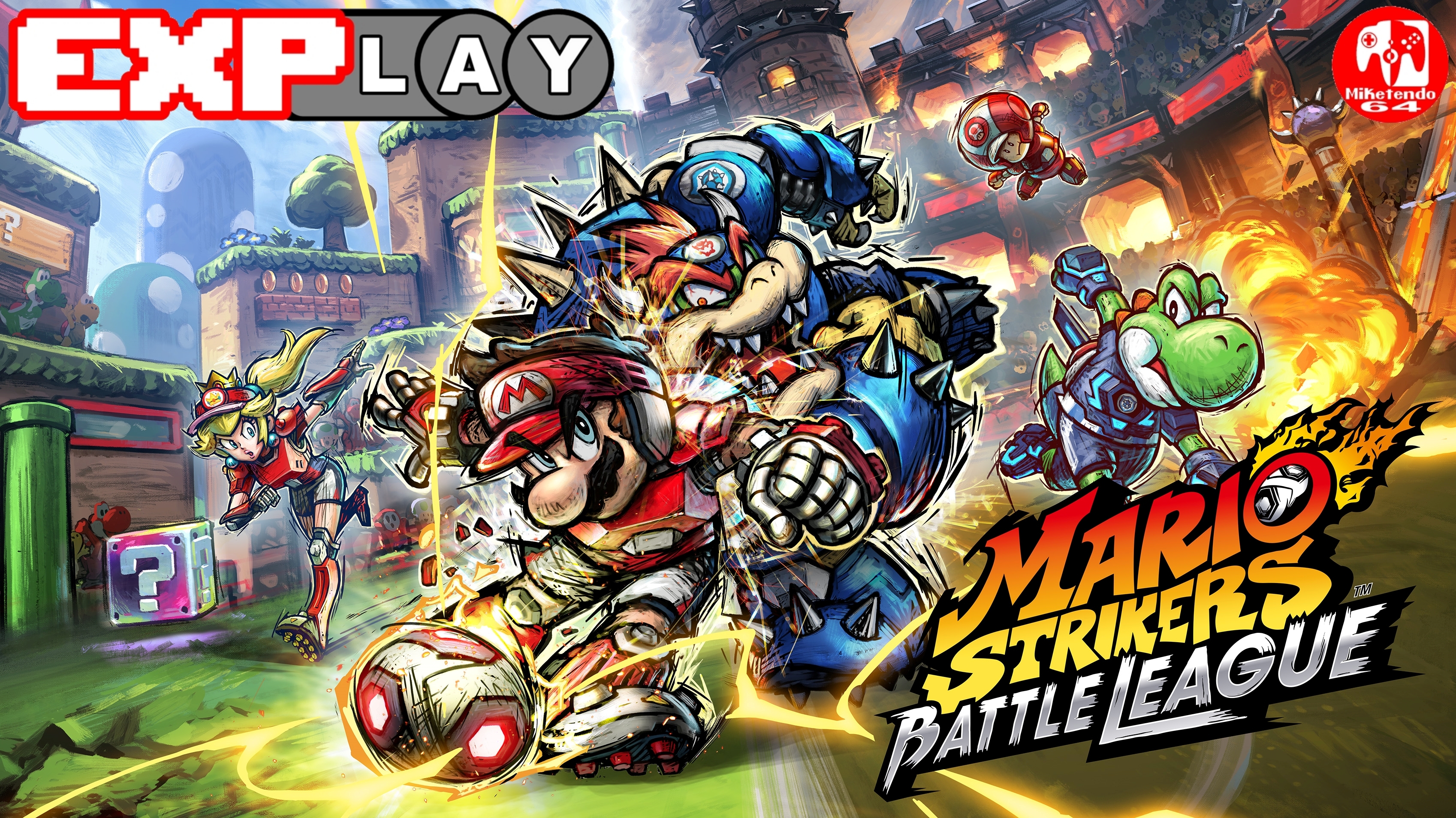 Welcome to EXPlay, (Explain & Play) the review series where we care not for scores but tell it how it is when it comes to every game we get our hands on, whilst also taking the time to include some lengthy gameplay, to give you the reader, the chance to shape your own impressions and views whilst watching and reading. In this instalment, we’re covering Mario Strikers: Battle League (aka Mario Strikers: Battle League Football as it’s known as in Europe) by developers, Next Level Games.

After the commercial failure of the Nintendo Wii U and lack of a Mario Strikers sequel, dreams of seeing the beloved series return to life were swiftly becoming diminished, but for those who maintained hope, your faith has paid off. Mario Strikers is back with a brand-new instalment and with Next Level Games in the driving seat, it’s finally time to see if the wait was worth it.

Mario Strikers Battle League is a five-a-side football game where you can take control of any four players on the field and a CPU goalkeeper. As with all football games, the objective is to win by kicking the ball into the other side’s goal. The team with the most goals at the end of the match wins. That is where the similarities end with conventional Football games as Mario Strikers Battle League encourages players to play dirty and use items to their advantage in order to seize victory.

Players can pass and lob the ball to one another and shoot when they reach the opposing team’s side. When players are not in possession of the ball, they can tackle the other players and not just the one player who directly has the ball. Anything goes in this game so don’t worry about getting a yellow card for smashing Wario into the electric barrier for the upteenth time because there are no yellow cards or even red cards for that matter.

While the likes of FIFA or Pro Evolution Soccer may feature the more traditional way of playing football, Mario Strikers: Battle League likes to mix things up Mario Style by throwing in item power ups like shells, bob-ombs, bananas and super shrooms to help players get the edge. Players can also perform unique shots called hyper strikes. By collecting the lightning orb, players will get a glow around them, which when they hold the A button down in the opponent’s side of the pitch, will be able to administer a hyper strike. A gauge will appear that has required the player to get the marker within the blue chevrons in order to successfully pull off a perfect hyper strike. Doing so will instantly sink the ball into the back of the net and can net your team two points.

Unlike other recent sports related Mario games for Switch, (Mario Tennis Aces and Mario Golf: Super Rush), Mario Strikers: Battle League does not feature a main story for players to experience. Instead, the game offers a single player experience, comprised of one main mode, Cup Battles. With Cup Battles, players can undertake a series of tournament-based battles. To win each cup, players need only to win three matches, to come out on top. Should you lose, don’t fret too much as you’re given a second chance to try and win thanks to a double elimination system.

Incidentally, not all cups play out the same way as each cup has a specialized focus, which basically means how the opposing teams play, is based on the cup you have chosen. In the Cannon Cup, opposing teams will prioritize shooting, whereas the Muscle Cup has a preference on Strength (harder to tackle enemies) and Trick Cup has a focus on technique. The first time you win a cup, players can earn 400 coins for themselves, a very useful in-game currency used for purchasing Gear.

Every other time you clear a cup you have already beaten; however, you will only be able to acquire 50 coins. Incidentally, players will not have to go it alone should the other teams prove too challenging, as you can be joined by up to three friends, all playing on the same console. Another main mode utilized in Mario Strikers: Battle League is Quick Battle. With this feature, players can choose to play on a single console, via local wireless, or play online against others. Depending on how you wish to battle, there comes a new host of options to choose from.

With Single Console, you can alter CPU character’s skill level, the length of the match, enable or disable items and Hyper Strikes or just alter day and night settings. Whereas with Online Play, you then have the option to play against anyone, join your friends who are already online playing, or battle your friends. Whatever you choose though, as with any online experience, the better and stronger your internet connection, the better of an experience you will have. With a poor connection, some lag is expected and matchmaking length time can vary.

The third main component of Mario Strikers: Battle League’s content is Strikers Club. Whilst there are currently no active seasons just yet, with this mode, players are free to create their own squad, or join one of the others that have already been created. It is with this function that Mario Strikers: Battle League might prove to be the most compelling, as diehard football fans and anyone who’s competitive, might literally play this mode to death, what with division rankings, club management and season achievements.

As for the game’s fourth main feature, we have Gear Settings. With Gear Settings, players are free to spend their hard-won coins on stat boosting gear that can be worn by your favourite players, on their heads, arms, body and legs. Be warned, however, for every stat they boost, they also reduce one of your other character’s five stats (Strength, Speed, Shooting, Passing and Technique). The “win some and lose some” approach to stats might prove to be an annoyance to some, but at the same time, it certainly helps to keep things fair, whilst also making for an interesting customizable experience.

Each character has the same number of stat points but are differently distributed. Mario and Luigi are your well-rounded players with no real stats out performing any of the others. Donkey Kong and Bowser are real powerhouses that rely on brute strength but are slow in comparison but are harder to take down with a simple tackle. The likes of Peach and Toad are quick on their feet but lack any real shooting power or strength. By tinkering around with gear for each character, you can adjust their stats in a way that will make them much more formidable on the pitch.

Outside of the four main features, of course, the biggest component of Mario Strikers: Battle Leage, is of course the gameplay. In the latest Mario sports game where anything goes on the pitch, Mario Strikers: Battle Leage offers two distinct play styles. The first is a casual experience where players need only to really focus on passing, shooting and tackling, but for the pro experience, get ready to throw down.

From powered up tackles to powerful shots and Hyper Strikes, which are worth two goals should they strike the back of the net, anything and everything goes. Even the use of items is permitted. From throwing shells, using mushrooms for a helpful boost, planting bananas, throwing bombs are just going invincible with a Super Star, there is only one rule to abide by and that’s win.

In terms of the game’s roster, we apologize for the lack of Daisy, but until the post release content that’s already been revealed starts being distributed, Mario Strikers: Battle League only has 10 playable characters. Mario and Bowser are the most obvious, but then they are joined by Luigi, Peach, Rosalina, Toad, Yoshi, Donkey Kong, Wario and Waluigi. There is also a limited number of stadiums to choose between, which is a shame, but there can be no denying how great the game’s many animations are. From the opening cutscene, to every goal scored by every character to the expressions of frustrated Mario characters, every scene is a true work of art.

Having already worked on the sublimely stunning Luigi’s Mansion 3 for Nintendo Switch, Next Level Games have created some truly incredible animations for Mario Strikers: Battle League. We might get bored to death of them eventually, resulting in skipping the highlights in order to speed up matches at some point, but with compelling gameplay, fast-paced actions and imagery that is to die for, it all helps make up for Mario Strikers: Battle League’s current line-up of content and characters.