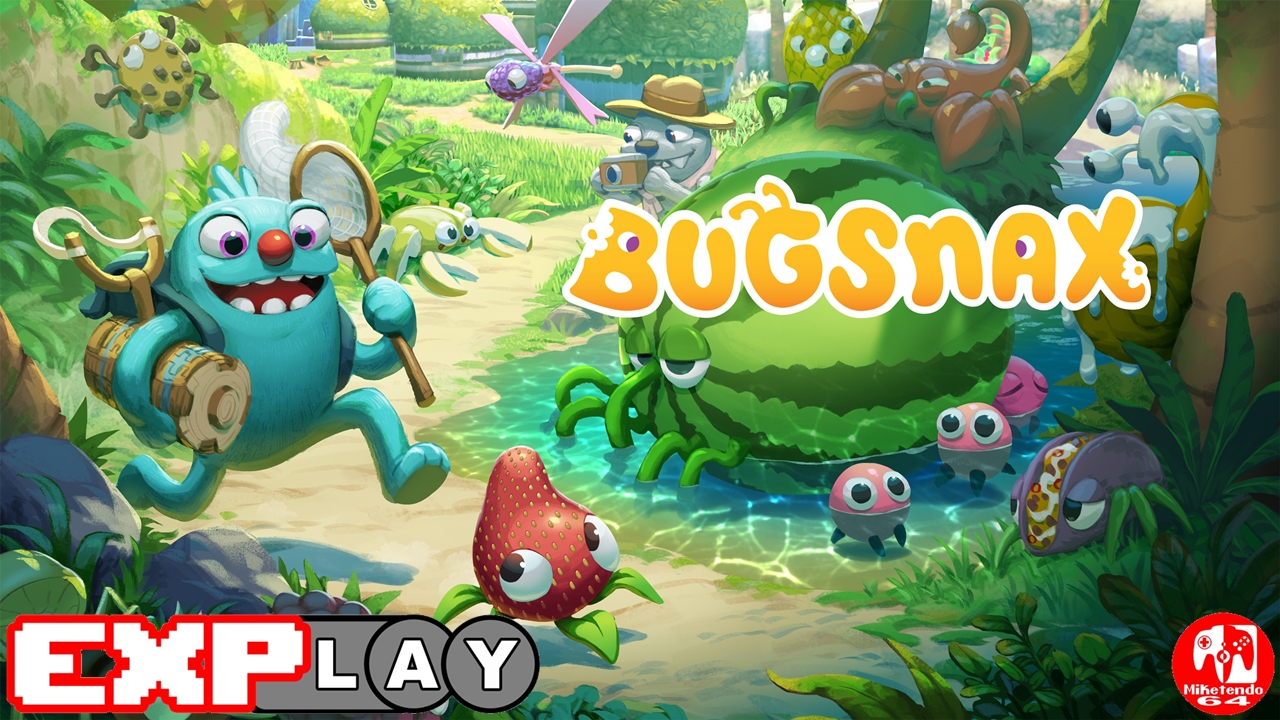 Welcome to EXPlay, (Explain & Play) the review series where we care not for scores but tell it how it is when it comes to every game we get our hands on, whilst also taking the time to include some lengthy gameplay, to give you the reader, the chance to shape your own impressions and views whilst watching and reading. In this installment, we’re covering Bugsnax by developer Young Horses.

Bugsnax came out on Playstation in 2020 as a PS4/5 exclusive. In April of 2022, the game reaches a whole new set of playable devices adding PC/Mac ports, Xbox Game Pass, and the Nintendo Switch.

I’ll get straight to it then and let you know that the Nintendo Switch version retains the core gameplay of the PS4/5 game, though with a noticeable graphical downgrade to make the vibrant world and wildlife work on the House of Mario’s handheld/console hybrid. There is a lot going on in the world of Bugsnax from the namesake creatures that flutter, crawl, roll, and putz about the landscape, to a variety of dozens of monstrous-looking Grumpus. Due to the Switch’s hardware, there were many instances of long load times between areas, pop-in that was jarring though kind of fit with the game’s more character-driven and fantastical animal designs.

The title’s creatures, Bugsnax, are a variety of amalgamations of real-world animals and your favorite snack food combined. These creatures are reminiscent of the Pokémon and Bugsnax shares a lot in common with the Pokémon Snap franchise. When you first encounter a new area of the map you will want to equip your scanning devices and learn the likes/dislikes of the Bugsnax you see, as well as their movement patterns (noted by directional purple arrows on the ground, in the air, or in the water).

Bugsnax also has a light Metroidvania puzzle-solving and world-opening dynamic that sees your map expand to a variety of areas while also filing out your tools in which you can catch Bugsnax’s creatures. There are 100 creatures to capture, some requiring another Bugsnax or a certain condiment like ketchup, dressing, or chocolate sauce to lure into your trap or net. Other Bugsnax creatures I encountered in the early few areas of the game also required spraying one Bugsnax with ketchup or chocolate to entice another Bugsnax to attack it allowing me to snag it in my net.

Your early game tools include a trap that you can place on the ground in the path of an unsuspecting Bugsnax, a slingshot for flinging chocolate and ketchup, and a ball with a Bugsnax inside which rolls towards your laser pointer. The trap is reusable, making it easy to snare a Bugsnax by collecting them in your backpack. The slingshot can be used to bait Bugsnax out of bushes or attract a Bugsnax to ram into another and attack them. Once knocked out you can capture the comatose Bugsnax in your net. Lastly, in my early gameplay, I was able to acquire the Buggy Ball which is a hilarious use of a young Strabby sproutling that you guide with a laser pointer leading Bugsnax towards you or into your trap.

Along with the capturing gameplay element in Bugsnax, there is a story that unfolds revolving around a missing Grumpus named Lizbert who was on a research mission to discover all the Bugsnax. In the early part of the game, I met a farmer, the popular ‘Valley Girl’, a self-appointed Mayor, a rancher, and a superstar. Each character is fully-voiced and comes with its own set of missions. The missions tend to be a variety of puzzle-solving, Bugsnax searching or learning about their story and the others in the island village and why they like or don’t like them.

While all of these above-mentioned things are going on, Bugsnax also dives into some harder points of discussion like relationships and loss, working together for the community growth, and depression, among others. These topics are done well in their approach and offer just enough humor to keep most of the dialogue light-hearted throughout. Just note that some serious level of discussion may rise if you let younger gamers play along.

Bugsnax has all of the elements of a great story-based single-player game and shouldn’t be missed. While there are caveats to the design of the game to make it run on the Switch, the game is fun. The game is pretty linear in how you work through the campaign, but it’s the good kind of point a to point b narrative. If you have a Switch and want to play through a story that deals with unique gameplay and subject matter, I would wholeheartedly recommend getting Bugsnax.