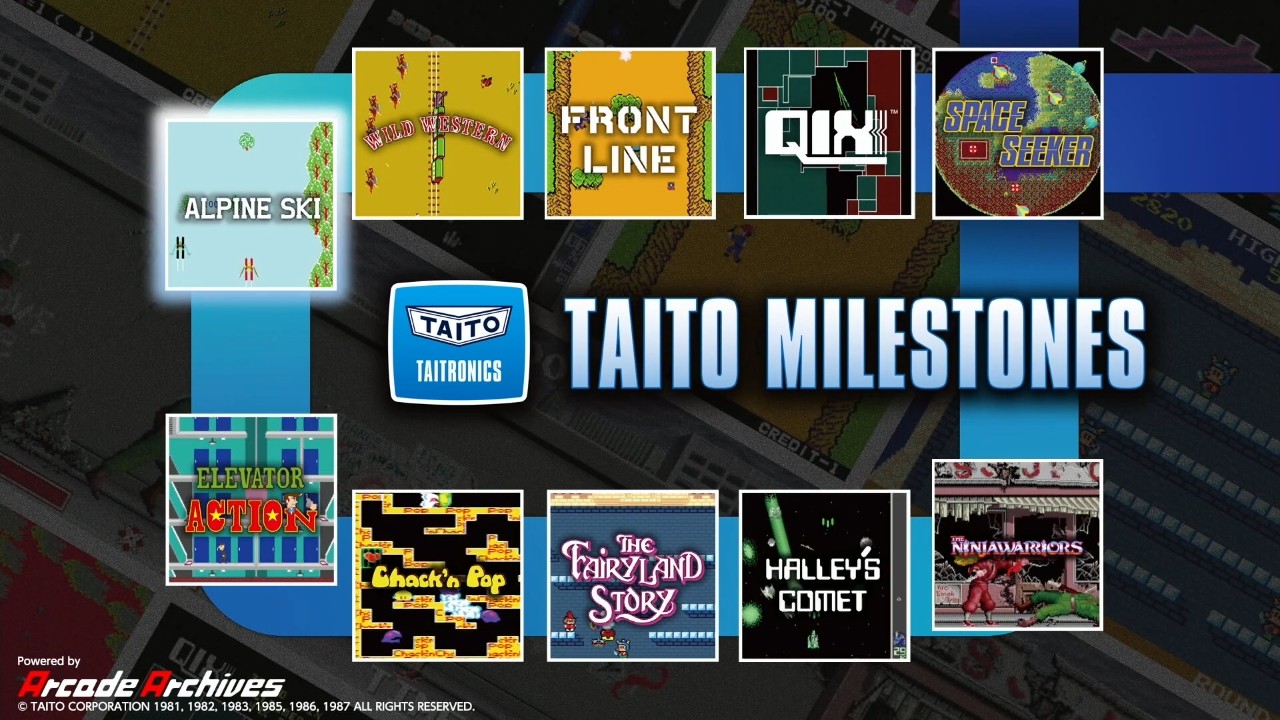 Welcome to EXPlay, (Explain & Play) the review series where we care not for scores but tell it how it is when it comes to every game we get our hands on, whilst also taking the time to include some lengthy gameplay, to give you the reader, the chance to shape your own impressions and views whilst watching and reading. In this installment, we’re covering TAITO Milestones by developers TAITO and HAMSTER Corporation.

TAITO Milestones is a collection of ten classic arcade games from TAITO. The versions included in the collection are developed by HAMSTER Corporation who are well known for their ARCADE ARCHIVES series that has more than 200 titles under its label.

When you start up each game. You will be shown a list of controls and their actions. This is quite handy as each game has different actions for each button and if you ever forget the controls, you can simply check them out at any time in-game by pressing + or -. You will then be taken to the main menu of the selected game where you must “Insert Credit” (by pressing L or SL) and then start the game by pressing R or SR.

All the games in the collection have their own unique style and art design. They are relatively simple to learn but will take a fair bit of skill to master. Such is the way for many classic arcade games. ALPINE SKI, for example, has a very simple principle of maneuvering between trees and avoiding obstacles in order to collect points. The difficulty comes from trying to make it between obstacles and getting wiped out by oversized hit boxes when your sprite is clearly not in contact with anything. A game that feels much more forgiving to play is NINJAWARRIOR. You have more chance to attack enemies before they can hurt you. However, you do have to react quickly as you can soon be swarmed by enemies and before you know it, it is game over.

As we round out this EXPlay, I will just say that TAITO Milestones is a niche market. By that I mean it may only really appeal to those who are fans of the classic arcade titles. The collection is nice to own but with most of these games available separately on Nintendo Switch already, it might be a little too late for those who may already own the games may not wish to double dip… on the digital release that is. The physical version of TAITO Milestones may entice players more so as it is to date, the only way to own these games physically on Nintendo Switch.

While not all of the games in the TAITO Milestones collection will appeal to everyone, there is a little something of each genre/sub-genre that may interest players to have a go at a few of them. There is your run and gun shooter, your arcade platformer, a beat ’em up brawler, and a puzzle game to name a few. If you enjoy classic retro games of yesteryear and would like to preserve a collection of TAITO arcade games for posterity, then perhaps TAITO Milestones might be one to interest you.