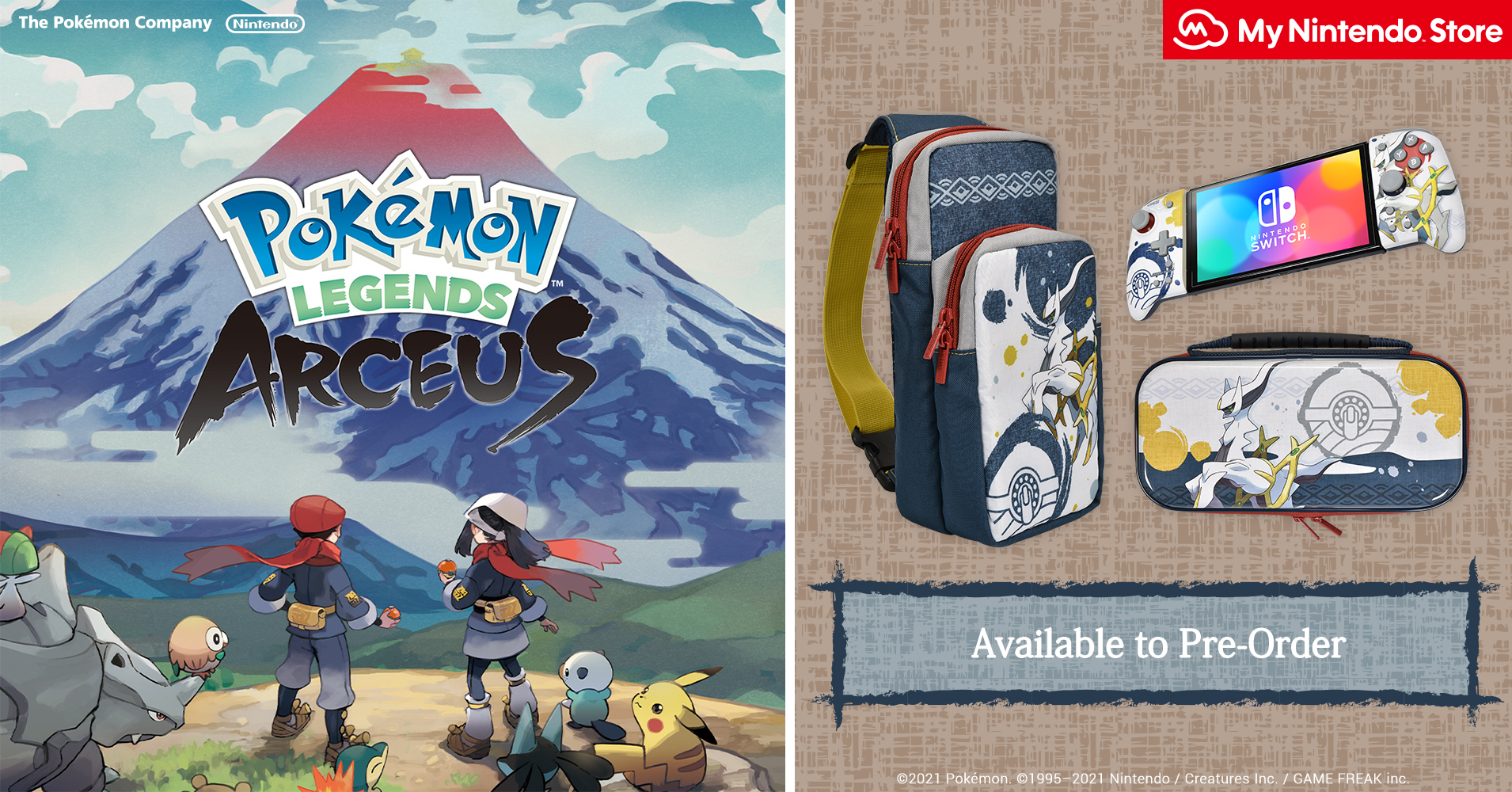 All things are coming up Arceus.

With just three weeks to go before the release of Pokémon Legends: Arceus, it’s understandable we would see promotions for the game ramp up and that’s precisely what is currently happening, in Japan mostly. Multiple commercials have been shared, with new gameplay being shown off and there’s even a new overview trailer that is only currently available in Japanese.

Yet, with the new videos, there’s also plenty of new screenshots to enjoy, an upcoming event for TETRIS 99 and brand new My Nintendo goodies to enjoy and we’re covering all of that, right here:

Only, this is not everything as Nintendo UK has also revealed that the My Nintendo store now includes brand-new Pokémon Legends: Arceus goodies, and we’ve got the details for each one here:

Get ready for a new kind of grand, Pokémon adventure in Pokémon™ Legends: Arceus, a brand-new game from Game Freak that blends action and exploration with the RPG roots of the Pokémon series. Embark on survey missions in the ancient Hisui region. Explore natural expanses to catch wild Pokémon by learning their behavior, sneaking up, and throwing a well-aimed Poké Ball™. You can also toss the Poké Ball containing your ally Pokémon near a wild Pokémon to seamlessly enter battle.

Travel to the Hisui region—the Sinnoh of old—and build the region’s first Pokédex – Your adventure takes place in the expansive natural majesty of the Hisui region, where you are tasked with studying Pokémon to complete the region’s first Pokédex. Mount Coronet rises from the center, surrounded on all sides by areas with distinct environments. In this era—long before the events of the Pokémon Brilliant Diamond and Pokémon Shining Pearl games—you can find newly discovered Pokémon like Wyrdeer, an evolution of Stantler, and new regional forms like Hisuian Growlithe, Hisuian Zorua, and Hisuian Zoroark! Along the way, uncover the mystery surrounding the Mythical Pokémon known as Arceus.

Preorder for a special in-game costume and download the digital version for Heavy Balls! – The Hisuian Growlithe Kimono Set and a Baneful Fox Mask will be gifted to early purchasers of the Pokémon Legends: Arceus game. You can receive it by choosing Get via internet in the Mystery Gifts* feature in your game, up until May 9th, 2022 at 4:59pm PT. Additionally, players who purchase and download the game before May 9th, 2022 at 4:59pm PT from Nintendo eShop will get an email with a code for 30 Heavy Balls which can be redeemed through the Mystery Gifts* feature until May 16th, 2022 at 4:59pm PT. Heavy Balls have a higher catch rate than regular Poké Balls, but you can’t throw them quite as far.

99 players…but only one will remain! TETRIS® 99 is the iconic puzzle game as you’ve never seen it before. Can you pick the right strategy to best 98 other players online* – all at the same time?!

TETRIS® 99 is available as an exclusive offer for members of the Nintendo Switch Online paid membership service. After all, TETRIS® 99 is all about battling online for Tetrimino-dropping dominance against players around the world!

Make smart use of Tetris™ Line Clears, K.O. the other 98 players and become the sole survivor!

The Basics – As various Tetriminos appear at the top of the screen, it’s up to you to guide them into place using the directional buttons and stop the Matrix from filling all the way to the top. Complete a row of blocks and the line will clear, earning you points. Clear four lines at once to achieve a ‘Tetris™ Line Clear’ – and if you pull off multiple Tetris™ Line Clears in a row, you’ll really rack up the points and put pressure on your foes!

Clear ’em Out – Whenever you clear two or more lines simultaneously, you’ll send Garbage Blocks at your opponents, filling up each player’s Matrix with difficult-to-clear obstructions. With 98 other players in each battle, you’ll be attacked with Garbage Blocks from all directions. Don’t get discouraged – strike back with attacks of your own by clearing lines!

You’ll be alerted before any Garbage Blocks arrive, and can even see how many lines are coming your way, giving you the chance to prepare yourself! Look out for warnings about incoming attacks, and change your approach at any time, using the right stick to choose which types of players to target with your own Garbage Blocks.

Game Plan – You might choose to go on the offensive against the current top players, focus on those that are nearly finished, counterattack to defend against players that are targeting you…or just send Garbage Blocks at random players! With the right strategy, anybody can come out on top! If you’re feeling especially confident, you can even manually target other players using the left stick.

As you play, you’ll swipe Badges from any players you K.O. The more Badges you have, the higher your attack power – and the more lines you’ll send to opponents at once!

Blocked in – You can always see how you stack up against the competition, as your own Matrix is surrounded by miniature versions of your opponents’ live screens! Don’t look at them for too long, though – keep your focus, and don’t stop clearing lines until all your opponents drop!

Statistically speaking – Outside of battle, you can check stats to see your K.O. count, tally up your T-Spins, and more. Win as much as you can, raise your player rank and boost your right to boast about your puzzle-solving skills!

How Eventful! – Special online timed events will be held in TETRIS® 99. If you come out on top of a match during one of these online events, you’ll be in with a chance of winning a prize.