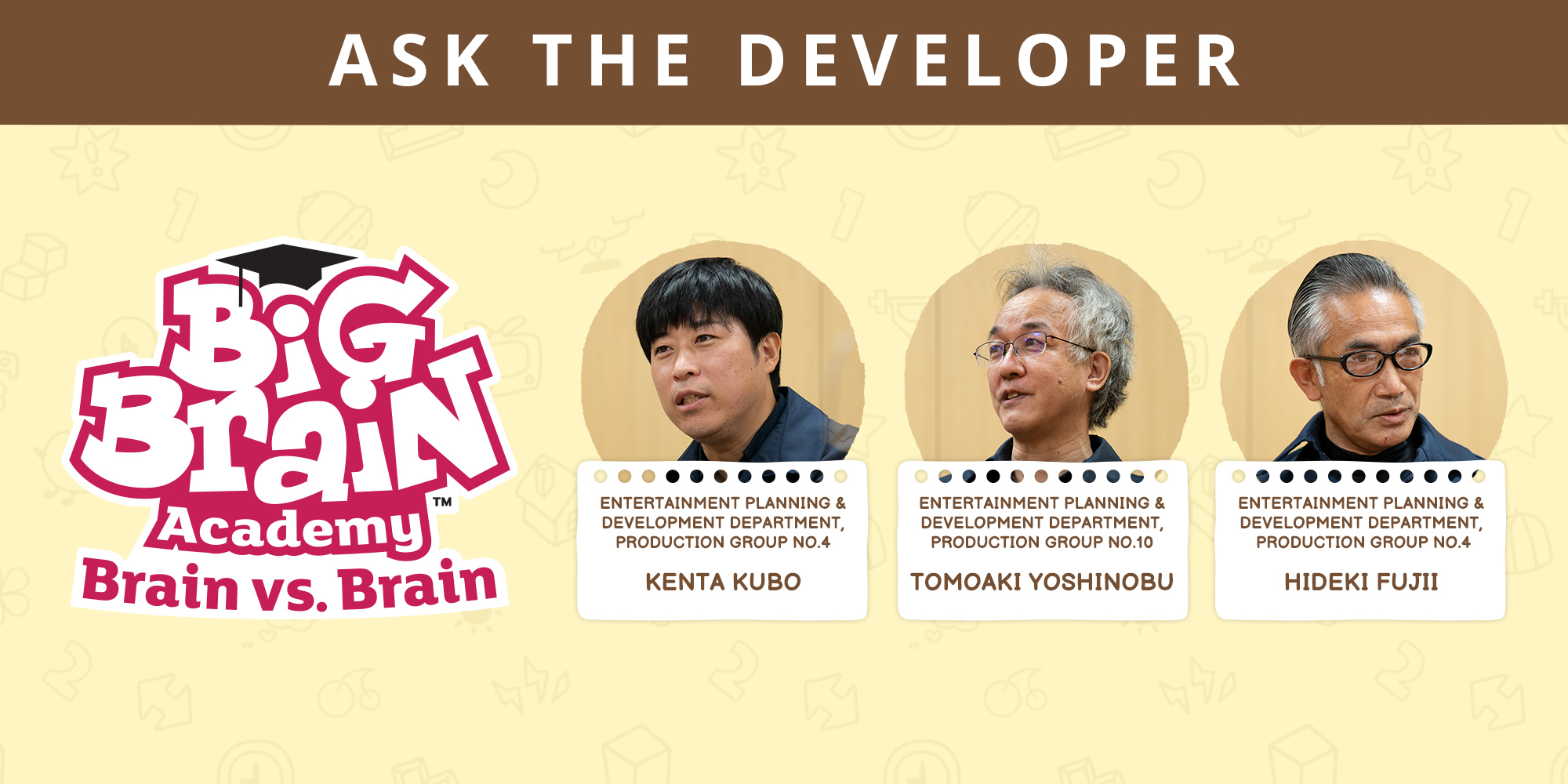 Nintendo has published a new Ask the Devs interview on their website. In part three of their series of interviews, Nintendo talk with some of the devs behind the Big Brain Academy series and the newest instalment Big Brain Academy: Brain Vs. Brain.

We have an excerpt of the interview below that contains the introduction of each developer and the conception of the Big Brain Academy series. For the full interview, check out the Nintendo UK website.

First, could I ask you to briefly introduce yourselves?

Kenta Kubo (referred to as Kubo from this point on):
I’m Kubo. I am the director for the Nintendo Switch game we are releasing now, which is called Big Brain Academy: Brain vs. Brain.

(1)Released in Europe on Nintendo DS in July 2006. This game let players enjoy a collection of minigames across five genres based on the theme “brain-bending activities”.

(2)Released in Europe on Wii in July 2007. This game let players enjoy a collection of minigames across five genres together with other people.

Hideki Fujii (referred to as Fujii from this point on):
I’m Fujii. I was also the planner and designer for the Nintendo DS and Wii versions of Big Brain Academy.

Thank you very much. In addition to Kubo-san, who is a developer for the new Nintendo Switch game, we’ve also invited Yoshinobu-san and Fujii-san. They weren’t involved with the development of the Nintendo Switch version, but they were developers for the Nintendo DS and Wii versions. This way, we can hear about all the games in the Big Brain Academy series as a whole.

Kubo:
Of course. Big Brain Academy: Brain vs. Brain is a minigame collection with activities for your brain covering five different genres: Identify, Memorize, Analyze, Compute, and Visualize. For the Nintendo Switch version of Big Brain Academy, we included a variety of activities from the Nintendo DS and Wii versions, plus some features exclusive to Nintendo Switch. There are two different modes: Solo and Party. In Solo, you can steadily work on activities by yourself, practising with 20 different minigames. In Party, you can have fun playing together with friends or family.The Big Brain Academy series started on Nintendo DS. Where did the idea for this game originally come from?

The Big Brain Academy series started on Nintendo DS. Where did the idea for this game originally come from?

Yoshinobu:
At the time, Iwata-san(3) was Nintendo’s president, and Nintendo’s global strategy was for Nintendo to expand the gaming population(4) by having people who don’t normally play games try them out. That was the company’s goal. We had time to ourselves to think, so I talked with Fujii-san about what we could do on the Nintendo DS.

(3)Satoru Iwata. Former President of Nintendo. Led the release of Nintendo DS and Wii, as well as development of Nintendo Switch. Worked to deliver Nintendo entertainment to as many people as possible. Made appearances in Nintendo Direct broadcasts and presented products and services “directly” to users. Passed away in 2015.

Fujii:
At this time when many people’s interests were moving away from games in Japan, a phenomenon called “Gamers’ Drift”, the strategy proposed games that could be enjoyed by anyone, regardless of age, gender, or gaming experience.

Around the same time, my child was studying for kindergarten entrance exams. After seeing my wife and child studying together for the exams at home, I started to have doubts about this kind of “parent and child” learning.

What do you mean by “doubts”?

Fujii:
I had doubts about this relationship in which parents were telling their children to do something, and the children feel they’re being made to do something, as a learning strategy. Then I saw this advertisement on a train for a cram school*, which showed an entrance-exam question for a junior high school. I tried to solve the question as a challenge for myself, and was shocked when I found I couldn’t.

*A place that provides private study lessons for children to prepare for entrance exams. Students usually take those lessons after school.

You thought you’d be able to solve the question, but you couldn’t.

Fujii:
Exactly. I felt a sense of panic about how dull my brain had become. And thinking about how I’d heard parents of children studying for exams saying things like, “Games aren’t beneficial for you” or “Games just get in the way of studying”, I thought maybe we could make a game that is both fun and beneficial and that parents would recommend to their children.I see. So your own environment and experiences led to the idea for the game. What happened after you had a vague idea of what you wanted?

I see. So your own environment and experiences led to the idea for the game. What happened after you had a vague idea of what you wanted?

Yoshinobu:
At the time, brain exercise(5)-type quiz games were a big trend. There were books and TV shows, and our child was also often doing them together with the elementary-school teacher. Even at home, my child would regularly play with these quizzes, asking whether we could solve this one or that. Seeing my child get so excited about them like this, I thought maybe this could be really popular. So when I heard the idea from Fujii-san, I immediately agreed.

(5) Puzzles that test your thinking ability and creativity. All kinds of TV shows and books came out after Akira Tago’s Atama no Taiso (Brain Exercises) book series became a hit in Japan.

Fujii:
However, we were unsure how far we could go into the educational aspect of the game while having it be fun at the same time. Our field is entertainment, and we don’t know much about education. So we went to educational events and facilities to do some field research.