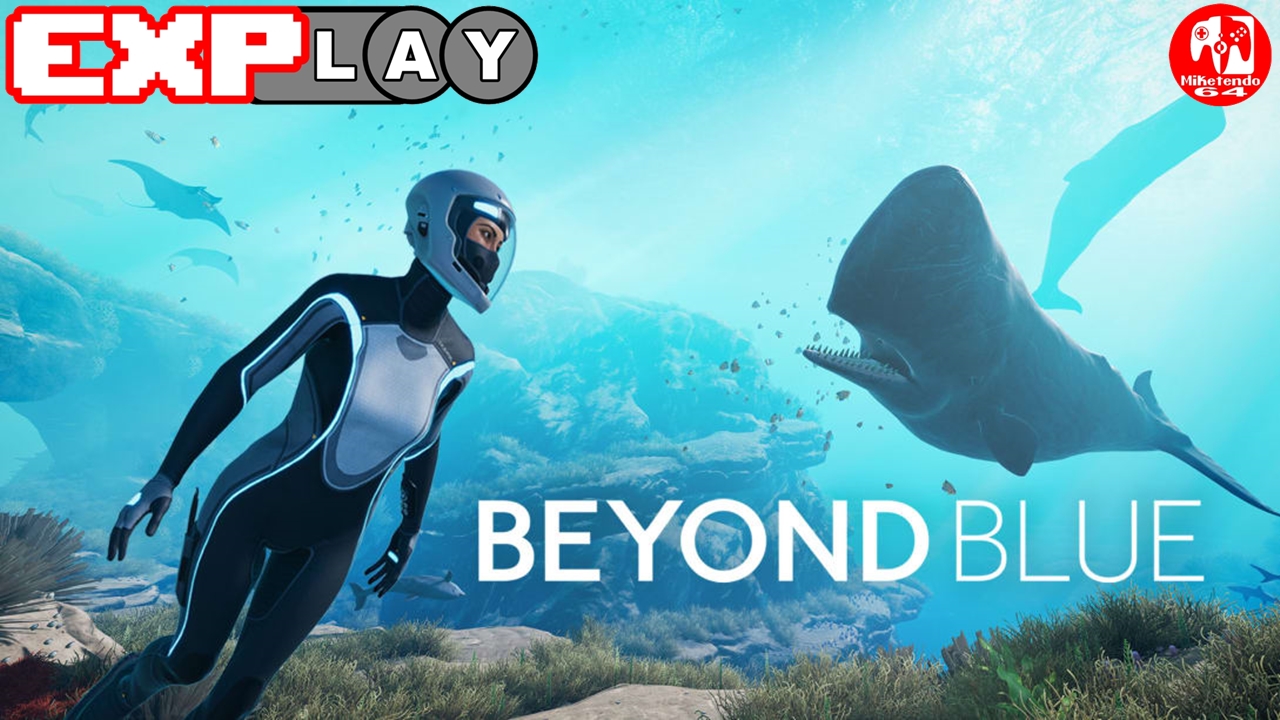 Welcome to EXPlay, (Explain & Play) the review series where we care not for scores but tell it how it is when it comes to every game we get our hands on, whilst also taking the time to include some lengthy gameplay, to give you the reader, the chance to shape your own impressions and views whilst watching and reading. In this installment, we’re covering Beyond Blue by developer E-Line Media.

Beyond Blue: (The Explanation)

When I first played Beyond Blue, it was at a demo booth at EGX London back in 2019. I fell in love with the game back then and have been waiting ever so impatiently for it to come to Nintendo Switch. I even checked in with the games Social Media manager on Twitter periodically to ask if there was any news on when the game was coming to Nintendo Switch. Alas, after a two year long wait, I can finally play the game on Switch and it was not a disappointment.

“What is Beyond Blue?” You may ask. Well, Beyond Blue is a third-person adventure game focused on underwater exploration. Set in the not-to-distant future, the player takes the role of an underwater researcher Dr. Mirai Soto, who, along with the help of her research team and the use of advanced technology, explores the aquatic realm to study whales and their habits.

As Mirai, the player will be tasked to dive several areas around the South China Sea from the warm tropical atolls to the dark abyss. Each dive site has its own ecosystem with several different species of marine life. The Atoll for example, is inhabited by vast quantities of reef fish, whereas in the depths, you will find the likes of the Anglerfish, Hagfish and even a Giant Squid.

Mirai’s main objective, and that of the player, is to find and study the whale population in the area. You will be tasked with navigating your way to marker bouys and using them to pinpoint the locations of whales in the area by the sounds that they make. Once you have found the locations of where the whales are likely to be, you must then swim to their location.

While the main story of Beyond Blue is mainly about the Sperm Whales, Mirai is also tasked with other objectives like finding missing or depleted sensors, taking bio samples and scanning certain marine creatures to help her colleagues on the surface, André and Irina, with their research. These side objectives, so to speak, are still part of the main story and the dive won’t end until all of the objectives have been met.

As for actually moving around in Beyond Blue, you can control the direction Mirai swims by moving the left Joystick. Up, is forward, Left turns Mirai left, and Right turns Mirai right. The ZL and ZR buttons are used to make Mirai ascend (ZR) or descend (ZL). The right joystick controls the camera angle for the most part but can also be used to make Mirai ascend, descend or turn depending on the angle of the camera.

Mirai’s suit is made of some state-of-the-art next generation technology. It has lighting that runs along the outside of the suit and the colors it can emit are blue (white light), UV (purple), and red. The lighting on the suit can be changed by pressing the X button and can also be turned off completely as well, though that isn’t recommended when on the low-light dives.

Part of Mirai’s objectives is to scan marine life. She can do this by pressing the L button to set up the scan and then hold the R button when the specimen you are trying to scan is withing range and inside the reticle. You will know when a creature is in range as a small white circle outline will appear on them. When the creature has been scanned it will be recorded in your records.

There are 47 different marine species featured in Beyond Blue but some species are more abundant than others. You can find the Giant Squid once but other critters like the Comb Jellies (43) or Whitetip Reff Sharks (27) are much more abundant and each one can be independently found and scanned.

At any time during a dive, the player can press the left arrow button on Joy-Con (or left D-pad button on the pro controller) to enter photo mode. You can use photo mode to pause the game and take screenshots. You can zoom and rotate the camera to get your subject into view and you can also make other adjustments like removing Mirai from the shot completely, use lighting, and/or remove the underwater particles or “Snow”. Though the photo mode may be missing effects like filters, it can still capture pretty amazing snaps that would make professional underwater photographers jealous.Trying to find every single specimen to scan can be quite a massive undertaking but it isn’t essential to the game and not required to beat the story. Also, you only have to scan one specimen of each species in order to register it in your Science Log. The only real benefit to finding all of the specimens of the same species is that you will add more entries to that species’ log.

Beyond Blue is not a particularly long game. The main story can be played in about four hours or so. After rolling the credits, you will be able to dive any of the dive sites that you have previously visited without restriction. You will also be able to return from the dive at any time. This is handy for those that would like to finish scanning any missing critters from their science log or if they simply want to dive back into the big blue once again and enjoy the scenery and ambience.

While the story of the game is quite short, it is still very impactful. The narrative of the game was inspired by OceanX and their extensive research into the Earth’s oceans. It also takes a lot of inspiration from the BBC TV series Blue Planet II. But that isn’t all. The developers of Beyond Blue enlisted the help of world-renowned oceanographers including Dr. Sylvia Earle, Dr. Mandy Joye, and David Gruber to lend their expertise in oceanography to help make the game be as natural and as realistic as possible.

Beyond Blue is not just a SCUBA Diving Simulator with pretty corals and fish to see. It is an informative educational tool that teaches the player about the wonders of marine life as well as the importance of its ecosystems. There is a lot that someone can learn from playing this game and a great number of the facts are as true in the game as they are in real-life.

For me, Beyond Blue is the one game that I have truly been longing for on Nintendo Switch. I love my diving simulation games and have played my fair share of them on Switch but Beyond Blue is by far my favourite one yet. While it has its moments of fantasy like being able to dive at 4000 metres below sea level in little more than a wetsuit, pretty much everything else in the game is 100% factual.

The attention to detail in the animal models and the environments is truly astounding. I could literally spend the better part of the day casually swimming around in the game or even not swimming around at all. I could just start a dive and then leave the game running and watch the marine creatures swim around the screen.

Yeah, there are some things like the seaweed and the coral models not looking very smooth, especially from a distance. However, you can see that the developers did everything they possibly can to make every detail in the game look as realistic as possible within the confines the game engine they were using.

If you are looking for a realistic scuba diving game on Nintendo Switch, then we can comfortably say this is it. Beyond Blue beautifully captures the essence of the oceans and is thouroughly entertaining whilst being informative on the importance of our oceans and everything in it. I can’t wait to dive back into it all over again.

Beyond Blue: (The Gameplay)