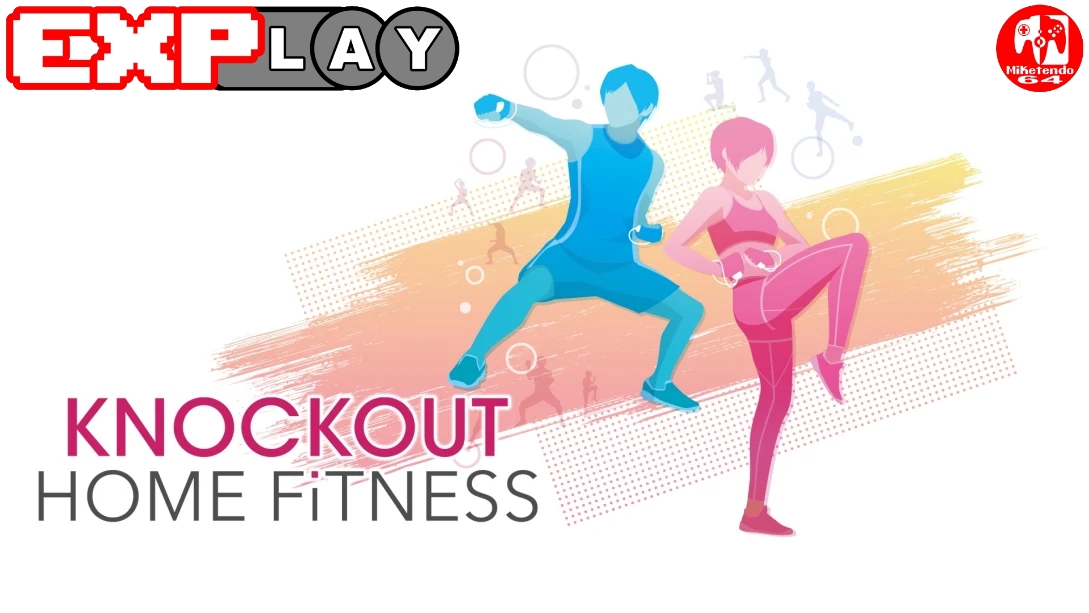 Welcome to EXPlay, (Explain & Play) the review series where we care not for scores but tell it how it is when it comes to every game we get our hands on, whilst also taking the time to include some lengthy gameplay, to give you the reader, the chance to shape your own impressions and views whilst watching and reading. In this instalment, we’re covering Knockout Home Fitness by developer and publisher, Pocket.

Previously released as FiNC Home Fit in Japan last year (October 28, 2020), the time has come for the western release of Knockout Home Fitness and don’t worry if you were hoping for an exercise game on the Nintendo Switch that offers something a little more than just jabs, hooks, uppercuts, weaves and side-steps, there is a chance you might actually be impressed by Knockout Home Fitness, especially when this game also offers a variety of kick and knee actions, accompanied by two-handed punches. Put it simply, instead of boxing, in this Pocket developed fitness game, the actual exercises are all martial arts inspired and covers karate, Muay Thai, kung fu, kickboxing and then regular boxing as well.

Still, this game is more than just the work of Pocket and publishers, Marvelous and XSEED, as like its previous title teases, the game was created in partnership with FiNC, who via their personal training app, to date, have helped over 10 million people with fitness in their own home and now they’re ready to help you, the players, with your very own workout desires. Just keep in mind that, unfortunately, the game only offers a total of four instructors, with just the one available from the outset, and while the game will allow players to input their height and weight and try to tailor their exercise experience in a way that will best serve their personal goals, Knockout Home Fitness is a game that is limited in many areas.

Players are only able to enjoy the game’s Personal Training Mode, once per day and to make things worse, although they can gain access to 3 Minute Fitness and replay any available exercises as many times as they would like, whereas Fitness Boxing allows you to gain access to more by playing through each one, with the completed current one unlocking the next one, you will not be able to do the same in Knockout Home Fitness, unless presented with new workouts during your Personal Training Mode session, which again, refreshes daily and can only be played once.

At the risk of making things worse, while the game’s soundtrack covers a wide genre of music, (EDM, Techno, Trance, Rock and Hip Hop), there are only 25 tracks in total and with regards to studios, the background of the room’s your personal trainer occupies during each workout, there are only a total of three and upon starting out, you will only have access to one.

For the sake of positives though, where Knockout Home Fitness does deliver, is in the exercises themselves. I love the explanations given for each action that can be performed and the demonstrations for how each one is meant to look and I love the personal satisfaction it gives me, each time I successfully pull off a fast-paced combo that compels me to manoeuvre my 250 lbs mass in rapid succession. The more you put into this game, the more you will feel the burn and it’s great to have that kind of result. However, while players will be given prompts as to what actions they will need to perform, as well as when and how, it is very easy to make a mistake the second you lose focus.

Instead of two bars on either side of the screen for players to follow, with the left-hand side clearly being left-handed/legged focused actions and the right bar being for actions involving the right-hand side of your body, Knockout Home Fitness sticks all actions together and separates the right from the left by making all left-handed actions being associated with the colour blue and the right-handed actions being red. A nice subtle difference between the two, but trust me, the way this game can throw curveballs at you, it becomes insanely easy for the game to knock you off balance and throw you off track.

Personally speaking, during my time with Knockout Home Fitness, I have really come to like some of the game’s exercises more than others, but, during my sessions, I have found discovered a few disappointing facts. While the game encourages players to perform each action exactly as intended, the truth is, there’s no need to. If you were to sit down on your sofa and just shake each Joy-Con when instructed to, at the right time, you’ll still score an “Excellent” and the game will be none the wiser.

So, should you tire yourself out too soon during your 10 or 30 minute exercise, there is no reason to remain standing as you can simply sit down and cheat the game, as you cheat yourself out of a proper sweat and reap all the awards as you gain trophies, unlock new BGM tracks, new backgrounds and new instructors. I absolutely detested this workaround method when I discovered it in the Fitness Boxing games, and I still hate it now, especially when, for me anyway, it is a control gimmick anyone can exploit at any point and devalues any and all efforts made to play the games the way their developers and publishers intended.

There’s a huge variety of actions for players to perform, but, despite as enjoyable an experience Knockout Home Fitness is, it does offer a smaller ensemble of instructors, backgrounds and BGM tracks and just because the game will push you to master your Muay Thai and Kung Fu techniques in perfect timing to the beat, by no means does it mean you are ready to battle Muay Thai masters. Leave the Kung Fu at home kids.