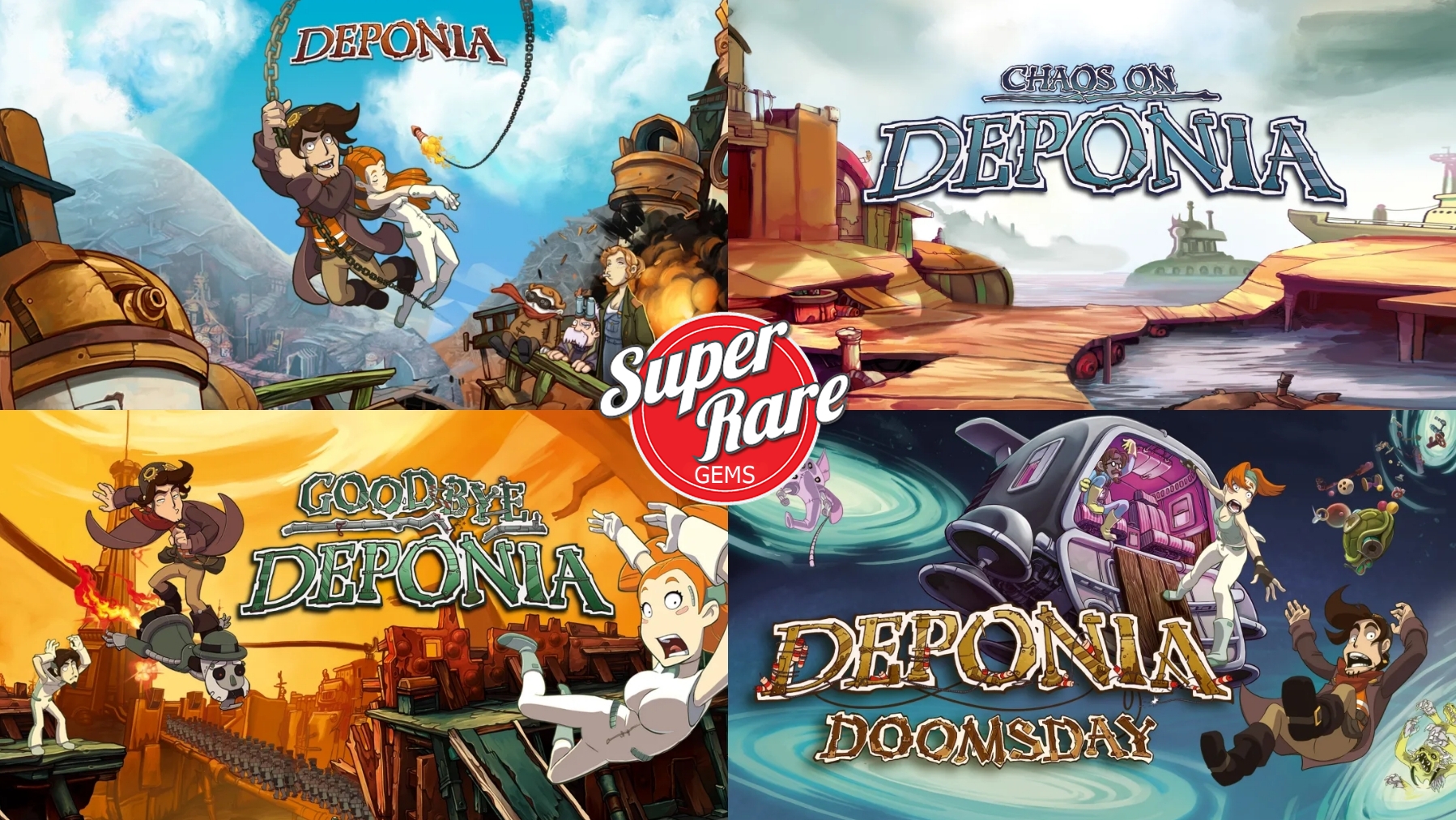 With a large library of titles under their belt and tons of limited releases that have sold out and Miketendo64 providing them with some extensive coverage on the site, we want to take the time to highlight the games they currently have left in stock, and who knows, you might just discover the next indie gem you want to pick up? So, please join us as we provide you with a ton of details on the Deponia Collection by developer Daedalic Entertainment and yes. it is comprised of all four Deponia games:

In Deponia, the world has degenerated into a vast garbage dump, in which the crotchety Rufus ekes out his sorry existence. He is part of the lowest social class, doomed to live his life in literal mountains of trash. He hopes for an opportunity to get into the world of the rich, who live in a floating city high above the clouds. Fate seems to smile on the snotty good-for-nothing when one day the attractive lady named Goal from the higher sector plummets into one of the trash heaps. Rufus decides to help the young woman out by taking her back to her husband. When he notices that Goal’s husband is a dead ringer for himself, he hatches a diabolical scheme to gain access to the upper world. However, things don’t work out quite as planned, since he has feelings for the beauty which limits his usual unscrupulousness.

Help Rufus, the poor boy from the junkyard, to win over the girl from heaven. Only with this rich girl from his dreams he might be able to escape Deponia and, unexpectedly, to save the planet.
• Unique comic style with hand-drawn HD resolution 2D graphics
• Bizarre characters and wacky humor
• Challenging puzzles and hours of dialogue

With this long-expected sequel to the critically highly acclaimed and lavishly praised Deponia, the player enters round two. Chaos on Deponia turns out to be even wackier than its predecessor and instantly puts the player under its spell.

After the events on Deponia, it seems that Rufus came to his senses. He’s grown prudent, amicable, kind and caring, without any intention to cause major mayhem just to further his own selfish ends. It seems he is far from chaining himself to flaming saw blades, training torpedo-dolphins or foraging through platypus nests. Or is he?

Ultimately it’s a flaming saw blade grounding Goal on Deponia again. By accident, her consciousness gets split into three parts and stored to three different discs. Now it’s on Rufus once again to convince all three parts of Goal, utilizing his remarkable charming wits, to become one again, venture to Elysium with her and save Deponia from certain doom while he’s at it.

More chaos, more destruction, more Rufus. Not one, not two, but three Rufuses cause all kinds of crazy mayhem in the long-awaited adventure comedy Goodbye Deponia!

The Organon plans the destruction of Deponia, the lovely Goal has (once again) disappeared, and anti-hero Rufus just can’t seem to stop getting in his own way.

All inventor and free spirit Rufus wanted to do was to get off the junkyard planet of Deponia and move to Elysium, the paradise orbiting Deponia as a spaceship reserved for the highest echelons of society. Goal, the ex-Elysian girl that Rufus has fallen head over heels for, still seems to be the key to his endeavor…and to the elevator that will get him to space. Finally, Rufus has come up with a seemingly perfect plan.

And yet, everything that could possibly go wrong suddenly does go wrong. Rufus finds himself (initially in disguise) on a highway cruiser amongst stern-faced officials of the Organon, while Goal goes missing. When Rufus stumbles upon a cloning machine, he believes to have found his way out. A clone copy is supposed to help him out of his predicament. But an “”inexplicable”” error causes complications and Goal slips from our hero’s reach once again. Now, he has to solve three major problems: He needs to find Goal again, reach Elysium and prevent the destruction of the entire planet of Deponia by the hand of the Organon.

Three problems that only three Rufuses could solve – and thus, the luckless inventor decides to clone himself! This leads to crazy ramifications for the player: In Goodbye Deponia, the player occasionally needs to control all three Rufuses, using them to complete tasks together – despite Rufus stumbling over himself so often.

One fateful night, Rufus awakes from a haunting nightmare: he sacrificed himself to save Deponia. But at what price? Elysium, the floating city crash-landed on the planet. As the last surviving Deponian, he fought savage fewlocks, but in the end, there was only one way out: He had to blow up Deponia! And… He grew a mustache.

Of course he realized that these gruesome events -especially the mustache part- had to be prevented from ever happening. Deponia and his well-shaved face had to survive!

But was this really just a dream? With the help of McChronicle, a quirky temporal scientist, who discovered strange time-anomalies, Rufus discovers that some time travelers from the future carelessly parked their time machine in his neighborhood. Just imagine if this amazing technology would fall into the wrong hands!

Dive right into this frantic sequel of the Deponia cult-trilogy and join the chaotic anti-hero Rufus on his most peculiar adventure. Even without knowing the previous installment, the hilarity of Deponia Doomsday will have you cracking smiles and burst with laughter.

Get enthralled by the bizarre humor and the uniquely designed world and enjoy the largest and longest Deponia adventure of all time.
• A new installment of the award-winning Deponia Series
• Epic adventure gameplay
• Unique hand-drawn comic style
• Familiar faces and more than 70 new crazy characters featuring the whacky humor you love so much
• Turn back time and see a new spin on the junk-planet’s history
• Platypus-tastic action
• Junk meets decadence: playable levels on Deponia and Elysium
• Discover the lush flora and fauna of Deponia

The physical release of Deponia Collection also comes with the following:

For more on Deponia Collection, why not pay a visit to its official listing on Super Rare Games with the link below: