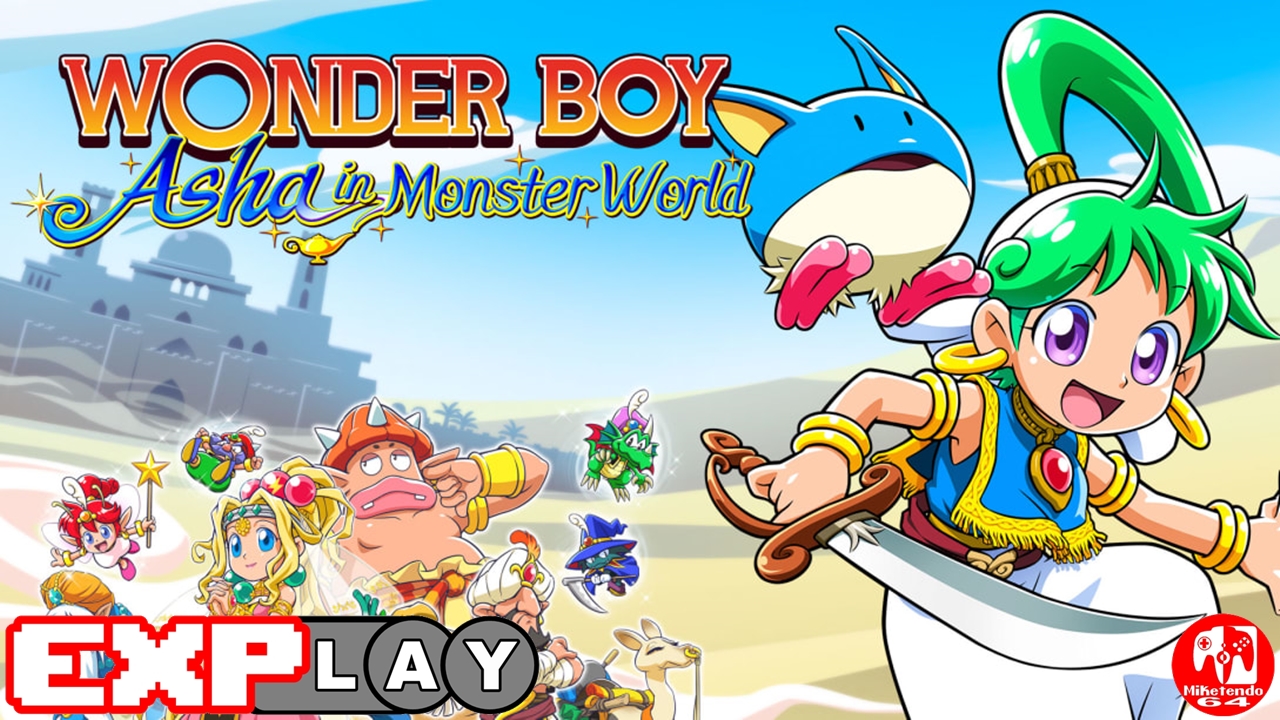 Welcome to EXPlay, (Explain & Play) the review series where we care not for scores but tell it how it is when it comes to every game we get our hands on, whilst also taking the time to include some lengthy gameplay, to give you the reader, the chance to shape your own impressions and views whilst watching and reading. In this installment, we’re covering Wonder Boy Asha In Monster World by developer MONKEY CRAFT.

Wonder Boy Asha in Monster World is a full HD remake of the classic SEGA Mega Drive game Wonder Boy IV. Contrary to what the name suggests, you actually play a girl called Asha (Wonder Boy is the name of the series after all). Asha is ready to become a knight and must overcome the trials of the Tower of Silence. Meanwhile, dark forces are at work to capture the guardian spirits of the world.

As Asha completes the trials of the Tower of Silence, she finds a golden lamp with a Lamp Spirit inside. The Genie congratulates Asha and tells her that he can take her to the Palace of Rapadagna where the queen will accept Asha as a Warrior. Asha agrees and is taken to the Palace. When she arrives and meets with the queen, her royal highness accepts Asha as a warrior and requests that as her duty as a warrior, Asha must rescue the captured spirits.

So, what kind of game is Wonder Boy Asha in Monster World? Well, it is a 2D action platformer game that puts you in the role of Asha. Armed with a sword and a shield, Asha can attack enemies and block enemy attacks. By defeating enemies in your way, you can earn gold, hearts, or blue tears from them. Gold is the main currency of the game and is required to buy items, weapons and accessories.  Hearts will replenish Asha’s health and blue tears can increase Asha’s health by one if she collects 10 of them.

In order to rescue the spirits, Asha must be well prepared for the difficult task ahead but she doesn’t have to go it alone. Inside the palace vault Asha will find an egg that will provide her with her very own companion called a Pepeloglu. This little critter hovers around Asha and can help her glide over long distances, be thrown to collect coins or activate switches and more.

Asha must traverse through multiple dungeons overcoming numerous perils and enemies, only to take on a big boss waiting for her at the end. Some areas may trip you up at times as it is not always clear what it is you need to do.One example is Hundera Volcano. It took me a good while in that dungeon to figure out that I could throw Pepeloglu into the lava geysers and climb on top of it, thus allowing me to reach the upper section of a room and progress forward.

The visuals and audio have been given such an incredible overhaul in Wonder Boy Asha in Monster World. If you are a fan of the original Wonder Boy Games then you will surely love this game too. After all, a number of the original development team all came together to create this game. This isn’t just a senseless remake, it is a passion project to remake a classic and iconic game so it can be enjoyed by new gamers and old gamers alike.

One final note that I must touch upon is that for anyone who purchases Wonder Boy Asha in Monster World physically, they will also recieve the original Wonder Boy IV as well. The original game is exclusive to the physical retail edition of the game and is not available with the digital version. If you do wish to buy the game physically, you can try a number of online retailers like Amazon or Strictly Limited Games (This is NOT an affiliate Link).

Note: The digital version of Wonder Boy: Asha in Monster World can be purchased from the Nintendo and Sony stores and is published by STUDIOARTDINK.